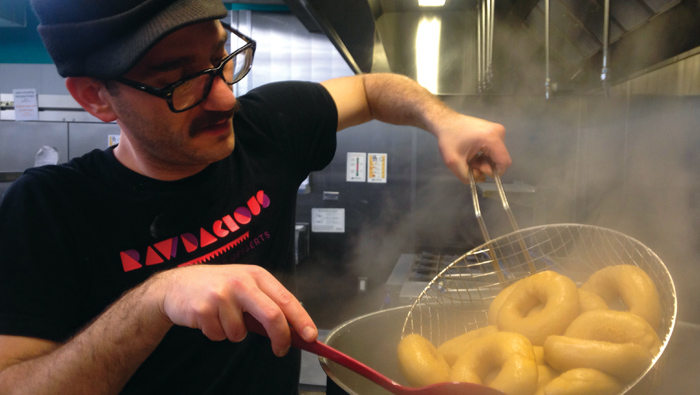 Noah Bernstein first became enamored of bagels as a child in Burlington, VT. The chewy, round breads were often part of his Jewish family’s meals.

“I have a bagel-eating background, I guess,” he says with a laugh. “I grew up eating them. In Burlington there was, and still is, a handful of really great bagel makers. They’re right in between New York and Montreal, and the bagels reflect that.”

But it wasn’t until many years later, after Noah had become a touring jazz saxophonist, that he discovered his own knack for making bagels. “My brother sent me a Cook’s Illustrated magazine,” he explains. “It was a baking edition with all these bread recipes, and one of them was a bagel recipe. I started making them then.”

By this time, Noah had made Portland his home. When he would return home between trips, he found himself missing the structure of his regimented touring schedule.

“Getting back home, you totally lose that,” he says. “I started baking bread, and it was a great way to be like, in four hours I have to get back to this dough and knead it some more, and then in two hours, I have to knead it again and put it in the oven. It was this very nice sort of time regulation. Bagels are the pinnacle of that. You knead them and then they sit out for a bit, and then they sit in the fridge for a long time, and then you go back to them a couple days later and see what they’ve done, and then boil them and bake them. It’s such an intricate process.”

Noah attended a weekly jam session at the home of local saxophonist David Valdez. He started bringing buckets of bagels, which the musicians would munch on between tunes.

“That was a great starting point for me, spreading the word at these iconic ‘bagel jams,’ ” he says.

It didn’t take long for word to get out, and soon Noah was delivering his bagels all over town. Not only did he land accounts at coffee and tea shops, he also developed a network of fans in office and apartment buildings. Native East Coasters developed a special affinity for Noah’s product.

“A lot of advocates (from there) were like, oh my gosh, these are the best bagels I’ve had since moving out here. Those have been my most solid, steadfast customers so far,” he says.

But Noah’s end goal had never been to own a delivery service. He’d always dreamed of opening a brick-and-mortar bagel shop. So when he got word that a storefront was available for rent in St. John’s, he jumped at the chance to transform it into Bernstein’s Bagels. As of this writing, the store is set to open at the end of April.

Devotees of Noah’s exceptional bagels will find their old favorites alongside some new creations at the shop.

“The everything bagel has been very popular, and that’s also my favorite,” he says. “The salt bagel has been really surprising, too. Having our own storefront, we’re really going to have some time to work on some new flavors and bases. I’m really excited to make an egg bagel as well as a pumpernickel bagel. I love pumpernickel, and I miss being able to eat it.

“All the bagels are vegan. We’re going to start out just with bagels and cream cheese, butter or hummus. And drip coffee. We’ll start incorporating in some breakfast sandwiches, maybe a few lunch sandwiches, and we’d love to start making some pizza bagels in the not-too-distant future.”

For those who miss the convenience of home bagel delivery, Noah says he might eventually contract with a local service. But he’s primarily focused on bringing the highest-quality bagels to a local community of bagel lovers.

“There’s a great community really built into St. John’s; it’s such a lovely neighborhood. We’re hoping that will be sustaining for us.”

This writer’s opinion is that Noah’s bagels are well worth the trip. So even if you don’t live anywhere near St. John’s, you will want to pay a visit to Bernstein’s Bagels.