David Kolasky wasn’t sure what to expect when he moved his family from Philadelphia, PA, to accept a hospital administration position in Toledo, OH, in the early 1980s. But what was supposed to be a two-year stint turned into 30, and it was there that he discovered the medium that ignited his passion as an artist.

Toledo earned its nickname of “The Glass City” in the early 1900s because it was a manufacturing hub across the glass industry –­ bottles, window glass, tableware, windshields and construction materials.

Glassmaker Edward Drummond Libbey founded the Toledo Museum of Art in 1901and it quickly amassed several significant glass collections. Today, the museum’s American glass collections are one of the largest of its kind and contain objects of exceptional quality of historical importance.

A significant component of the museum is also community education, some of that being through art classes. It was there that David took his first glass blowing class.

“I spent a lot of time there,” says David. “They built a glass pavilion, where all the walls in the facility are glass. So you can see what people are doing (making glass objects). It was just a remarkable place.”

“I would go down there two to three times a week, and there was always an empty space to blow, and I would blow a couple of things,” says David. “It was a community. If someone needed help (with a piece of glass), we would help each other. It was such a different community than I grew up in, in my button-down world of hospital administration.”

David would sell his glass at various art shows across the Midwest, including the prestigious Ann Arbor Art Fair. 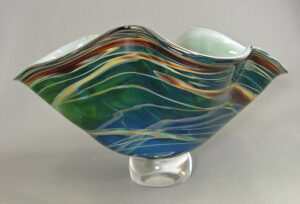 “I did that for a number of years, and I was able to buy a MINI Cooper – it was my midlife crisis,” jokes David. “But then we moved here to Portland, and I couldn’t find a community to blow glass in.”

David and his wife, Betsy, a retired teacher, moved to Portland in 2013 to be closer to their daughter  Dr. Rebecca Spain and their two (now three) grandchildren. Their other daughter Maggie is in the fashion industry and lives in Australia with their other two grandchildren.

In search of a new creative medium in their new home, David discovered ceramics at the Multnomah Arts Center.

David says that during the pandemic, he has continued to work on his ceramics in his basement. He also discovered a new art form – woodworking.

“I bought a lathe and put it in my daughter’s garage, and I go there every day,” he says. “It’s fun working in the garage. The door is open, and people are coming up and down the alleyway, and they’ll stop and watch.”

David says that the other day two women stopped and asked him what he was doing. He replied that he was making some bowls and that they happened to be for sale. When one of the women said that she would buy one of the bowls, David told her that they were 10% off if she bought two or more – so she bought both of them.

He jokes that he enjoys schmoozing with people and would notice when he did art shows that many artists would not interact with the people. 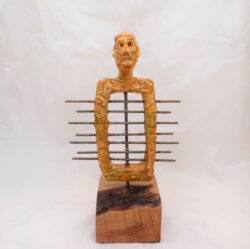 One of David’s ceramic pieces

“My feeling is people are buying the art, but they’re also buying you, where the art comes from and who made it,” says David. “And they’ll tell their friends, ‘Look at what I bought at the art show, and I met the artist who made it,’ and they have a little story. It all goes together.”

In Portland, David is part of the ORA: Northwest Jewish Artists, which have art shows at the Mittleman Jewish Community Center (they have done online shows during the pandemic). He jokes that some of his art isn’t welcome at the shows.

“It’s been a tough sell with the Jewish artists here in town when I say I’m going to bring a bunch of knives to the Hanukkah show,” he jokes. “They’re beautiful, but they say, ‘No, knives are not art,’ and I say, ‘Everything is art. Anything is art.’”

He learned metalwork in Toledo and goes to a blacksmith in Vancouver, WA, to make his knives. He also learned welding from the same person in Toledo who taught him knifemaking, and he has used that skill to make stands for his glass pieces.

When you ask him, David responds that glass blowing is still his favorite medium.

“There’s something sensuous about it ­– it glows, it shines, it’s translucent, or it’s clear – you can’t get that with any other medium,” says David. “And the other thing is, you rarely get any second chances. There’s an immediacy to it, and it’s exciting.”

David says that he might like to try bronze casting next but jokes that that may be the end of his 53-year marriage. Part of the problem he says may be that whenever he picks up a new art form, he doesn’t get rid of any previous ones.

“It’s just great fun. I’m happy I evolved into this, and I’m looking forward to the next evolution of David Kolasky.”

For more information, or to view David’s art, visit dkhandworks.com.