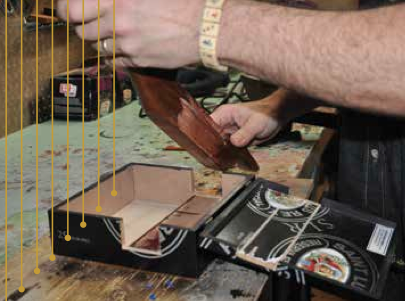 Sony sold his first cigar box guitar last summer. By year-end he had sold 100 of his handcrafted creations. Three models of his solid, arty, easy to play guitars now are available in five retail outlets in two states, and he is gearing up to greatly expand production this year with a dream of “capturing the West Coast market.”

A first-generation American (his mother, whose “cloudy” heritage will be explained later, emigrated from Hungary after World War II), Sony says the idea of running a cottage industry type of business has long appealed to him. But he began his working life as a sound engineer. He worked as a music engineer in a recording studio before going on tour with Pearl Jam and Red Hot Chili Peppers as part of their sound crew, and he did the sound effects for Bill Nye the Science Guy. He still has his own recording studio in his Multnomah Village home, where he and his wife, Jennifer Felberg, typically work with one band a year to record an album.

For 10 years he detoured into the digital world, working as director of video services for Realnetworks. But he continued his home studio work and kept his artistic juices flowing through painting.

“I’m a music engineer, so I can’t do anything without knowing how it works,” he says.

So when Jennifer balked at him buying more guitars, he decided to make his own. Since cigar box guitars don’t have the curved bottom of standard guitars,
his first model slipped off his lap when he tried to play. On his second try, he extended the solid stick through the cigar box to create a butt that grips comfortably under the arm or rests on the lap securely.

“It’s fun acoustically, but guitar players like to be loud,” he says, so he added electronics so his guitars can be plugged into an amplifier. His new 2014 design has full pickup and volume and tone knobs – “ready to go on stage.”

Laid off from his digital job, he kept crafting and refining his instruments. Soon he had a basement full of guitars. He posted one on Craigslist, but discovered it took more work to sell it online than to make. So he decided to explore the retail market.

Sony took a few of his guitars to Trade Up Music. The manager was impressed by the solid construction, beauty of the guitars and the sound quality, so he agreed to stock them on commission.

“I got halfway home and I got a call from Trade Up,” says Sony. “The manager said the owner had come in and seen the guitars. I was sure he was going to tell me to come and pick them up, but instead my first sale was to the owner of Trade Up.”

Not wanting to be wasteful, Sony soon added another model to his repertoire.

“You use the top three strings of the standard six-string package for cigar box guitars,” says Sony. “The bottom three strings of each package you throw away. So I shortened the neck of the guitar to use the other set of three strings. … The mini guitar is my own invention.”

Leading up to the holiday season, Sony says he was barely able to keep up with the pace of sales. He was selling around six a week.

“They are an impulse buy,” says Sony. People pick up the pretty, unusual instrument and are impressed with the solid construction and fact that anyone can sound good just strumming the strings.

He recently signed an agreement to have a partner with a CNC machine create the “blanks.” With the CNC his partner can computerize and rout the neck cuts and drill holes for a basic stick blank, which Sony says is a mind- numbing process to create by hand. Sony will still hand carve the blanks into the finished stick for
each guitar. Having blanks will enable him to at least double production, and he says the quality- controlled neck introduces the possibility of another
craftsman making guitars.

Sony doesn’t sell any guitar he can’t have fun playing himself. If it doesn’t sound good, he won’t sell it. He did however give two of the visually beautiful, but not so beautiful sound- ing, cigar box guitars to Paul’s Cigar Shop to hang on the walls. Because, yes, cigar box guitars are made with real cigar boxes, and Sony gets his
from Paul’s.

Sony says the smell of cigars takes him back to his childhood and some unexplained parts of his heritage. As a boy his parents, Sandor and Berta Felho, often took him to Hungary to visit uncles, who all smoked cigars.

Raised with no religion, Sony says looking back he now realizes his mother’s “cloudy” family story likely concealed Jewish roots. Berta died when Sony was just 22, but he remembers stories of papers doctored in Austria, an aunt needing to use Berta’s papers to escape to Switzerland, Berta and her sister volunteering to go to the Russian front as nurses, and his grandmother buried in a mass grave “with everyone else who died that day.” When he was 13, Sony says his mom inexplicably took him to get a suit since he was “a man.” She also told him that all of her business partners were Jewish, because you could trust them not to cheat you.

Sony extended that advice to include his choice of a life partner. He says when he met Jennifer Ginsberg, daughter of Portlanders Bob and Carol Ginsberg, she told him he “knew way too much about being Jewish to not be Jewish.” Since he wasn’t sure of his heritage, he went through a full conversion at Herzl-Ner Tamid, a Conservative synagogue in Seattle. When he and Jennifer married, they combined not only their lives, but also their last names to create Felberg.

Jennifer, formerly an opera and rock vocalist who serves as vocal producer when they record bands in their studio, is the activities director for Cedar Sinai Park. The couple has two children, Moses, 14, who celebrated his bar mitzvah in Seaside last year, and Ginger, 12, a ballet dancer who is currently studying with Eddy Shuldman for her bat mitzvah. The two attended Portland Jewish Academy until moving to Robert Gray Middle School.

“They had a wonderful experience at PJA,” says Sony. But he says in public school they are now “getting some mileage” out of their parents’ history with rock bands.

And Sony is getting some mileage out of all his diverse experiences and skills as he grows toward his goal of cornering the cigar box market on this coast.