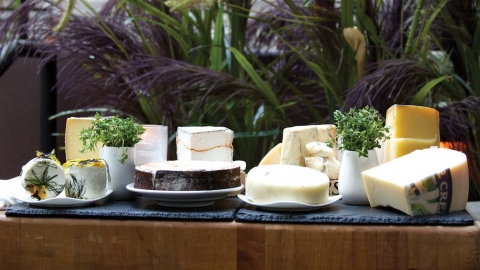 The region’s exquisite wines call for cheeses with complementary flavors and fragrances.

You don’t have to be a connoisseur to choose a good cheese, but an awareness of local offerings can help you create an unforgettable plate.

Take the advice of Lindsey Walton, artisane du fromage at Urban Farmer, a restaurant with a farm-to-table theme, located at The Nines hotel in downtown Portland.

She maintains that the wine should be the sweetest thing on the table.

“Pick your wine first, and go from there,” she counsels.

You’ll soon acquire a new vocabulary to express your appreciation of cheese.

“A local, bloomy-rind soft sheep’s milk cheese from Ancient Heritage Dairy is buttery and herbaceous,” says Walton. “It goes nicely with a 2010 Adelsheim from Willamette Valley; the hints of papaya, apples and pears blanket the mouth.”

One of Walton’s favorite cheeses is the chevre from Rivers Edge in Logsden. “I always have one on the cart.”

She pairs a Chenin Blanc 2010 Champalou Vouvray with the truffled, flower-studded Spring Summer Crottin. “The wine’s streak of minerality cuts through the soft chèvre,” she notes.

Among the blue cheeses, Walton favors the Roquefort Gabriel Coulet “La Petit Cave,” which is sometimes known as the “king of cheeses.” “This French blue is somewhat sweet with a touch of saltiness. With a Columbia Valley Dunham Cellars 2009 Late Harvest Riesling, it’s unforgettable.”

She also roasts Marcona almonds with thyme, olive oil and salt and sprinkles some fresh herbs on the plate.

According to Walton, one of the best ways to complement a cheese plate is to simply include a flask of lavender honey. “You can’t go wrong with it,” she says. “It goes so well with blue, cheddar, chevre, harder cheeses – it’s just a perfect pairing.”