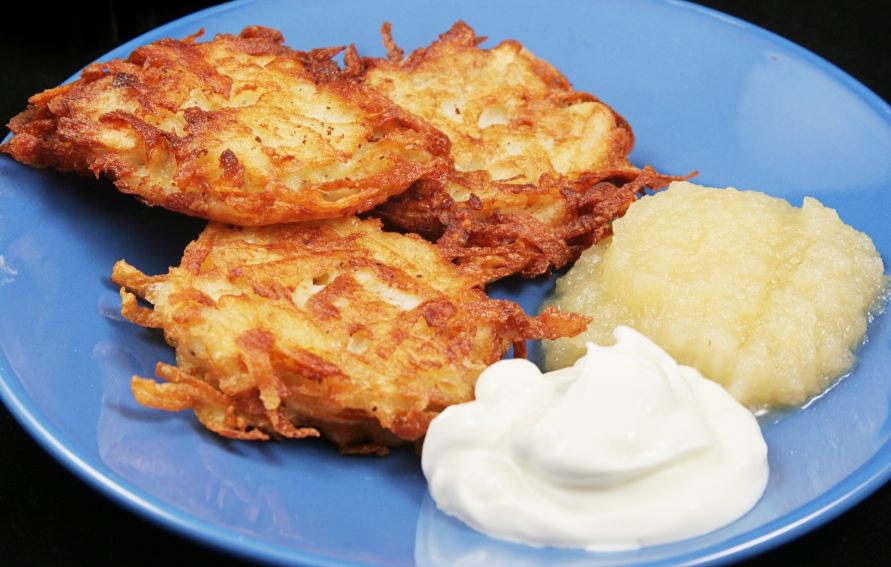 In a large skillet, heat an 1/8-inch layer of oil until shimmering. Spoon 1/4-cup mounds of the latke batter into the skillet about 2 inches apart and flatten slightly with a spatula. Fry the latkes over moderately high heat, turning once, until golden and crisp, 5 to 7 minutes. Transfer the latkes to paper towels to drain, then transfer to a platter. Repeat to make the remaining latkes, adding more oil to the skillet as needed. Serve with applesauce, sour cream, smoked salmon and salmon roe.

Make Ahead
The latkes can be fried early in the day; recrisp on a baking sheet in a 350° oven.

Suggested Pairing
Salty, crispy fried foods like latkes are made even better when paired with sparkling wine–either Champagne, like the NV Nicolas Feuillatte Brut Réserve, or something more affordable, like the NV Vilarnau Brut Cava from Spain.

After testing five classic latke recipes, Patty Catalano from The Kitchn determined the essential ingredients and has culled the cleverest techniques to bring you this very recipe. 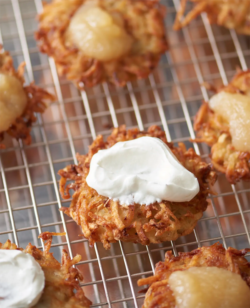 Scrub the potatoes well, but do not peel. Cut each potato in half crosswise. Grate the potatoes and onion using the shredding disk of a food processor.

Add the potatoes, onion, eggs, matzo meal or breadcrumbs, salt, and pepper to the bowl of starch. Mix with your fingers, making sure that the potato starch breaks up and is evenly distributed with the rest of the ingredients. Set batter aside for 10 minutes.

Place the oil or schmaltz (or a combination of the two) in a large skillet so that when melted there is a depth of 1/4 inch (for a 10-inch skillet you’ll need 1 cup of melted oil/schmaltz). Heat over medium-high heat until a piece of the latke mixture sizzles immediately.

Scoop 1/4 cup of the mixture onto a fish or flat spatula. Flatten with your fingers to a 4-inch patty.

Transfer the latkes to a paper towel-lined baking sheet to drain for 2 minutes.

Serve immediately with applesauce and sour cream, or transfer the latkes to the wire cooling rack set in the baking sheet and keep warm in the oven for up to 30 minutes while you continue cooking the rest of the latkes.

Make ahead: Latkes are best made and served right away. They can be fried and kept warm in a 200°F oven for up to 30 minutes.

Storage: Refrigerate leftovers in an airtight container and recrisp in a 300°F for 5 to 10 minutes. Keep a close eye on the latkes when reheating so they do not burn.

Doubling: The recipe can be doubled, although you will need an extra sheet of cheesecloth to squeeze the extra potato and onion shreds. The oil (and schmaltz, if using) will need to be replaced halfway through frying. Pour the used oil into a heatproof bowl, wipe out the skillet, then heat fresh oil and continue frying.