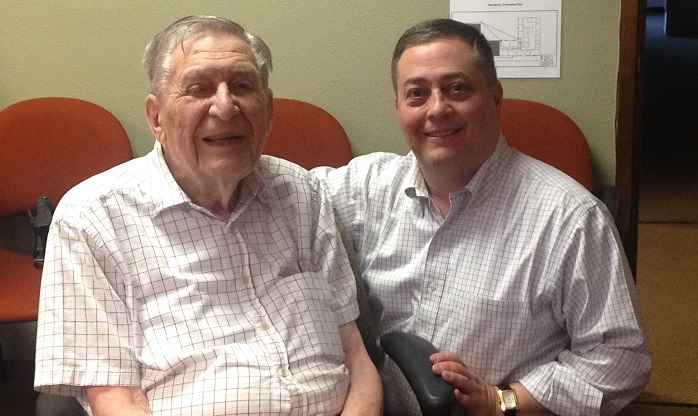 PHOTO: While visiting camps and meeting camp leaders in Oregon, Foundation for Jewish Camp CEO Jeremy Fingerman stopped by to see an old friend, Rabbi Joshua Stampfer, who officiated at Jeremy’s 1973 bar mitzvah in Jerusalem. Jeremy says, “I brought with me the Tanakh which Rabbi Stampfer inscribed to me as follows many years ago: ‘Presented to Jeremy Fingerman in the Eternal City, Jerusalem, on Shabbat Vayigash, December 29, 1973, in celebration of his Bar Mitzvah at the World Council  of United Synagogue Center.’ Very special indeed!” In 1954, Rabbi Stampfer founded Camp Solomon Schechter near Olympia, WA.

“I have the best product to sell – Jewish summer camp,” said Jeremy Fingerman, CEO of the Foundation for Jewish Camp, during a visit to Oregon last August. Quite a statement from a man with a 20+ year career in consumer packaged goods  – beginning at General Mills Inc., then Campbell Soup Company and finally as CEO of Manischewitz.

“There is nothing else in our Jewish community that is as effective as camp,” says Jeremy. “It is joyous Judaism. Kids are having a wonderful Jewish experience at 160 different overnight and 150-plus day camps. The smiles are the same. Judaism is vibrant and alive.”

Jeremy discovered the joy of Judaism and made lifelong friends as a child during many wonderful summers at Camp Ramah in Wisconsin. He started his Jewish communal work in high school, serving as international president of United Synagogue Youth.

A self-proclaimed “camp fanatic,” Jeremy says his goal is to get more kids to Jewish camps. To achieve that, he focuses on three areas: building leadership through professional development; amplifying Jewishness and Israel education at camps; and expanding the field by attracting more campers.

FJC’s One Happy Camper grants of $1,000 for first-time campers has had a tremendous impact on increasing camp participation. In Oregon alone, 374 new campers went to camp with this incentive grant over the past five years. And the retention rate is amazing – “87% return for year two,” says Jeremy. “Once we get them in the door, they stay. Camp delivers.”

“Jewish camps are in the business of making mensches,” says Jeremy.

As a “brand guy,” Jeremy says he wants to expand the FJC brand to include Israel trips in addition to overnight camp and day camp. “We have had camps expand their brand,” he says. For instance, this summer BB Camp will offer a day camp in Portland. “Day camps are the first Jewish experience for many families,” says Jeremy.

Specialty camps are another area for expansion. There are now specialty Jewish camps including sports, wellness, environment, outdoor adventure and business.

“Not every camp is right for every camper,” says Jeremy. “Jewish kids shouldn’t have to give up anything for choosing a Jewish camp.”

“We are delighted the Jewish Federation (of Greater Portland) could provide One Happy Camper incentive grants to 118 new Jewish overnight campers attending 11 different camps spanning seven states,” says JFGP President and CEO Marc Blattner of the 2017 grants. “For many of these campers (and their families), Jewish camp is a gateway into Jewish community. Moreover, the intentionality of Jewish programming and Judaism can lead to a lifetime of Jewish involvement and commitment.”