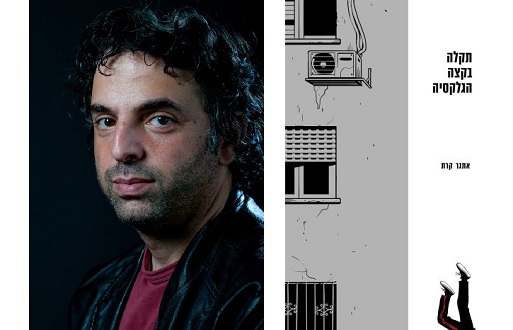 Courtesy of American Associates, Ben-Gurion University of the Negev

Etgar Keret, renowned Israeli author and lecturer in the Department of Hebrew Literature at Ben-Gurion University of the Negev (BGU), has received Israel’s most prestigious literary award, the Sapir Prize, for his collection of short stories, A Glitch at the Edge of the Galaxy.

“I’m surprised…it’s the happiest thing in the world. But like love or gifts, it’s not something you can strive for. It just happens,” Keret said. “Israeli book prizes are much more important to me than literature prizes awarded overseas. This is the language I write in, this is where I live, and that’s the most important thing.”

The Sapir Prize carries a $47,000 (NIS 150,000) cash award, and support for the book’s translation into two languages: Arabic, and a language of the author’s choosing.

Ben-Gurion University President Prof. Daniel Chamovitz congratulated Keret, saying the author’s work is both a valuable window into Israeli society and a badge of honor for the University.

“Etgar’s stories combine so many compelling elements – everyday life with fantasy, humor with seriousness, comedy with tragedy and more,” Chamovitz said. “The writing workshops he leads at BGU are very popular and are a vibrant element of our campus life.  This year he is teaching ‘Writing Secrets: Prose for Beginners’ for undergraduates, and ‘Writing for Children’ for graduate students.”

A Glitch at the Edge of the Galaxy, published in Hebrew by Kinneretz Zmora-Bitan Dvir, features 24 short stories of varying lengths. The stories, written in clear, everyday Hebrew, touch on a range of emotional issues in Israeli society: Holocaust remembrance, euthanasia, loneliness, and intellectual disability. Other selections tackle lighter subjects. One follows a goldfish who jumps out of his aquarium home in the middle of the night in order to watch television.

According to the panel of judges, headed by Professor Orna Ben-Naftali, “The book touches on the essence of the experience of disrupting the world order. Using language that appears at first glance to be ‘light,’ Etgar Keret displays a deep sense of sadness. His various characters are connected to each other through alienation, loneliness and a strong sense of being abandoned in the world, while at the same time craving love and intimacy. In the stories of this collection, Keret presents the short story genre as the refined and necessary literary expression of this time,” Ben-Naftali said.

His work has also been translated into French, Spanish, Italian, German, Russian, Norwegian and Swedish. He is married to artist Shira Geffen.

American Associates, Ben-Gurion University of the Negev plays a vital role in sustaining David Ben-Gurion’s vision: creating a world-class institution of education and research in the Israeli desert, nurturing the Negev community and sharing the University’s expertise locally and around the globe. AABGU, which is headquartered in Manhattan, has nine regional offices throughout the United States. For more information, visit www.aabgu.org.