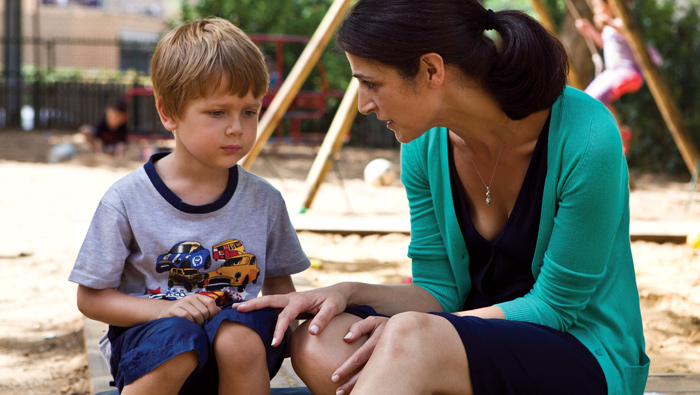 Under the influence of consumerism, militarism and the pace of the modern world, the People of the Book have little use for poetry.

That’s one reading – and the most obvious and simplistic – of “The Kindergarten Teacher,” Israeli filmmaker Nadav Lapid’s unsettling saga of an adult’s missteps when presented with a preternaturally talented child. The film’s primary focus, however, is the vulnerability of children and the competing impulses to nurture, shape, protect and exploit them.

Shot in pastels and silhouettes and employing a minimum of carefully placed music, “The Kindergarten Teacher” paints a deceptively placid surface. The titular character, Nira (the excellent Sarit Larry), is a wife, teacher and would-be poet who appears to be utterly reserved and self-contained.

When she discovers that one of her 5-year-old charges, Yoav (Avi Shnaidman), casually utters exceptional poems, Nira takes on the mission of shepherding his presumably sensitive soul around the land mines of a society indifferent (or worse) to his gifts and art form.

We gradually come to suspect that Yoav is not as introspective, innocent nor interested in art with a capital A as his would-be mentor imagines. Consequently, we start to question Nira’s ability to understand and supervise children.

That’s the moment when we feel the chill of foreboding, and realize (with the title guiding us) that the film isn’t about the crucial immediate future of a pint-sized prodigy, but rather a woman who has discovered a misguided sense of purpose. Bored witless after years on the job surrounded by pre-adolescents – and a similar tenure with her unchallenging husband – Nira is calmly in the throes of a midlife crisis.

Like a good poem, “The Kindergarten Teacher” invites interpretation and discussion. For example, the film’s disparaging references to the elevation of pop culture over high culture could conceivably be read as reflecting Nira’s perception and frustration rather than as the filmmaker’s comment on Israeli society.

Perhaps, although Nira’s husband’s remark that only stupid and poor people pursue military careers these days takes on another shade of meaning if you recall that Yonathan Netanyahu, the prime minister’s brother and the only Israeli casualty of the Entebbe hostage rescue in 1976, was a poet as well as a beloved officer.

Consequently, although “The Kindergarten Teacher” could take place anywhere – that’s partly what makes it such a disturbing and rewarding film – one needn’t be a prodigy to recognize it as a meditation on the state of Israel’s soul.