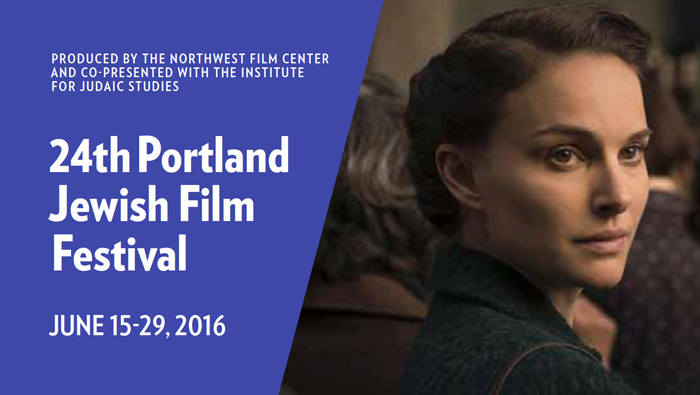 Complete schedule, tickets, and passes are available
online at nwfilm.org.

Welcome to the 24th annual Portland Jewish Film Festival, produced
by the Northwest Film Center and co-presented with the Institute for
Judaic Studies. While the Festival specifically celebrates the diversity
of Jewish history, culture, and identity, we hope that these films,
and the stories they tell, resonate beyond their settings and speak to
universal experiences and issues that confront our common humanity.

Wednesday, June 15, 7 pm
The Midnight Orchestra, Morocco, 2015
dir. Jerome Cohen Olivar (102 mins., Drama, DCP)
Michael Abitbol, the son of a once famous Jewish musician, returns
to Casablanca for the first time after leaving Morocco as a child
amidst racial tensions spurred by the 1973 Yom Kippur War. There, he
embarks on a mission to honor his iconic father’s legacy. With the help
of a comical cab driver, Michael’s search for the former members of his
father’s band unexpectedly transforms his life forever.

Thursday, June 16, 7 pm
In Search of Israeli Cuisine, Israel/US, 2015
dir. Roger Sherman (97 mins., Documentary, DCP)
“If hummus and falafel are the only things that come to mind when
you think about Israeli food, then this fascinating documentary
is a must-see. Guided by Michael Solomonov, the Israel-born,
Philadelphia-based, award-winning chef behind (hit Philadelphia
restaurant) Zahav, we explore the 70+ diverse cultures of Israel
through food. He samples food traditions, talks to a variety of chefs,
and asks them about their traditions and if there is such a thing.”—
Palm Springs Film Festival.

Saturday, June 18, 8 pm
A Tale of Love and Darkness, US, 2015
dir. Natalie Portman, (98 mins., Drama, DCP)
Based on Amos Oz’s acclaimed international bestseller, A Tale of
Love and Darkness recounts the time Oz spent with his mother, Fania
(Natalie Portman), at the end of the British Mandate for Palestine
and through the early years of the State of Israel. Struggling with
raising her son in the foreign city of Jerusalem, Fania battles her inner
demons and longs for a better world for her 10-year-old son Amos. As
a nation is born around them, Amos must come to terms with his own
new beginning.

Sunday, June 19, 4:30 pm
The Kind Words, Israel, 2014
dir. Shemi Zarhin, Sasson Gabai
(118 mins., Drama, DCP)
Embittered, spiky-tempered restaurateur Dorona and her two very
dissimilar brothers receive a bombshell when they learn the man who
raised them isn’t their biological father. This seismic shock sets them
on a quest across France to unravel their origins, tracing their roots to
their mother’s native Algiers. As they piece together the inscrutable
secrets of their past, Dorona attempts to reconcile her strained
relationship with her long-suffering husband Ricki, while her brothers
grapple with issues of familial, religious, and ethnic identity.

Sunday, June 19, 7:30 pm
Time to Say Goodbye, Germany, 2015
dir. Viviane Andereggen (82 mins., Comedy, DCP)
Twelve-year-old Simon has a lot to deal with. His life in Hamburg has
him traveling back and forth like a ping-pong ball between his recently
divorced mom and dad. To complicate matters further, his family is
religiously divided. His newly observant father Frank insists that his
squeamish son sacrifice his foreskin before his Bar Mitzvah, while
liberal-minded mom Hannah is fed up with the pious posturing of her
ex-husband. In the meantime, Simon falls head over heels in love with
his new rabbi Rebecca, and his quest to win her heart fuels a comical
family feud.

Monday, June 20, 7 pm
Censored Voices, Israel/Germany, 2015
dir. Mor Loushy (87 mins., Documentary, DCP)
The Six-Day War in 1967 ended with a stunning victory for Israeli
military forces, and was a moment of great pride for the new nation.
Yet interviews conducted by renowned authors Avraham Shapira
and Amos Oz with Israeli soldiers returning from the battlefield
paint anything but a glorious portrait of war. Censored for nearly five
decades, these recordings question the responsibility of the conqueror
to the conquered, the paradox of a people who fled oppression only to
become the oppressors, and the still-fervent hope for a lasting peace
with their Arab neighbors.

Tuesday, June 21, 7 pm
The Last Mensch, France/Germany, 2014
dir. Pierre-Henry Salfati (93 mins., Drama, DCP)
Marcus Schwarz has spent a lifetime concealing his Jewish heritage.
After surviving the horrors of Auschwitz, he has painstakingly created
a new identity for himself in Germany. But as his twilight years draw
near, Marcus decides he wants to be buried in a Jewish cemetery.
There’s only one small problem: the rabbis don’t believe he’s Jewish.
Forced to return to his childhood Hungarian village to prove his true
identity, Marcus enlists a troubled young Turkish woman to drive him
on what turns out to be a life-changing trip for both.

Wednesday, June 22, 7 pm
P.S. Jerusalem, Israel, 2015
dir. Danae Elon (97 mins., Documentary, DCP)
P.S. Jerusalem is the story of one family in search of home. After living
in New York City for two decades, filmmaker Danae Elon makes the
decision to move with her husband and children to Jerusalem. This
complicated choice goes against the last wishes of Danae’s father,
acclaimed author Amos Elon, who made her promise that she would
not return to the city in which he had so painfully lost faith. Elon
intimately narrates her experiences, bravely exposing the complexities
of life in Jerusalem and Israel, and one family’s challenge to find their
“home.”

Thursday, June 23, 7 pm
The Kindergarten Teacher, Israel/France, 2014
dir. Nadav Lapid (119 mins., Drama, DCP)
Nira, a kindergarten teacher in Tel Aviv, is convinced that her fiveyear-
old student is a modern day poetry prodigy. Hypnotized by the
boy’s recitations of his work, she begins to write the poems down. A
struggling poet herself, Nira comes to believe that only she can help
the boy with his remarkable gift, but as her efforts escalate, so do the
murky complexities surrounding her true motivations.

Saturday, June 25, 8 pm
Fever at Dawn, Hungary, 2015
dir. Péter Gárdos (110 mins., Romance/Drama, DCP)
Miklos is a twenty-five-year-old Hungarian who has survived the
camps and has been brought to Sweden to convalesce. His doctor has
just given him a death sentence—his lungs are filled with fluid and in
six months he will be gone. But Miklos didn’t survive the war only to
drown from within, so he declares war on his own fate. He acquires the
names of the 117 Hungarian women also recovering in Sweden, and
he writes a letter to each of them in his beautiful cursive hand. One of
these women, he is sure, will become his wife.

Sunday, June 26, 4:30 pm
The Art Dealer, France, 2014
dir. François Margolin (95 mins., Drama/Thriller, DCP)
When her art dealer husband brings home a ravishing 18th century
painting, Esther, a journalist, thinks nothing of it until her father is
suddenly overcome with emotion at the sight of it. When he refuses
to explain his visceral reaction, she becomes intent on solving the
mystery of a treasure presumably stolen from her Jewish family by
the Nazis. Searching for the truth in a past shrouded in mystery, she
uncovers a story that has been carefully buried for decades by those
closest to her, and in doing so learns that some family secrets are best
kept hidden.

Sunday, June 26, 7 pm
Demon, Poland/Israel, 2015
dir. Marcin Wrona (94 mins., Thriller, DCP)
Peter has just arrived from England to marry his beautiful fiancée,
Zaneta, at her family’s country house in rural Poland. While inspecting
the grounds, Peter finds skeletal human remains buried on the
property. Haunted by his discovery, Peter’s mental state slowly starts
to unravel while the joyous and drunken traditional Polish wedding
goes on around him. With nods to Stanley Kubrick’s The Shining,
Demon is a chilling, clever take on the Jewish legend of the dybbuk
and a thrillingly kinetic cinematic experience.

Monday, June 27, 7 pm
Norman Lear: Just Another Version of You
US, 2016
dir. Heidi Ewing, Rachael Grady
(92 mins., Documentary, DCP)
Norman Lear is arguably the most influential creator, writer, and
producer in the history of television. His legendary 1970s TV shows
All in the Family, Good Times, The Jeffersons, and Maude used comedy
and unforgettable characters to shift the national consciousness
about class, race, faith, and feminism. Rachel Grady and Heidi Ewing’s
film offers a rich and layered portrait of the extraordinary 93-year-old
Mr. Lear that reveals a man whose extraordinary social and cultural
contributions emerged from both his personal story and an ongoing
dialogue with the world.

Tuesday, June 28, 7 pm
Vita Activa: The Spirit of Hannah Arendt
Israel/Canada, 2016
dir. Ada Ushpiz (125 mins., Documentary, DCP)
The German-Jewish philosopher Hannah Arendt caused an uproar in
the 1960s by coining the subversive concept of the “Banality of Evil”
when referring to the trial of Holocaust organizer Adolph Eichmann.
Her private life was no less controversial thanks to an early love
affair with renowned Nazi supporter Martin Heidegger. Ushpiz’s
thought-provoking film offers an intimate portrait exploring the whole
of Arendt’s life, traveling to places where she lived and wrote about the
open wounds of modern times and the nature of evil, totalitarianism,
ideologies, and the perils faced by refugees.

Wednesday, June 29, 8 pm
Once in a Lifetime, France, 2014
dir. Marie-Castille Mention-Schaar
(105 mins., Drama, DCP)
A dedicated history teacher at a French high school, Anne is
determined to give the best education she can to her underprivileged
inner-city pupils. Overcoming their apathy, however, proves to be
more difficult than expected. Frustrated but undaunted, Anne tests
her multicultural classroom with a unique assignment: a national
competition on the theme of child victims of the Nazi concentration
camps. The project is initially met with extreme resistance, until a
face-to-face encounter with a Holocaust survivor dramatically changes
the students’ attitudes and perspectives on the world.