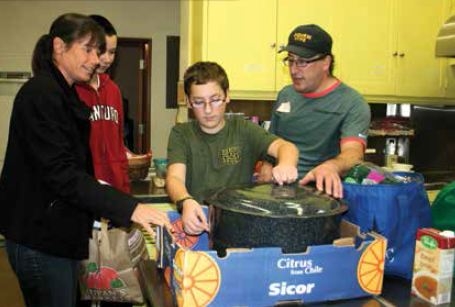 Solomon Olshin’s bar mitzvah project started in the kitchen almost a year ago. “SoupSac is something my dad and I made up,” Solomon explains. His personal project has turned into a series of Congregation Beth Israel events, beginning with serving more than 300 meals on Martin Luther King Day 2013. While he will become a bar mitzvah over the MLK weekend with a havdallah service Jan. 18, his project lives on. On MLK Day, Jan. 20, CBI will again produce SoupSac, with more to come.

Solomon and a friend got together Nov. 16 to make soup for one recent SoupSac. They cooked all evening, turning out a sublime mini-meatball recipe complete with six pounds of beef and veal, vegetables and pasta. Nutritious and delicious, the soup would go straight to homeless Portlanders the next day. On Nov. 17 he and his friend met up with other soup making teams and volunteers at Beth Israel to sort, chop and package. Peanut butter sandwich makers worked assembly-line style among cartons of groceries, while kitchen helpers took turns stirring steaming cauldrons on the stove.

“Some people say giving people on the streets food is helping them stay on the streets, but I think it’s helping them want to work harder and sustaining them while they try to find something,” Solomon says. A seventh-grader at Arbor School of Arts and Sciences, he loves computer programming and hopes to become an engineer.

“There are lots of stories,” Solomon says. “The second time we did this, I took my three best friends from Hebrew school. My mother drove us around, and we gave everyone soup. They said, ‘G-d bless you; thank you so much.’ Last time, it was pouring and nobody was on the street, so we finally took the soup to a shelter. …. We also had a trunk full of bread donated by Ken’s Artisan Bakery along with pastries. They donate all their day-old bread.”

Solomon considers cooking an art. “It’s fun because you learn a lot about cooking and how your friends cook,” he says. “It’s a great leadership thing. You learn management skills. We interact and see the living conditions the people are in and try to help them. Everyone who comes always says, ‘I want to do this again.’ ” Solomon’s parents, Andy Olshin and Dr. Rebecca Mischel, share their son’s enthusiasm. They helped him write the application for the Oregon Jewish Community Youth Foundation grant that will partially fund three congregation-wide SoupSacs next year. “In my mind, it began in 1969 when my mom and dad started a community counseling center in New York,” Andy Olshin says. “I remember walking around with a can collecting for the center. We’re passing on social action with this project. One of the first things we made was Grandma Sophie’s chicken soup.”

Rabbi Rachel Joseph was among the team preparing November’s SoupSac. She praised the synagogue’s education program where tikkun olam is vital to the curriculum along with Torah study, Hebrew, Jewish history and ethics. “This is what we wish for all our kids, to unite their mitzvah project with the community,” she says. “It’s wonderful to see all these people join together to help feed Portlanders, and it started with a 12-yearold’s idea.”