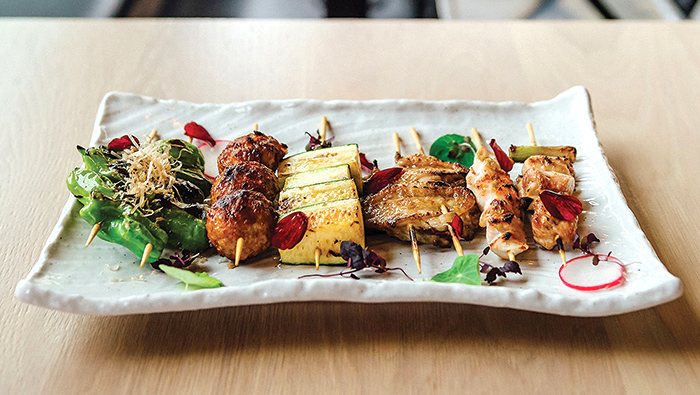 The ramen craze has taken over Portland and indeed much of the country. But until now, one style of ramen has predominated. Afuri’s Taichi Ishizuki explains that tonkotsu ramen, first popularized at Ippudo New York, has since become the default in this country. However, this creamy, cloudy, pork-based style is not what is offered at Afuri. Says Taichi, “Generally, there are two ways to make the ramen broth. One is called chintan; the other one is called paitan, or tonkotsu-style. Chintan, which is what we do, means clear broth. We take out the fat component carefully; our broth has different kinds of chicken, fish, veggies. It’s more complex, delicate and smooth, and healthier.” Afuri offers thin, whole wheat noodles in a light broth accented with Japanese citrus and salt, or soy sauce, or roasted green tea and truffle oil. Since the broths are not pork-based, diners can enjoy chicken-based or even vegan noodle soups. The ramen noodles, which are thin like soba, contain no egg.

While Afuri has 10 locations in Japan, Portland is its first location outside of Japan. One reason our city was chosen was for its water. Taichi explains, “Portland’s water has between 17 and 25 parts per million (of dissolved solids), which is considered super-soft. Hard water, like the water in say, Los Angeles, has lots of other components – manganese, magnesium, calcium.” These components affect the all-important broth.

Taichi remarks, “In Japan, we only focus on ramen, not other stuff, but here we have brought homemade tofu and skewers, which use the beautiful ingredients in Portland. We grill with charcoal. We have two teams in the kitchen – one for ramen and one for everything else. That makes us able to specialize in other things.”

Diners are encouraged to arrive as early as possible, as Afuri does not take reservations. However, the restaurant is quite large, with seating in the dining room and bar.