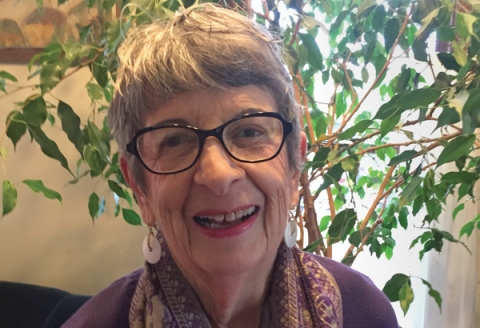 Fifteen years ago Millie Estrin started a one-woman campaign to eliminate the use of plastic foam cups at onegs and other gatherings at Temple Beth Sholom in Salem.

“The overwhelming evidence I saw of global warming compelled me to try and bring the congregation to sustainability,” says Millie. “I felt it was my responsibility as a Jew to guard the Earth.”

After nearly a dozen years of Millie’s “very verbal” push for sustainability, she says other members stepped up to help. The resulting sustainability committee helped the congregation earn an EarthWISE certification for eco-friendly practices. EarthWISE is a free business environmental assistance program of Marion County that helps businesses recycle, save energy, reduce waste and more. This past year the committee also launched a community garden that donated nearly 200 pounds of produce to Marion-Polk Food Share, which delivers to local food pantries, as well as directly to the food pantries.

“I do want to emphasize my great committee,” says Millie. “They are all way smarter than me and really keep me motivated and moving forward. Nathaniel (Darnell) and Lee (Cowan) have done wonderful work on updating our lighting in the building; Burt (Bogart) is the “detail” guy who makes sure that all the i’s are dotted and the t’s crossed, and Larry (Konick) has done yeoman work on the garden. Agnes (Opgenorth) also put in tons of work on establishing the garden last summer. Judith (Havas), for her part, has always supported any decisions the committee has made, such as getting rid of plastic cutlery, etc. None of the things we’ve accomplished could be possible without the work and dedication of this wonderful group of folks.”

And the committee has accomplished a lot. The synagogue has multiple recycling stations to collect paper, plastic, cardboard and fluorescent lightbulbs. The committee purchased reusable and compostable dishware and utensils. Food waste from the events is composted (Millie brought worms from her home compost bin to establish a composting station at the temple).

As lightbulbs burn out, they are replaced with new energy-efficient bulbs. The kitchen lights turn on by motion sensors to further conserve energy. A new water heater eliminates the need to run water for a long period to get hot water.

The synagogue is landscaped with native plants that rarely require watering.

While Beth Sholom congregants had helped in other community gardens in past years, Larry Konick says that in 2013 he suggested to his fellow members of the sustainability committee that the congregation start its own community garden. After the temple board approved the project, he says his role was “to do whatever was needed to make it a viable garden.” He applied for and received a $700 grant from South Salem Connect to develop the garden and then, “I helped build (construct beds, install water and hose bibs, construct fences, maintenance, etc.).”

He says last year they grew about 20 varieties of vegetables, but this year they intend to concentrate on fewer crops such as potatoes, tomatillos, onions, beets, carrots and peppers. “This will decrease the maintenance,” Larry says. “We are also working on installing a drip irrigation system.”

Millie says the committee is also exploring the creation of a “rain garden to capture water, so it doesn’t run onto our parking lot where it picks up oil and contaminants.”

A master gardener for nearly 30 years and a master recycler since 2004, Millie says she hasn’t done much work in the congregation’s community garden. “Due to my age, my garden takes most of my energy,” says the nonagenarian. However, she notes her work in her home garden did net her first prize at the Oregon State Fair for the baby blue Hubbard squash she grew last summer.

Somehow a blue ribbon seems a fitting prize for this grand dame of Salem sustainability.