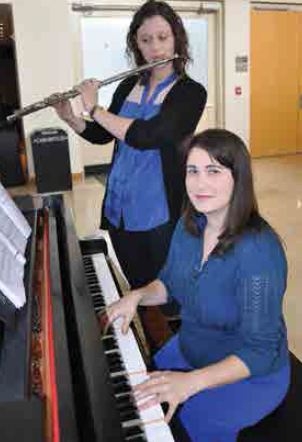 A dynamic duo is taking Portland’s classical music scene by storm. Called 106 Keys, the group is the brainchild of pianist/composer Beth Karp and flutist Amalia Blumberg. Since moving to Portland from the East Coast, the accomplished musicians have been performing a wide-ranging repertoire that features the works of Jewish composers. The duo’s creative programs incorporate works like the “Sonata for Flute and Piano” by Erwin Schulhoff, a Czech composer who perished in the Holocaust. Other works draw from folk music, pieces by Philip Glass and Ernest Bloch, and the oeuvre of local composers like Reed College’s David Schiff. Says Karp of Schiff: “We’ve decided to take on his ‘After Hours.’ This piece was written as five pieces that could be performed either as encores or together as a suite. And although they’re very tightly structured, they also sound jazzy and improvisatory … just a lot of fun.”

In addition to being a performer, Karp is a skilled composer who finds inspiration in Jewish music. She explains: “I was raised in a fairly religious household. I was singing at shul, and I went to a Jewish school for 12 years, learning contemporary Jewish and Israeli music as well as songs from the prayer service.” Karp decided to pursue music as her vocation and received a bachelor of music in piano and composition from Cornell University and a master of music in composition from the Longy School of Music. After graduating in 2009, rather than return to her hometown of Potomac, MD, Karp chose to move to Portland. “The Pacific Northwest looked really appealing,” she says. “I moved here in part so I could get outside more, especially to go kayaking, but I find that I just do music all the time. Portland’s given me a lot of great opportunities.”

In addition to performing with 106 Keys and teaching at Portland Community College, Karp is writing music for silent films. Her most recent work is a solo piano score for “The Golem,” a
1920 German Expressionist film. Says Karp, “The score, which was a labor of love, draws on classical, Renaissance, minimalist, pop and traditional Jewish influences. The film presents a strange, beautiful, problematic version of the legend.” In Karp’s work, one can hear the late Romantic harmonies favored by the composer as well as the repeated arpeggios of Philip Glass. To Karp, modern classical music often lacks the rhythmic propulsion of folk music; she enjoys focusing on this element. Future works by Karp include a score for larger ensemble for hand-colored film shorts from the early 1900s and a musical about New York politician Anthony Weiner.

Blumberg is a graduate of the flute programs of UMass Amherst and the Jerusalem Academy of Music and Dance in Israel. She is the recipient of a Fulbright grant that funded her involvement in a “peace through music” initiative between Israelis and Arabs. The flutist performed with the Jewish Arab Orchestra, which presented a blend of Eastern and Western music. Blumberg says that her time in Israel inspired her to find and play music by Israeli and Jewish composers. She explains, “I love finding hints of folk melodies in the music from the country of origin or from the cultural background of the composer.”

The young flutist met Karp after a performance of “The Golem,” and 106 Keys was born. Blumberg teaches private flute lessons in Portland and performs as a member of Portland Chamber Music. She also teaches Hebrew to kindergarteners at Portland Jewish Academy.

106 Keys has an exciting schedule of performances coming up, including a concert on Dec. 21 at the Portland Piano Company (711 SW 14th Ave., 503-775- 2480). This performance will feature a program of music by David Schiff, Philip Glass and Darius Milhaud among other Jewish composers. Other upcoming concerts include a Dec. 22 show at the Rose Schnitzer Manor and an “After Hours Candlelit Concert,” which is part of the March Music Moderne: Listening to the Here of the Now series. This unique performance, which features the aforementioned Schiff piece, will take place by candlelight at 11 pm on March 14. (Karp bills it as “21st century music, 13th century lighting.”)

Learn more about Beth Karp and 106 Keys at betharielkarp.com/106keys.