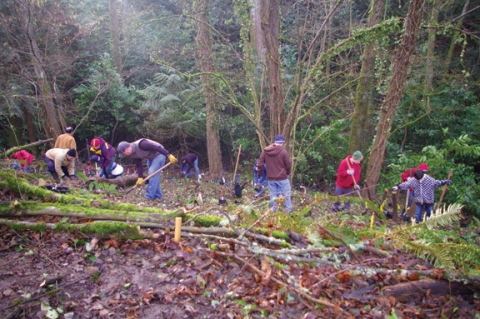 Each month, Oregon Jewish Life will ask a group of four or five rabbis, cantors and/or members of the community a question relevant to the season or a theme in that issue.
Our first issue falls in the same month as Tu B’Shevat, the New Year for the Trees, which is often called the Jewish Earth Day. So, for the first Traditions column, we asked the rabbis of the five oldest congregations in Portland to reflect on Judaism and the environment.

One of my all-time favorite midrashim deals with the human mandate for environmental responsibility:
“When the Holy One, blessed be G-d, created the first man, G-d took him and led him round all the trees of the Garden of Eden, and said to him, ‘Behold My works, how beautiful and commendable they are! All that I have created, for your sake I created it. Pay heed that you do not corrupt and destroy My universe; for if you corrupt it there is no one to repair it after you.’” (Ecclesiastes Rabbah VII:20)
The rabbis here are obviously dealing with the problem presented early in Genesis (1:28) where the first man is told to “subdue” the earth and have “dominion” over the animals. Demonstrating discomfort with absolute and wanton rule, the rabbinic imagination shifted the relationship between humanity and nature from ownership to stewardship. After all: “The earth is the Lord’s, and all that fills it; the world, and those who dwell in it.” (Psalms 24:1; see also Exodus 9:29). This is G-d’s world. We have to take care of it.
Human beings, we are taught, have a Divinely mandated responsibility towards the world we have inherited. For Jews, this is enacted through practical legislation, under the rubric of ba’al taschit – do not be wasteful or wantonly destructive. (Interestingly, this law even extends to the overuse of oil – used for lighting! See Talmud Shabbat 67b).
In this era of Climate Change – where the scientific consensus clearly predicts mass extinctions of species and wholesale displacement of habitable regions, the Jewish value of human stewardship should provide a clear mandate: not only Conservation (ba’al tashchit), but active engagement to take care of G-d’s world and all who are in it.

by Rabbi Daniel Isaak
Congregation Neveh Shalom
God spoke to Adam: “All that I have created, I created for you. Do not corrupt it and desolate My world; for if you corrupt it, there is no one to set it right after you.” (Ecclesiates Rabbah). Underlying Jewish concern for ecology, the Torah teaches that God placed us on the earth both “to work it and preserve it” (Genesis 2:15). Noah, we recall, was charged by God to protect all living things as he gathered them in the ark. And from Abraham’s vigorous argumentation to save Sodom and Gomorrah, we are charged to be actively engaged.
At Neveh Shalom we are proud of the plaque from the U.S. Green Building Council that certifies our construction completed two years ago as meeting Leadership in Energy and Environment Design expectations, granting us Silver status. LEED is the nationally accepted benchmark for high performance green buildings. In planning we were determined that our efforts exemplify and model the highest in sustainability concerns. Visitors to our campus are greeted by parking spaces designated for hybrid cars and carpools and spaces to lock up bicycles. Less obvious are the flow-through planters that collect and filter runoff water and the highest efficiency heating and air-conditioning system.
Our Shomrei Teva volunteers remove non-native species and enlist our children to plant our vegetable garden. From school to kitchen to office, we recycle and compost.
We only have one earth and it is incumbent upon us all to do whatever we can to preserve that with which God has blessed us.

by Rabbi Arthur Zuckerman
Congregation Shaarie Torah
Are you aware that Israel plants more trees than it cuts down on a yearly basis? We, the Jewish people, have dedicated ourselves to restoring the Land of Israel through toil and sweat. Leviticus Rabbah 208 states: “The Holy One, Blessed be He, said to Israel, ‘Although you find it filled with all manner of goodness, do not say we shall sit idly by and not plant, rather just as others planted for you, so shall you plant for your children.’”
Pollution, as we all know, is not a good thing. In my view, pollution refers to many things that confront all of us daily – from keeping good thoughts in our minds about others and extending to our environment. If you have a piece of litter, put it in the right disposal container. If you are walking your dog, clean up after him. Keep your lawns and gardens tidy, help with a community whitewash graffiti day, opt for electronic notifications instead of paper.
On the topic of animal agriculture, I speak from years of experience as a kibbutznik and vegetarian. The amount of carbon gases produced in large animal compounds has a negative impact on the ozone layer and our air, soil and water. Have you ever wondered why Adam and Eve were never told to eat animals, but only of the trees of the Garden of Eden? The first reference of eating of animal “flesh” is after the Great Flood and the story of Noah.
Today through the development of science, we are able to protect our environment, eat healthy and be caretakers of God’s earth.

by Rabbi Kenneth Brodkin
Congregation Kesser Israel
According to Jewish belief, the earth and all of physical creation emanates from the Almighty Creator of the universe. Thus the earth is an expression of G-d’s majesty.
There are two biblical commands which shed light on our relationship to the earth.
First, G-d commanded Adam to “work and guard” the Garden of Eden where man was placed. Given the intrinsic holiness and divine purpose of the world, we must take care to guard the earth using it for its purpose.
Second, there is the biblical command against needlessly cutting down fruit trees. When a Jewish army lays siege to another city, they may not cut down the surrounding fruit trees without cause. This is a prohibition against unnecessary destruction. The medieval work on the commandments, Sefer HaChinuch, writes that we glean from this prohibition that a Tzaddik is one who desists from wasting or belittling any matter, great or small.
Aside from the command against needless destruction, the Jewish soul sees in the earth’s beauty a profound opportunity to know G-d. Indeed, King David rejoiced in reflecting on the beauty of creation declaring, “how great are your works, HaShem, all of them You made in wisdom, the earth is filled with your possession!” (Psalm 104).

by Rabbi Michael Kaplan
Congregation Ahavath Achim
In the morning prayers we proclaim “mah rabu ma’asecha Hashem” (How wondrous are Your creations, Hashem). To begin our day, a Jew looks out to the world to see God’s hand in everything, from the snowcapped mountains to the blades of grass on which we step on our way to the car.
The Talmud relates that one should only pray in a house that has windows. The commentaries explain that if one is having difficulty with his or her concentration while praying, one should look out these windows – to the world – in order to regain the sense of before Whom we are standing.
It is through the meticulous attention to even the smallest detail that we are able to sense the Almighty’s presence, stand in awe of it, and be thankful for the wonderful world with which we have been blessed.