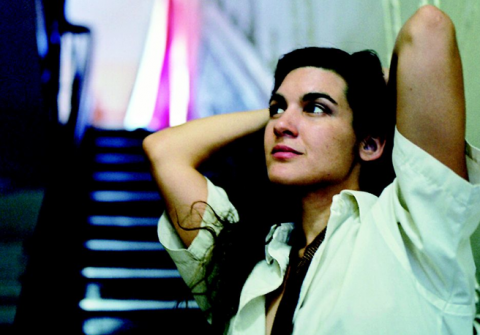 A lot of things have changed for Alicia Jo Rabins in the past two years. The 30-something musician/poet/songwriter/composer/teacher became a mom, she and husband Aaron Hartman moved to Portland from New York City, and Rabins premiered her one-woman show, “A Kaddish for Bernie Madoff,” just days after Hurricane Sandy struck the east coast. Rabins doesn’t seem fazed, though; change is an integral part of her world. “As an artist and someone who’s interested in spiritual practice, I believe that growth and change are constants in life.”

Rabins is a Portland native, although she’s spent the last decade living in the Bushwick neighborhood of Brooklyn. During that time she completed her master’s degree in Jewish Women’s Studies at the Jewish Theological Seminary, played violin with the klezmer-punk band Golem and released two CDs of her own on the JDub label: “Girls In Trouble” (2009), an art-pop song cycle in the voices of obscure women from Torah and Midrash, and “Half You Half Me” (2011), a second album of songs about Biblical women.

According to conventional wisdom, performing artists need to live in major cultural centers like New York, where there are more opportunities to hone their craft. By making Portland her home, Rabins has chosen to buck that trend, although, as she explains, “We have a moderately nomadic lifestyle; moving here is more about where our home base is, rather than where everything in our life will happen.”

These days, Rabins spends much of her time parenting her 10-month-old daughter, Sylvie, and working on two books of poems. “In New York, the hustle to survive financially was beginning to negatively affect my artistic life,” says Rabins. “As a poet, there’s a certain amount of time and space I need to go deep with my work. I love New York, but especially once we had the baby, I felt like all my energy was taken up with survival and family responsibilities.” Rabins feels Portland’s reputation as a place where artists have time and space to pursue their creative goals is well deserved. “Being here has allowed me to work on my poems in a way I wasn’t able to do in my adrenalized, hustling existence in New York.”

In an interview she gave to New York’s Jewish Week last May, Rabins announced her plans to wind up “Girls In Trouble” with a third and final album, which she’s currently composing. When I asked if she ran out of women to write about, Rabins laughs. “I always imagined GIT as a triptych – three albums with 10 songs in each album. I let the work tell me what it needs, so it’s pos- sible that I might want to do more with GIT after this album, especially if I get a commission.” Rabins believes the stories of women in the Tanach are not studied as much as they should be. “I’m pretty passionate about my work as a Jewish educator. I’ve been thinking about taking the GIT songs I’ve written and cre- ating a curriculum around them. I’ve often been asked by Jewish educators – particularly those who work with teens – for such a curriculum, like the one developed for Rosh Hodesh – ‘It’s a Girl Thing.’” Rabins also wants to design a GIT course outline for adults, which could be adapted for Melton adult education programs or for individual online study.

Last November, Rabins premiered her one-woman show, “A Kaddish for Bernie Madoff,” which weaves Rabins’ yearlong obsession with the Bernie Madoff scandal into a larger tapestry that investigates the intersection of mysticism and finance, the inevitability of cycles and the true meaning of wealth. “There was a lot of risk and vulnerability in creating and performing the piece,” says Rabins. “It was very new for me. I was a character named Alicia in the show, a fictionalized version of myself. Originally I thought it would be a rock opera, but I didn’t want to just tell Madoff ’s story, because anyone can read that in the paper. As I so very often find, when you set out on a creative journey, the result is usually not what you expect, and it’s usually deeper and more challenging than your original concept.” Rabins will be performing the show in Washington, DC, next month, and hopes to bring it to Portland in 2014.

Meanwhile, Rabins is enjoying Portland’s relaxed, kid-friendly lifestyle. “I’m a big bike commuter; it’s safer to ride here, and when she’s a little older I can put Sylvie on the back of my bike,” she says. “In Brooklyn, we used to live in an area that didn’t have a lot of good produce. Now we live near a New Seasons, and I love to cook, so being able to walk with Sylvie to New Seasons and buy quality food is great.”
“In many ways, I have the community I need built in already, because Aaron lived here for a long time and made so many friends here before we moved,” Rabins adds. “Many of them have kids and they’ve been really welcoming to us. I’m really appreciative of all the creative moms and dads here, and of course I love the weather.”