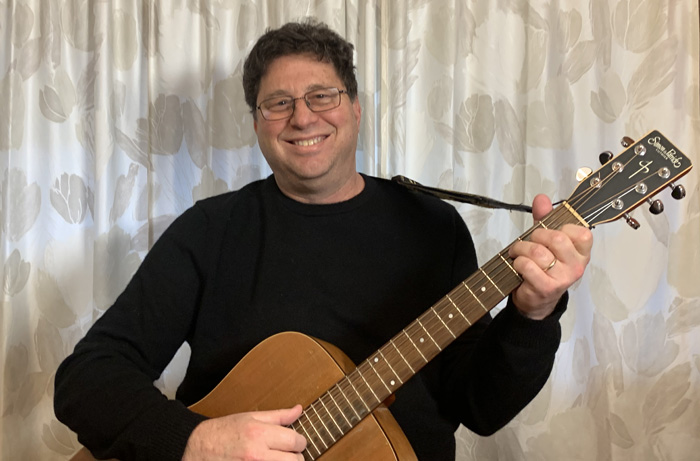 Mark Sherman has combined his love of Jewishness and the Torah with his songwriting ability to create The Musical Midrash Project.

What started initially as a personal meditation project left unfinished years earlier, Mark revisited the melodies he began during the High Holidays in 2018. The result is 54 songs, some just in demo form, that correspond with the weekly Torah portion or parashah.

“I was looking for a lyrical, kind of loveliness in the language because I always loved it, and I know that many other people find it intimidating,” says Mark. “So I thought, ‘I’m going to look for something that sounds beautiful, something lyrical. And I’m going to see if there’s a musical idea that comes to me around that text.”

Mark was very steeped in music as a child. “I heard classical music. I heard a lot of old folk music as well as new folk music of the time.” Mark enjoyed the music of great singer-songwriters like Paul Simon and Cat Stevens. He also realized the importance of Jewish music, and even when he didn’t feel like he understood the Hebrew very well, he understood the emotion of the song.

“The way it brings people together is also very powerful for me,” says Mark. “I have a very strong musical orientation and have enjoyed writing songs.” He has written and recorded children’s songs for Portland Jewish Academy in the past.

Mark has also been a regular leader of services at Cedar Sinai Park for more than 20 years and is the co-founder of the downstairs minyan at Congregation Neveh Shalom.

His songs are not an English translation, but an interpretation using the rhythm of the Hebrew words as a guide for the melody.

“There’s this powerful, beautiful text that touches every kind of emotion, feelings and transformation points,” says Mark. “All of those relationships are there in the text, and in the music, I look for that emotional connection, along with the story. Not just ‘What is the story? But how is it trying to move us?’”

At the end of the Book of Genesis, he shared his songs with a small gathering, where he received enough encouragement to keep going. Still, he wanted to try out these songs on an audience as they were developing week by week, as he had initially experienced the process, instead of just sharing them in full cycles.

The Musical Midrash Project has also become a hands-on family affair with support from Mark’s wife, Gail, and their children Ilana, Ben, Ayala and Nomi. In fact, Ilana created the logo and Ayala designed the website.

“Over the course of this past year, this little experiment has surprised me with how strong it has become,” says Mark. “People have appreciated the songs, and it’s developed a really loyal following.”

When the pandemic began, and Mark couldn’t bring people together physically, he started creating Zoom events. “It’s showing me that the songs do have an impact for people – that it can do for others what it did for me,” he says. “Creating an emotional, personal connection to the words that is different from how you experience it any other way.”

So he started a weekly live session. Every Sunday morning at 8 am, and every Monday evening at 6 pm, he’ll do the same basic session. “One for morning people and one for evening people,” he says.

“For some people become it has become a ritual part of their week. Their connection to Judaism during this period when everything’s shut down,” says Mark. “Their love for the songs has really made a difference for me and how I experience them myself.”

For more information on the Musical Midrash Project, visit musicalmidrash.com.