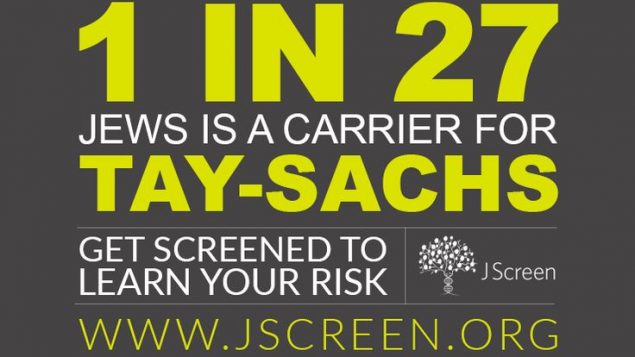 September is Tay-Sachs Awareness Month, an urgent reminder for people to get tested for genetic diseases so they can make informed decisions about family planning. Expanded screening panels now enable for testing of more than 200 diseases, a significant development from a generation ago.

“The genetic screening offered today is fast, easy, and comprehensive,” says Karen Grinzaid of JScreen, which offers tests for genetic diseases through DNA saliva (“spit”) that can be collected at home and then sent to a lab. “While Tay-Sachs certainly is one of the more well-known diseases among Ashkenazi Jews, we test for over 200 diseases that affect people of all backgrounds. Young adults especially need to know if they are carriers and if their future children might be at risk. ”

One in 30 Ashkenazi Jews are carriers of Tay-Sachs, and one in 300 people of the general population are carriers. While there is no cure for Tay-Sachs, genetic testing can determine who is a carrier and whether their child will be at risk for this and other diseases. For the small percentage of couples who are at risk, there are many options to help them have healthy children.

One in three Jews is a carrier for one of the Jewish genetic diseases.

Since the 1970s, the incidents of babies being born with Tay-Sachs has fallen by more than 90% among Jews because of scientific advances and increased screening in the Jewish community.

The genetic disorder caused by the absence of beta-hexosaminidase (HexA), causes cells to become damaged and results in progressive neurological disorders. When both parents are carriers, each child has a 25% of having the disease.

“When my oldest son Evan was diagnosed with Tay-Sachs Disease at the age of 13 months my life changed forever” says Shari Ungerleider of Wayne, NJ, who is Project Coordinator at the Jewish Genetic Disease Consortium and a National Tay-Sachs and Allied Diseases Association past president and current board member. “My husband and I had to deal with the fact that we would lose our precious son at a very early age.  Nothing prepares you for the loss of a child.  As a result of Evan’s illness and passing I have been involved in education about preconception carrier screening for the Jewish genetic diseases.  Screening is vital in family planning.”

Currently, 80% of babies with genetic diseases are born to parents with no known family history of that disease.

“When a couple is unaware of diseases they carry, the results can be devastating” adds Hillary Kener, assistant director of national outreach for JScreen. “Any young adult planning to start a family or grow their family in the future should get screened. The history of Tay-Sachs in this country shows how genetic testing can positively influence people’s lives and the health of their children ”

JScreen is a nonprofit community-based public health initiative headquartered at Emory University School of Medicine dedicated to preventing Jewish genetic diseases. The JScreen “spit kit” is easily ordered online, used at home and then mailed in so that clinical geneticists can test the DNA. If a person or couple’s risk is elevated, certified genetic counselor swill privately address their results, options and resources. Cutting-edge technology enables geneticists to look closely at people’s genetic makeup to identify their risk for more than 200 different diseases, including those that are predominant in the Jewish community. Traditionally, Tay Sachs carrier screening required blood enzyme testing, but today’s sequencing method allows highly accurate testing to be performed on saliva.

The Senate voted unanimously in July of 2008 to name September National Tay-Sach’s Awareness Month. The resolution was introduced by Senator Sherrod Brown of Ohio and co-sponsored by Senator Evan Bayh of Indiana.