Diane Fredgant was attending a drumming circle at an artist’s studio in Albuquerque, NM, more than 25 years ago when she admired the woman’s painted silk artwork and asked her to create a wall hanging for her. When the artist told her that she thought she could make her own wall hanging, Diane laughed. At the time, she was a sculptor of stone and wood and had never even entertained becoming a painter.

“But then I painted my first piece, and I just fell in love. It was amazing,” remembers Diane.

The first silk item she ever painted was a scarf for an aunt’s birthday, and the second was the wall hanging.

“I just fell in love with it and bought a bunch of supplies and a steamer,” says Diane. She received minimal instruction from the artist but learned a lot of it through trial and error. “She taught me how to process the silk and what part of the process to be careful with, and then you test things out. I’m still testing out new processes, new ways of working the material. It’s always changing.”

Diane does a lot of custom tallit designs for clients. “I work with the bar/bat mitzvah person, or an adult, and I talk to them about where they find their spirituality because a tallit is kind of a cave if you will,” says Diane. “A cave where you surround yourself, and you get in touch with the source. So it’s like a personal prayer space.”

As she talks to her client, she starts to visualize pictures in her head, and she’ll begin a sketch. Diane will then turn those sketches into a life-size drawing and send photos to the client for approval. Once she receives approval, and they have decided on colors, she begins the piece.

Every tallit she creates starts with a large piece of pure white silk that is stretched using special pieces of bamboo so that the silk can “float” in order not to have any creases on the finished product.

Diane then places her drawing under the silk and uses a unique water-based material called gutta that acts as a resist to outline the design. 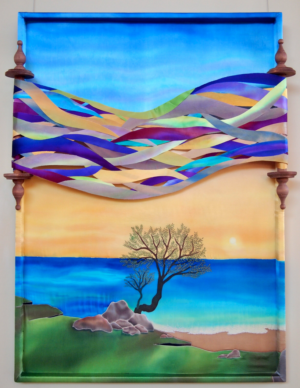 “I’ll draw my design on and then let it dry for 24 hours,” says Diane. “Then I check it and make sure I don’t have any holes in the gutta line because if there are holes in that line when you put the dye in it’ll just seep into the next area, and sometimes that will ruin the piece.”

The next step is to lay out all the colors. She applies the color with calligraphy brushes that she obtained on a trip to China. Diane jokes that she is never that precise when she is mixing colors. “I will never be able to recreate something exactly; everything is one of a kind from me – there is no formula,” she says. “I just breathe and let go and go for it. You have to work fast because if an area of the dye dries as you’re going along, it creates these lines. I work fast and let things flow together. It’s a form of ‘controlled chaos,’ because it isn’t something you can completely control – it’s a one–shot deal.”

After the piece is painted, there is a two-day drying process, and then Diane steams it for 2 ½ hours to set the color. She then hand washes the piece to ensure that all the excess dye is removed.

The next step is to sew the painted silk into a tallit. Diane uses high-end cotton to line the piece.

“I go along the bolts of quilters cotton, and I just find that perfect color match; it’s usually just one,” says Diane. “If I don’t find it at my main store, then I go to another, and then another. I have three different stores I go to, and I know people there. They see me coming and say, ‘What do you have for us today?’”

And if the painting process isn’t stressful enough, Diane has to be careful when cutting the silk before sewing. “I have cut the silk in the wrong place by accident at the very end,” she says. “I had that happen some years ago, and I could fix it. This next time was recent, and I couldn’t – I had to start over. I cried on that one.”

Diane also hand makes bags for each tallit, using the matching lining material and one-of-a-kind buttons. She puts careful detail into every step of the process because she wants the finished product to be of the highest quality for its owner.

She has also been asked to “hide” things in the tallit, which has special meaning for the wearer.

“One person wanted some of her baby blanket in the tallit. So I hid it between the atarah (collar) and the lining so that nobody could see it, but she knew it was there,” says Diane. “Someone was into music, so I put little headphones on one of the biblical characters in the scene. I’ve also written the names of someone’s ancestors into the water of a river.”

Diane has lived in Portland for 19 years and was one of ORA Northwest Jewish Artists group’s original members and is now its president. “I was pretty new at the time to Portland, and they invited me. I didn’t know anybody in the group, and now we’re all really close,” she says.

She is currently working with other artists on a project called the “Modern Mishkan.” Ten years ago, Diane had the vision to recreate this portable holy space mentioned in the Torah. The large art installation is covered with all 613 mitzvot in English and Hebrew and serves as “a prayer space, an offering and a representation of the connection between art and faith that has driven my career.”

Although COVID-19 put the project on pause, it was previously on display at Congregation Neveh Shalom, and it also appeared at the 2019 NewCAJE Conference in Portland.

“It’s a work in process, and every time I put it up somewhere there’s something new that gets revealed,” says Diane. The most recent thing she added was a copper bowl because copper was a common element used in the mishkan of old. “People put prayers into it, and then I burned them so that the smoke went up to God, and then I buried the ashes.”

She recently received a grant for the project and intends to rebuild the internal structure with aluminum to be lighter and more portable. She has a goal for when the pandemic is over. “What I want to do is drive down the corridor of I-5 and set up at temples or shuls along the way and do a weekend Shabbaton inside the Modern Mishkan.”

To find out more about the Modern Mishkan, or to view Diane’s art, visit silksbydiane.org. 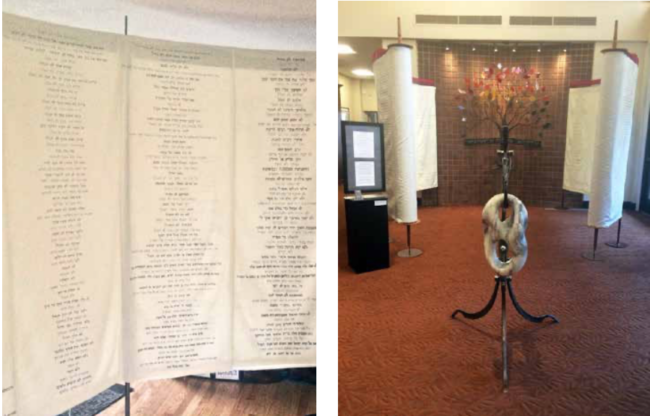