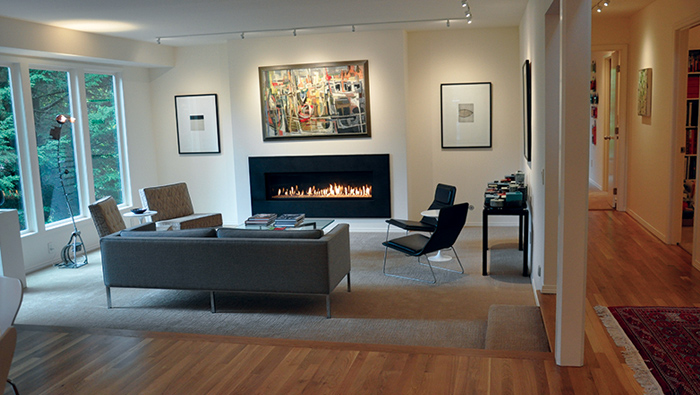 Balancing the need for space for their daughter and grandson and an extensive art collection, Ted Nelson and Curt Shaffstall initially decided to remodel their home.

Then they saw a secluded house five minutes from downtown that would perfectly accommodate their family and had the potential to be a showcase for their paintings, prints and one of the largest collections of mid-century Dutch ceramics in the world.

Ted and Curt had accumulated an extensive collection of paintings and prints before they adopted Keyaira and Quanie when they were 7 and 8. In recent years Curt has focused on collecting ceramics from the Netherlands.Their son, now 26, is a manager at McMenamins Edgefield.

Built into a hill, the ground level on the downhill side was ideal for 25-year-old Keyaira and her 2-year-old son Izaakh, with bedrooms, family room and a small kitchen. It is also an easy commute to Izaakh’s preschool at Congregation Beth Israel, where Ted serves as the congregation’s president. The main level and upstairs master suite was where the home needed work.

Interior designer and contractor Robert Trotman, who had been working with the couple on a remodel of their previous home, agreed the house could become a special home.

“This is a perfect example of Northwest architecture,” says Robert. “The traditional, over-embellished style was nice, but it was fighting with the original architecture.”

Curt says, “Our goal was to make it more contemporary and fit the architecture of the home.”

For instance, the heavy wood railing dividing the dining area and the living room didn’t fit with the open floor plan.

“Indoor fencing is a pet peeve of mine – it just had to go,” says Curt.

A balcony built over the entryway was blocking the natural light from windows and a skylight in the master suite. Removing the balcony not only brightened the entire house, it also provided space for a 7.5′ x 9.5′ painting by Milton Wilson that they have owned for about 25 years.

Curt says Robert, who served as the contractor for the project as well as the interior designer, came up with several other changes to brighten the 1981 home. They added lighting and brightened the walls. Interior doors were widened to the full width of the hallway, and a window at the end of the hall was expanded so one can see from one end of the home to the other and outside to the surrounding forest. Curt also enjoys not being able to see any nearby homes from any of the windows and still be five minutes from town, which he says is “pretty amazing.”

Robert says the biggest challenge was the off-center fireplace in the living room. They were able to gain space and brighten the room by putting in a zero clearance fireplace and running the flue at a 45-degree angle to the chimney. Since the new fireplace is a flatter, sealed unit and does not need a hearth, it only projects 22 inches into the room instead of the 42 inches the old fireplace stuck out.

When the changes were complete Ted says he was amazed.

Curt agrees, “We didn’t expect to love this house as much as we do. We are so happy to be here.”

The couple took possession of the home March 22 and moved in July 7, 2016, after the transformation was complete.

Ted had purchased a mezuzah when he was in Tel Aviv in May as the chair of the Portland Organizing Committee for the “See Israel with Pride” mission. Portland took seven participants on the Jewish Federations of North America trip to experience Israeli culture, politics and character through a LGBTQ lens. He affixed that mezuzah to a side door.

For the front entry, they planned a gathering at their new home culminating in a ceremony in which Rabbi Michael and Cantor Ida Rae Cahana of Beth Israel affixed a second mezuzah to the front doorpost.