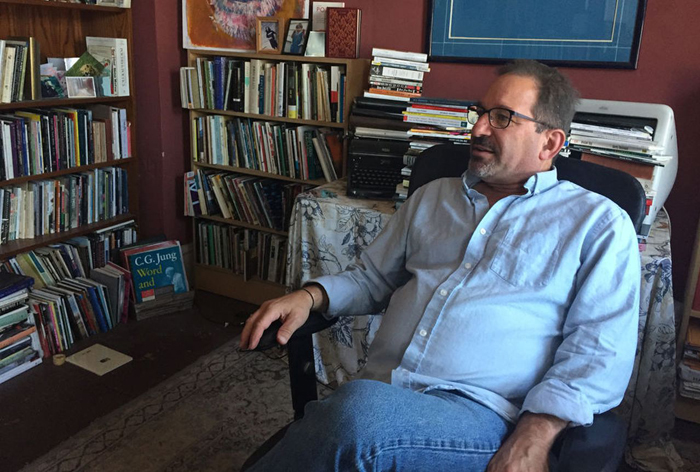 Photo: David Biespiel in 2019, in his office at the former home of the Attic Institute, a writing center he founded. Amy Wang | The Oregonian/OregonLive

By Amy Wang | The Oregonian/OregonLive

As a child, David Biespiel knew who he was: a Jewish boy growing up in Meyerland, Houston’s Jewish enclave. One day, he’d be a rabbi.

As Biespiel navigated his teens, however, he began questioning Judaism, hammering away ever more aggressively until he created irreparable cracks between himself and his community and between himself and his faith. At 18 he left Meyerland for good, after what he describes as “a public quarrel with one of the city’s leading rabbis.”

But Meyerland never left Biespiel: As he moved from state to state, ultimately settling in Oregon, he thought of himself always as an expatriate Texan. In his new memoir, “A Place of Exodus: Home, Memory, and Texas” (Kelson Books, 202 pages, $20), Biespiel writes, “The streets of Meyerland all these years have been like the bones of a former life, an heirloom I carry in a wooden box from city to city.” With the lyricism he’s cultivated as a nationally recognized poet (who wrote a poetry column for The Oregonian/OregonLive for a decade), he meditates on the places and selves we call home, no matter where we are.

“A Place of Exodus” creates a sense of place that is almost palpable on the page. Biespiel describes a tight-knit 1960s and ’70s community where the air at holiday dinners was filled with “Chag Sameach, Y’all’s” and where the Houston Oilers were cheered not just as a football team but as a football team that hired a Jewish head coach. Finally back in Meyerland for a visit decades later, Biespiel is embraced eagerly by childhood friends who take turns asking him, as if he’d just gone out on a beer run and never returned, “David, where have you been?”