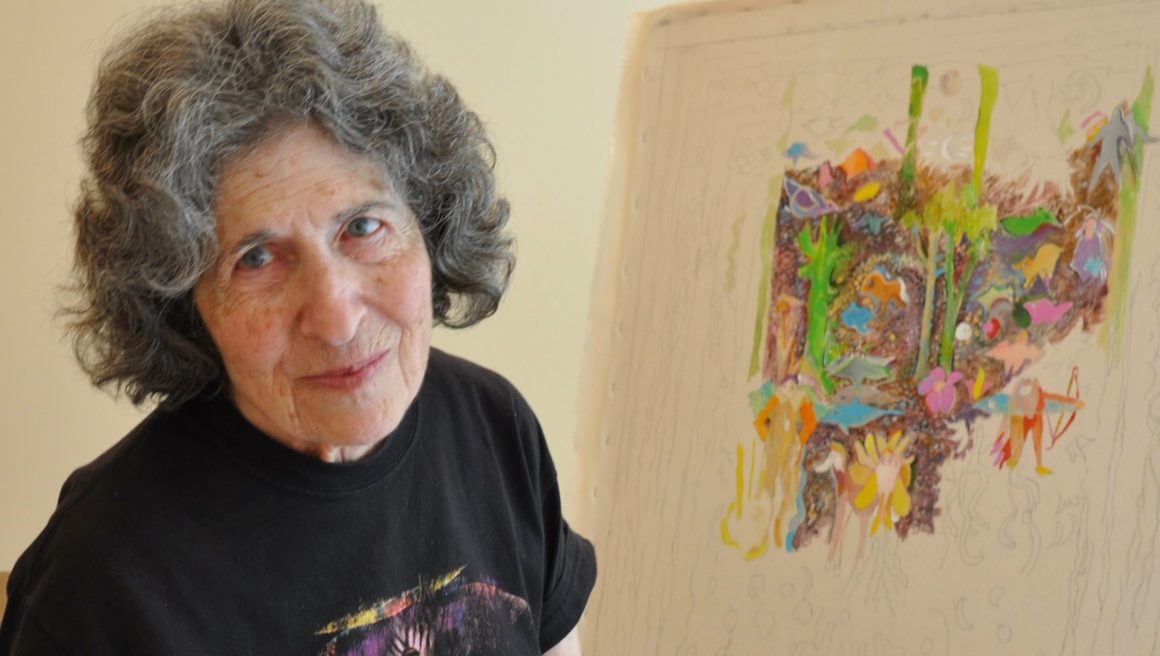 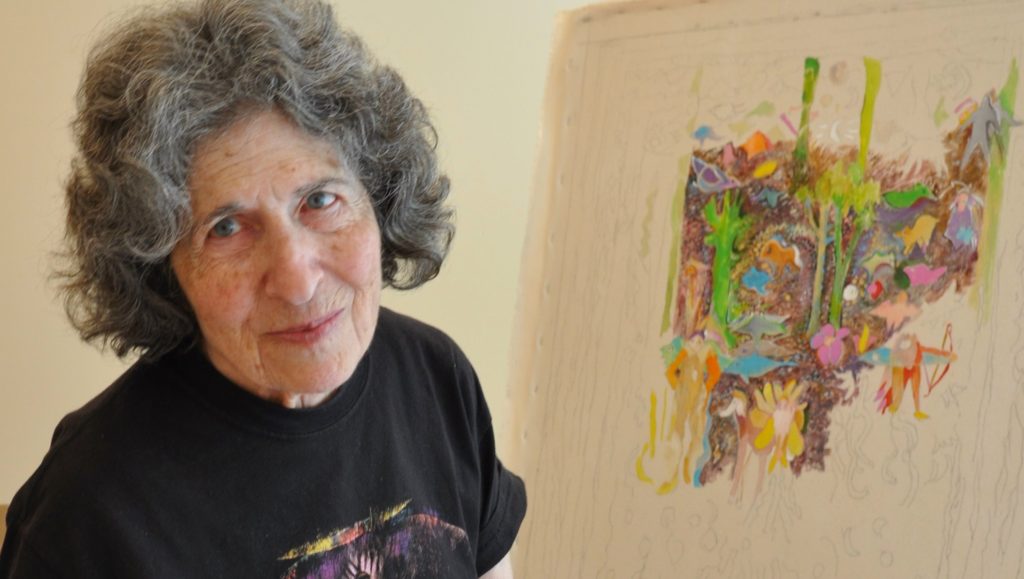 Above: Jeanine Semon in her studio at Rose Schnitzer Manor. All of her paintings begin with intuitive, spontaneous drawing. At left, Jeanine Semon’s favorite painting is the King’s Coat, which she says goes back into the period when she made large unstretched canvases, loosely dropping paint on canvas, spraying water on the colors, adding layers of designs, ribbons, buttons, creatures.  Below right, Jeanine and Ed Semon at Rose Schnitzer Manor. Photos by Deborah Moon

Jeanine Semon believes art has the power to change people. 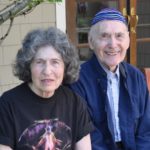 Last year Jeanine, 88, and Ed, her husband of 65 years, moved to Portland to be near their daughter, Betsy Kaufman, and two of their seven grandchildren, Zachary and Gabriel. They have two sons – Bruce lives in Wisconsin and Jesse lives in Los Angeles.

Jeanine and Betsy volunteer weekly to help cook dinner for homeless women at a local church. Recently Jeanine donated two of her paintings to the church that hosts the Friday night dinners.

“My two angel paintings were presented to a church in Portland that cares for homeless women and women of the streets, to be hung in an all-purpose room where the women are cared for,” she says. She donated the paintings because “You get to an age when you want to place your art” and “there is an unusual quality in my art – the gift of healing. If you are with my art, you feel good.”

The power of art was also the focus of a project she completed in Milwaukee shortly before the couple moved from Wisconsin to Oregon. She wrote a successful grant proposal to go to five city schools as an artist-in-residence to teach youth “the value of creativity not being stifled.”

Jeanine’s five paintings of migrating animals were the focus of school program she did in Milwaukee just before moving to Oregon.

“My art and discussion influenced kids from the inner city, and they did marvelous art,” she says.

“I teach there is no such thing as wrong art, and they believed me because it is true. … I discussed the joy and peace art brings to me, and it bought it to them. … It changed them.”

The couple decided to move to Rose Schnitzer Manor after Ed, 90, had a serious stroke. Jeanine says the yoga classes and other activities at RSM have been very helpful for Ed’s recovery, and she enjoys being around older people.

“Most people here are very intelligent, and you get a sense of what they did in their lives,” says Jeanine.

Jeanine has a studio set up in the manor, and during the summer several of her paintings were exhibited in RSM’s May Living Room.

Jeanine did not start painting in earnest until age 48. She earned a Bachelor of Fine Arts from the University of Wisconsin in 1978.

Since then, she has exhibited in galleries and sold many paintings, but “never reached the New York scene.”

“I compare myself to the free migration of animals,” says Jeanine. “Moving animals in these works represent the unstoppable “life force that flows through all of us till our final breath.”

Jeanine has also written four books reflecting her philosophy on life and art. In her most recent book, Living Art, Living Young: 85 and still going strong, she shares her “life patterns” that she feels have made her a strong, active senior. “I am a swimmer, walker and painter,” she says. “I did what felt right and made me happy. I didn’t do what other people might tell you to do.  … We intuitively know what is right and what makes us happy.”

Her books, as well as four books Ed has written, are available at Jeaninesdream.com. 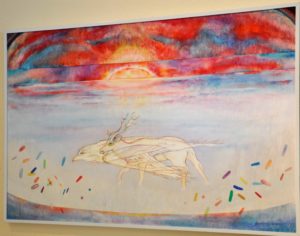 EAGLE/ANTELOPE – TRANSFORMATION relates to my base of nature, where everything is connected. “Primitives” have much respected creatures, making prayers of permission and gratitude before they hunt. As a young painter I learned this kind of respect from reading the writings of Rev. Thomas Mails who wrote about and painted the Plains Indians. Eventually this painting appeared for me on a background of ice and sunset. The image is spare, but in my eyes, successful.

FOX’S FACE was from a drawing I made while visiting a land with vortexes in Montana. I put the drawing on canvas, painting the central horizontal stripe green. As I worked with it, the green expanded to the full rainbow. To me the top portion looks like land formations, not unexpected because in Montana I spent a lot of time outdoors, walking. In the end as a surprise there appears to be the shape of a white angel where the fox’s snout would have been. When you work intuitively you find surprises. 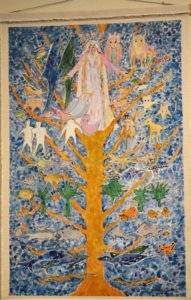 THE YGGDRASIL TREE compares to the Tree of Life, an important image recognized by many people in the world. … All life is intertwined in its branches, even God announced him or herself at the top. It was a powerful enough experience that I hired a videographer to shoot the painting and completion process. See the video at jeaninesdream.com.