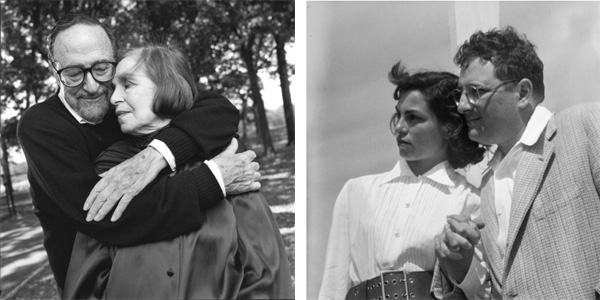 The Oregon Jewish Museum and Center for Holocaust Education, OJMCHE, announces the creation of a fund to support on-going photography exhibitions through a gift from the Arnold and Augusta Newman Foundation. The gift of $250,000 will create the Arnold and Augusta Newman Photography Fund and will ensure that the museum can bring national and international photography exhibitions to Portland as well as supporting lectures, receptions, workshops, and the acquisition of photographs for the Museum’s permanent collection.

The Foundation’s mission is to further the legacy of Arnold Newman, the influential and revered photographer and educator who had a profound influence on photographers in the latter half of the 20th Century.

“This generous donation makes it possible for OJMCHE to continue to mount powerful photography exhibitions that challenge viewers and share important historical lessons and truths,” said Director Judy Margles. “Over the years the museum has hosted numerous important photography exhibitions, including currently Gillian Laub’s ‘Southern Rites,’ which tells the story of on-going racial violence and tensions in Montgomery County, Georgia. The first exhibition supported by the fund will be next fall’s ‘To Bear Witness – Extraordinary Lives’ an exhibition in partnership with The Immigrant Story and Portland photographer Jim Lommasson. Through photographs and profiles the exhibition will capture, share, and preserve the stories of a small group of individuals from varied backgrounds who left their homelands for safe haven in Oregon. The  OJMCHE  board, staff, and community are incredibly grateful to board member David Newman and his brother Eric for creating this fund.”

On behalf of the foundation, Eric and David Newman said, “Although our parents were not particularly observant, they were Jewish to their core. This is why our father chose to have exhibits at OJMCHE and why he would be so pleased with the foundation’s gift. OJMCHE affords the unique opportunity to showcase not only the artistic side of photography, but also the journalistic and documentary sides that are so important to tell the story of Jews in Oregon and the world.”

“As for myself, I work the way I do because of the kind of person that I am – my work is an expression of myself. It reflects me, my fascination with people, the physical world around us, and the exciting medium in which I work. I do not claim that my way is the best or the only way, it is simply my way. It is an expression of myself, of the way I think and feel.” – Arnold Newman, A Life in Photography

Arnold Newman (1918-2006) is acknowledged as one of the great masters of the 20th century and his work has changed portraiture. He is recognized as the “Father of Environmental Portraiture.” His work is collected and exhibited in the major museums around the world including the Metropolitan Museum of Art, New York; The Museum of Modern Art, New York; The Chicago Art Institute; The Los Angeles Museum of Art; The Philadelphia Museum; The Tate and the National Portrait Gallery, London; The Israel Museum, Jerusalem; and many other prominent museums in Europe, Japan, South America, Australia, etc.

Newman was an important contributor to publications such as New York, Vanity Fair, LIFE, Look, Holiday, Harper’s Bazaar, Esquire, Town and Country, Scientific American, New York Times Magazine, and many others. There are numerous books published of Newman’s work in addition to countless histories of photography, catalogues, articles and television programs. He received many major awards by the leading professional organizations in the U.S. and abroad including the American Society of Media Photographers, The International Center of Photography, The Lucie Award, The Royal Photographic Society Centenary Award as well as France’s “Commander of the Order of Arts and Letters.” In 2005, Photo District News named Newman as one of the 25 most influential living photographers. In 2006, Newman was awarded The Gold Medal for Photography by The National Arts Club. He is the recipient of nine honorary doctorates and has lectured and conducted workshops throughout the country and the world.

Arnold Newman died on June 6, 2006, and Augusta Newman died on February 18, 2009. The Arnold and Augusta Newman Foundation was established in 2007. The Foundation’s mission is to further the legacy of Arnold Newman by supporting photographers and photography students and helping to disseminate Newman’s photographic works.  The Foundation supports the annual Arnold Newman Prize for New Directions in Photographic Portraiture, scholarships at the Maine Media Workshops, and ICP, annual lectures on photography at six museums around the country including the Portland Art Museum, and exhibits of Newman’s work.