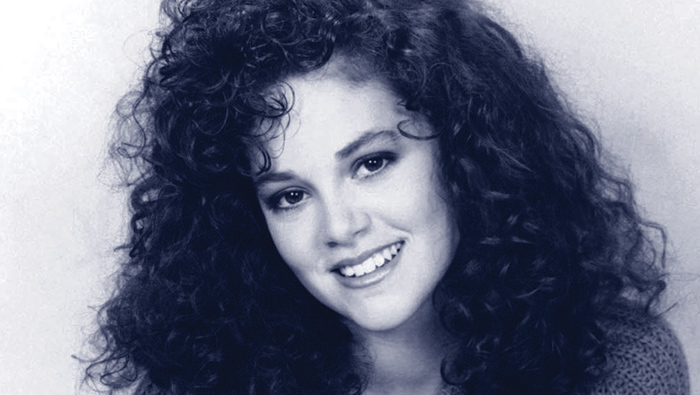 Twenty-eight years ago, I had a chance encounter with a talented and beautiful young actress, at an ATM in Los Angeles. Rebecca Schaeffer was just 21 years old, and had already starred in a successful sitcom with Pam Dawber, called “My Sister Sam.” I knew she was from Portland, and as we chatted, I told her that my brother had a huge crush on her. We both went through that mental dance of “Hmm, I wonder if she is Jewish” and during the 20-minute conversation, it came out that we had gone to the same synagogue and Sunday school and knew several people in common.

Although I felt that she wanted to continue the conversation, I didn’t want to take up any more of her time.

As I walked away, she called out, “Hey, say hello to your brother for me.”

Not long after that chance encounter, Rebecca was murdered. I felt compelled to write a note to her parents, Benson and Danna Schaeffer. Danna wrote a very heartfelt note in return.

The poignancy of that conversation has stayed with me all of these decades later.

Recently, I had the privilege of interviewing Danna Schaeffer. After our conversation, I realized that the light that was Rebecca Schaeffer shined on everyone she met. And the love of her parents has helped to keep that light shining brightly.

“You in Midair” has received wonderful reviews. Why did you decide to write the play now? (See Portland dates below)

Right after Rebecca was killed, the anguish was so excruciating. You just can’t imagine that your life won’t be ruled by that forever.

Now it has been 28 years and that initial anguish is softer, but there is also new pain – like (the idea of) grandchildren. It is very interesting to miss people you have never known, but we do. There is also my own mortality. I wanted people to hear this story from my point of view.

When did you start working on the play?

Two years ago I started writing a memoir about growing up in New York with my parents. At the end of the memoir, I had one “fast forward” chapter that included Rebecca’s story.

One day she said, “You have a lot of voices in you that need to come out.” She suggested I write a play and do a solo show. She made it seem doable. So from that idea, I began taking acting lessons too.

You only began studying acting two years ago?

(Laughing) Yes. I’m lucky I had some very good teachers, Michael Mendelson and Chris Harder. And I let it (the story) be very organic. I let come up what needed to come up about the experience of loving Rebecca, and losing Rebecca and then living beyond her. Then I shaped it. I joined PDX Playwrights, which presents staged readings at Portland’s annual Fertile Ground Festival. I also acquired a fabulous director, Julie Akers. I did two performances last January at the festival, and then I decided I needed a fuller production with lights, sound and a set.

Did you always plan to act in the play?

There was never a question of anyone else acting in it but me.

How did you come up with the title?

Coming up with the title was agony. I wanted something from Shakespeare, but nothing felt right. The title is from a Stephen Sondheim work.

What do you hope people get out of it?

I didn’t intend it to be a teaching exercise. And I wasn’t doing it as a cathartic thing, but it has turned out to be 50% cathartic and 50% re-traumatizing. But mainly I needed to create a piece of art about Rebecca and living with losing her.

What or who got you through in the beginning and the later years?
You put one foot in front of the other. I was not raised religiously, so I did not have a spiritual framework.

But Benson was a member of one synagogue, and Rebecca had been the president of her youth group at another. So at her funeral, rabbis from both synagogues came and spoke eloquently about Rebecca. So there was a spiritual framework.

Where else did your find support?

Benson and I having each other.

The three of us (Rebecca, Benson and Danna) were such a tight triangle. We had just talked to Rebecca the night before she was killed and our last words to each other were, “I love you.”

Rebecca used to say, “No matter where we are in the world, we are like a three-legged stool.”

Benson and I had each other, and even in our worst moments, we would never break apart that three-legged entity. And we were very lucky to have family and friends.

We were also lucky to have a fabulous prosecutor, Marcia Clark, and two very committed detectives. The murderer was brought to justice and that made it easier for us to go on.

You seem to look at the big picture of death and mourning and how others are affected.

Rebecca looked at the big picture. When she was 4 or 5, she and Benson were making cookies and they mixed all of the ingredients, and then when they were eating them, she asked, “Daddy, where were the cookies before we mixed the eggs, the flour and the butter and eggs?” She was such an existential person.

Then going forward two decades, a neighbor of Rebecca’s told us that she ran outside when she heard the gun shot and heard Rebecca say, “Why?” Not “Why me?” which would have been more self-centered, but “Why?” – she was still seeking to understand the bigger picture.

Do you feel a responsibility to carry on for Rebecca?

There is definitely an element of carrying on for her. Sometimes I’ve said that I am her ambassador. But it is a two-edged sword, as she can’t have fun, so can I have fun on her behalf?

When you perform the play, are you removed from it as an actor, or do you have to prepare yourself emotionally just to get through it?

In the beginning, I remember asking the director, “Is this me up on stage or is this me recreating me?” When I am doing it, it can be enjoyable, but afterward I feel drained. It is also hard on the director. She feels terrible asking me to relive what happened each time she asks me to approach a line differently.

Has writing and acting in the play helped the healing process?

I think having to put things into words in a way that people sitting in front of you will understand and feel has helped me with the experience of the loss.

I also wanted to represent the continuity of family and history and the great wheel of suffering. So in the play, I talk about Rebecca’s grandmother arriving in New York in 1924 at the age of 16 as an orphan. And 60 years later, Rebecca arrived in New York also at the age of 16 (to pursue a modeling career).

In the play her grandmother sings a Yiddish song to Rebecca So I sing that and another one. My husband found the songs, and coached me on my accent. Benson is very private and perhaps he felt exposed by the play at first. And then some months into it, he told me that he felt that I was doing it for him too. I was very happy about that.

After Rebecca was murdered, you became an activist for gun control. Are you still involved with gun legislation?

I worked so hard on the gun bills. I delivered three yes votes on the Brady Bill. I loved lobbying. I loved Salem and Washington, DC, and all of that. But today, it seems so fruitless. It really does.

I read somewhere that Benson said, “Getting involved with the gun control issue helped us to focus our anger.”

Benson had plenty of anger. It might have helped him with the anger, but I didn’t have anger.

From the beginning I decided that I wasn’t going to give the murderer any extra energy, because I wanted to save all of my energy to think about Rebecca.

And then you would somehow still been connected to him?

Yes, it would have been a passionate bond that I didn’t want.

What do you feel is Rebecca’s legacy?

Some of the impetus for doing this play was to show Rebecca’s depth and caring. She was also ambitious and confident, but that wasn’t the whole person. The truth is, she was cut off too young to finish giving what she had to give.

Is there a story about Rebecca that represents who she was at the core?

When she was 3, I dropped a glass and crouched down to pick up the shards and cut myself. Rebecca came over to me and put her little arm around my shoulders and said, “Did you hurt yourself?” with this enormous compassion. She came out that way and I really think that is who she was.

What are your plans for the future?

I want to take this play to the Hollywood Fringe and to a theater in Berkeley. I really want to do a show about aging and its amusement.

I may also turn, “You in Midair” into a book. And I do have a mystery that I want to write. I love mysteries.

DANNA SCHAEFFER: You in Midair