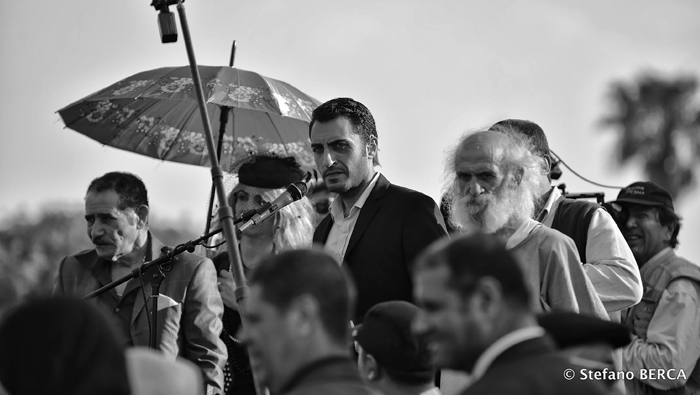 In the immortal “Casablanca,” cagey club owner Humphrey Bogart remarks that he came to the titular Moroccan city “for the waters.”

When police captain Claude Rains points out that they’re in a desert, Bogart’s Rick replies enigmatically, “I was misinformed.”

Michael Botbol, the Moroccan-Jewish protagonist of the picaresque comedy-mystery “The Midnight Orchestra” can identify with Rick.

Summoned to his birthplace by his musician father after more than 30 years abroad, Botbol finds himself adrift in Casablanca without rhyme, reason or purpose after the old man succumbs to a heart attack almost immediately upon their reunion.

With a Muslim taxi driver as his guide, sidekick and erstwhile source of comic relief, Botbol dives into the murky past of his childhood and his father’s life and legacy. In due course, and after a succession of oddball adventures, he is free to create a future without debts, guilt or masks.

“The Midnight Orchestra” screens in the Portland Jewish Film Festival.

At its core, French writer-director Jérome Cohen-Olivar’s diverting saga depicts the not-unfamiliar journey of a stubbornly independent and somewhat resentful son forced to acknowledge – and embrace – his father’s influence on his life.

The freshest aspect of the film is its setting in a place where Jews and Muslims once cohabited peacefully. The friendship that develops between Botbol and his driver, Ali (Aziz Dadas), is plainly intended to suggest that good will between men of different faiths and cultures is possible, and even inevitable, if they just get to know each other.

As Botbol’s childhood memories are triggered, “The Midnight Orchestra” employs wonderfully executed and touching flashbacks that reveal how Michael idolized his father. In a few crucial cases, Botbol can only now comprehend the meaning and significance of events he couldn’t make sense of as a child.

We learn early on that the Botbol family left Casablanca after the Yom Kippur War, when anti-Jewish attitudes escalated. They immigrated to Israel, where Michael came of age before moving to the United States to make his fortune in business.

As it happens, Michael was a gifted pianist as a child. But instead of following his father’s path, he went where the money was. So we come to see his odyssey to Casablanca, and his kooky scavenger hunt around town searching for his dad’s old bandmates, as a directive from his father from beyond the grave.

Those musicians, all these years later, have become a street beggar, an imam and a pimp-slash-nightclub owner. We realize well before Botbol does that his mission, not unlike Jake and Elwood’s in “The Blues Brothers,” is getting the band back together.

As if there are not enough twists and ironies in “The Midnight Orchestra,” Botbol is deaf in one ear. This particular conceit does pay off, which is more than can be said of Ali’s over-the-top reactions to every bizarre situation they encounter.

The movie’s strategy of lightening an earnest father/son story with broad humor is ambitious and admirable, but it doesn’t always work. For that matter, more Moroccan-Jewish music would have been nice.

En route to getting to the bottom of a mystery that Botbol doesn’t even realize he’s unraveling – the real reason his father left Morocco on a moment’s notice with his wife and children – he takes a nocturnal dip in a large body of water.
Perhaps Bogey wasn’t joking after all.