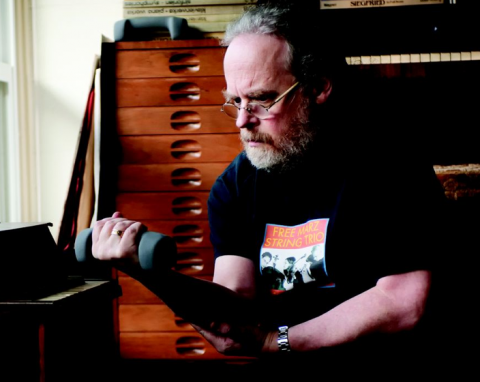 Bob Priest, creator of March Music Moderne, is a heavy lifter when it comes to creating musical events. Photo by Chris Leck

One doesn’t often get the chance to meet a genuine impresario. Merriam-Webster’s dictionary defines impresario as 1) the promoter, manager or conductor of an opera or concert company and 2) a person who puts on or sponsors an entertainment. The word comes from the Italian word impresa, “undertaking.” Both the definitions and the word origin are apt descriptions of Bob Priest, the creator of March Music Moderne, a multimedia celebration of music, visual art, film and literature. Now in its third year, March Music Moderne opens on March 7 with a concert titled “Ears Wide Open,” and ends on March 23 with a salute to Finnish composer/conductor Esa-Pekka Salonen.

Sprinkled throughout MMM’s 16-day run are several works by Jewish composers, including locals David Schiff, Art Resnick and Bonnie Miksch. The Arnica String Quartet will perform “Tenebrae,” a 2002 composition written by Argentinean-Jewish composer Osvaldo Golijov as a response to the Second Intifada, on Friday, March 15. Yasmina Reza’s short story “Lucette Moses” will be part of a concert featuring Priest’s own string quartet on March 8. Works of Polish-Jewish writer Bruno Schulz will be featured in the “Ears Wide Open” concert. In addition, the Jerusalem String Quartet will be in Portland for a unique series of concerts; they will perform all 15 of Dmitri Shostakovich’s string quartets over four different nights. In to- tal, March Music Moderne will present 32 events over 16 days, at 19 different venues scattered all over Portland.

“Our theme this year is Global Village PDX,” says Priest. “We’re also celebrating the 100th anniversary of the premiere of Igor Stravinsky’s ‘The Rite of Spring,’ by commissioning 10 composers to write a one-minute march for string trio using some aspect of ‘The Rite’ that particularly appeals to them: rhythm, instrumental colors, a particular melody. We’re call- ing it ‘The Rite to March.’” For people who may be less than enthusiastic when they hear the words “new music,” Priest has this advice: “‘New music’ is just a very loose, inappropriate and inaccurate term for an incredibly wide swath of musics … don’t let an umbrella moniker lead you to believe you’ll hear any one kind of sound. Keep that in mind. Dip a toe in and sample dif- ferent bits; I’m sure some of it will appeal to you.”

March Music Moderne isn’t Priest’s first venture into impresario-dom. A composer himself, Priest has been immersed in 20th- and 21st-century music for most of his life, first as a rock guitarist and later as a composer, lover and champion of new music. “My Jewish grandmother was an opera singer in Vienna, and even though she took me to some of her vocal coaching sessions, I didn’t get interested in classical music until I was 16,” Priest recalls. “A friend loaned me recordings of Debussy’s ‘Prelude to the Afternoon of a Faun’ and Liszt’s ‘Les Préludes.’ We listened to them when we were high, and I dis- covered a totally saturated sound world, very similar in essence, if not style, to what I experienced when I listened to The Beatles’ ‘Sgt. Pepper’s Lonely Hearts Club Band.’ From then on, I was hooked.”

Priest’s first experience with contemporary music festivals came while he was a Fulbright scholar in Warsaw in the early 1980s, studying composition with renowned Polish composer Witold Lutosławski. While in Warsaw, Priest attended Warsaw Autumn, a contemporary music festival. After Priest returned from Poland, in 1985, he settled in Seattle. “I saw the vitality of the music scene in Seattle and decided to establish my own music festival, inspired by Warsaw Autumn. I wanted to present what I felt were the important new works of our time, with an international outlook and international scope.” In 1988, Priest launched Seattle Spring, a festival of new music and world arts, which ran from 1988 to 1992. From the outset, Priest’s vision for his festivals has always embraced the widest possible scope. “I’m interested in all forms of culture. My concerts combine music with theater, film and lighting; I’ve even used perfume in some productions. I like to create multi-sensory experiences.”

For more information, or to see a complete schedule of March Music Moderne events, go to marchmusicmoderne.org.
Elizabeth Schwartz is the annotator for the Oregon Symphony, a co-host of the Yiddish Hour on 90.7 FM KBOO Community Radio and a freelance writer living in Portland.