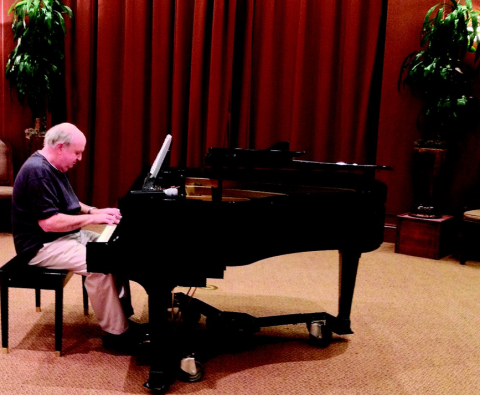 Following a rendition of “Yerushalaim Shel Zahav” toward the end of his final jazz piano performance of 2012 at Rose Schnitzer Manor on Nov. 30, George Fendel delivered a piece of good news to resident Sheldon Petcher and the enthralled audience of three dozen residents, caregivers,and staff. His next concert will not only take place soon, it will be a special one: on Saturday, Feb. 10, Fendel will join forces with his son Marc, a professional alto sax player in Seattle, for a special concert at Classic Pianos Recital Hall.

Maurice Unis, Classic Pianos owner, who helps Fendel curate an occasional jazz series at his Southeast Portland-based company, once called Fendel an icon of Portland’s jazz community. With good reason: Fendel is a three-term Jazz Society of Oregon president; a 50-year collector of some 2,000 LP and 6,000 CD jazz records; and a 26-year jazz radio veteran, most recently with 89.1 KMHD, where he has hosted a four-hour Sunday program since 1997. “I love the radio,” Fendel said. “I’ve always had complete freedom to play what I want. I still get a little rush when going on air.”

None of this surprises Fendel’s wife of 44 years, Laura, an active member of Portland’s Jewish community [see October 2012 issue of Oregon Jewish Life]. She likes to say, “George lives and breathes jazz.”
Their daughters, too, inherited Fendel’s passion for music: Reyna is a professional opera and Broadway singer; and Aliza, who moved to Jerusalem last year, is a singer, writer and teacher. “I’d love to visit Israel again,” Fendel said. On his previous visit in 1993 he felt he’d found a second home. “But my health will no longer allow it.”

Fendel has also served on the board of Congregation Neveh Shalom, and in the 1960s, he helped lead Camp Solomon Schechter, in Olympia, WA. Now, he admits, “Laurie shares beautiful stories of people she works with, and I focus on jazz. We support and encourage one another – it’s a perfect balance.”

A native Portlander, Fendel finds ways to give back. The Manor show at Cedar Sinai Park is one of several he offers without charge every year. His mother, Gladys, was a resident there from 1998 to 2006.
“She loved this place,” Fendel said. As for him, “They have a wonderful grand piano, and the residents keep coming to the performances.”

CSP Life Enrichment Coordinator Katherine Watry said Fendel has become very popular with Manor residents. “George isn’t just an entertainer whose devotion to jazz music shines through the notes he plays,” Watry said, adding that if enough residents express interest, her department will arrange for a trip to the February show. “We all consider both George and Laurie to be dear friends.”

A Gershwin fan, Petcher underscored Fendel’s openness to requests from the audience. What is more, Petcher said, referring to Fendel, “I love George, his style and demeanor – he’s one of us. I’d like to see him come play as often as possible.” The elders’ appreciation for music doesn’t escape Fendel. Making a comparison with gigs he has done at restaurants and private parties, Fendel said, “It’s a wonderful crowd. They listen.”

Peter Korchnak is a freelance writer in Portland. He explores his immigration experience at AmericanRobotnik.com. His book, Guerrilla Yardwork: The First-Time Home Owner’s Handbook, will be out in spring 2013.