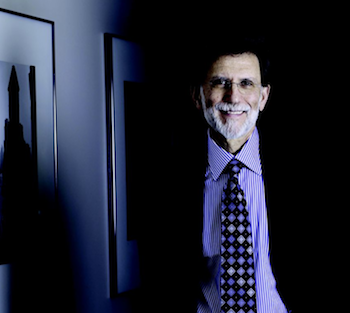 Patron of the arts, philanthropist and a leader in the Jewish and secular community, James H. Winkler will receive the 14th Annual Rabbi Joshua Stampfer Community Enrichment Award at 6 pm, april 11 at the Benson Hotel at a non-fundraising event.

“I believe in community and in our individual ability to effect positive change and am grateful for the gifts i have received and for the opportunity to share with others,” says Winkler. “i also believe in the transformative power of art.”

Stampfer was the first recipient of the award when it was created in 1999 by the four organizations he helped establish: institute for Judaic Studies, Oregon Jewish Museum, Oregon holocaust resource Center and Camp Solomon Schechter, along with Congregation Neveh Shalom, where he served as rabbi for 40 years and is now rabbi emeritus. The award honors an individual who has enriched Jewish cultural, education and/or community life with the dedication exemplified by Stampfer.

“The function of a rabbi is to stimulate fellow Jews to devote themselves to Jewish peoplehoood and Jewish causes,” says Stampfer, 91. “When i look at the number of people who have done that in our community, i feel very proud of this tangible expression of tikkun olam.”
Winkler has served on the boards of Cedar Sinai Park (as capital campaign chair and president), the OHSU Foundation and the Portland Art Museum, of which he is the current chair.

“I’m impressed with the extent and breadth of his involvement,” said award committee member Eve Rosenfeld, who, with her husband, Alan, is a past Stampfer award recipient. “the fact he is an immigrant and was born in Germany … represents the contribution immigrants make to our country.”

Born in Mallersdorf, germany, Winkler said his parents brought him to the United States in december 1950 when he was just under 6 months old. “My parents were born in Poland and survived the Holocaust,” says Winkler. “My mother escaped the ghetto immediately prior to its liquidation. My father’s story is somewhat more complex but he was in the Polish army under a Russian command. My mother insisted on immigrating to the U.S. rather than Israel where my parents’ surviving family members relocated.”

Like most past award recipients, Winkler says he is “humbled and embarrassed. the work is it’s own reward.” Committee member and past recipient (with husband, Irwin), Renee Holzman notes, “I think most honorees are reluctant to be honored. They do what they’ve done because it’s something they wanted to do and are passionate about. … Jim is an exceptional choice. He’s very modest, but he’s accomplished huge things because of his special expertise in high finance and real estate.”

Through the Winkler Development Corporation, Winkler has been involved in the acquisition, rehabilitation and operation of residential and commercial real estate, including aiding CSP to acquire four low-income housing projects for seniors in downtown Portland.

Since 2006 the Stampfer Award Committee also has recognized the Jewish youth of the community who have demonstrated exceptional devotion to tikkun olam. each year four youth organizations – United Synagogue Youth, NCSY, BBYO and the Oregon Jewish Community Youth Foundation – are asked to identify a young man or woman who does so. these recipients of the “Rabbi Joshua Stampfer Community Enrichment Award, Youth” are invited to attend the dinner as the committee’s guests and receive framed certificates. The committee emphasizes that the event includes no mitzvah moment or other fundraising. “It’s not about raising money, it’s about raising standards,” said Renee Holzman.