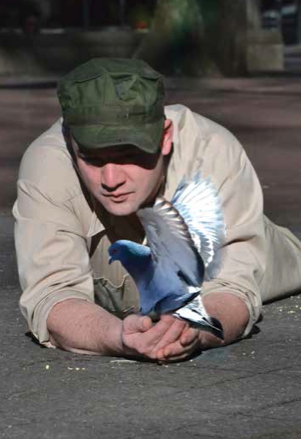 From a solid foundation of adapting compelling Jewish stories, the Jewish Theatre Collaborative soared into this season with the ultimate Page2Stage experience for Oregon audiences, which culminates this month with a world premiere Mainstage production.

This year JTC has drawn on successful elements piloted in its previous five seasons to create a season-long experience centered around one novel, A Pigeon & a Boy by Meir Shalev.

In November staged readings of Chapter One introduced the community to the stories of love and loss that the novel explores from British-mandate Palestine of the 1940s through Israel today. In January and February, Footnote performances put the novel into context with performances about the roles of memory and home. The season culminates with the world premiere production of A Pigeon & a Boy March 22-April 12 at Milagro Theatre, where JTC is in residency.

While JTC has used each of these approaches in previous seasons, this is the first time the company has woven all the elements into a theatrical tapestry that enables audiences to experience the novel on many levels over the course of the season. JTC Founder and Executive Director Sacha Reich adapted the novel with JTC core company member Doren Elias. The Mainstage production is told entirely using Shalev’s words, “but only 20,000 of his 400,000 words,” says Sacha. “The language has such power. As we are adapting, we are shedding so much text to make a two-hour production out of a novel of 300 pages.”

The process of adapting stories to stage is JTC’s bedrock. “Our narrative adaptations have been exhilarating,” says Sacha. Reflecting on her adaptation of Charlotte Salomon’s Life? or Theater?, Sacha asks: “How do you take a huge book of art, text and music … (and) bring it to 3D and let the audience experience the art … and what Charlotte heard in her head?”

Apparently she did it exceptionally well. In a 2011 review in the Jewish Review, Editor Paul Haist called it “a night of profoundly stimulating theater … uncommonly sophisticated. … It was memorable theater of the highest order.”

Looking back on that experience, Sacha says, “Bringing that to life was such an exciting opportunity. You hope you will have the opportunity to have a few more of those highs in life.

Those highs come from the adaptations we do.” Like its latest production, the roots of JTC are in Israel. A Portland native, Sacha moved to Israel in 1990, graduating from Hebrew University before spending three years training as a director at Seminar Hakibbutzim in Tel Aviv. Her grad project involved a Hebrew version of Shakespeare’s Twelfth Night. She served as the dramaturgue (providing context and history) in a Hebrew production of Comedy of Errors. “I had a background in Shakespeare, so I was involved in the development of the translation and understanding the nitty-gritty of what is embedded in the lines.”

In 1997 she moved to New York and then to the Bay area, where she had a theater company. She and her husband, Aaron Pearlman, also a Portland native, returned to their hometown in 2002 “to re-root ourselves here and to contribute to the growth of community here.”

The family, which now includes Lev, 13, and Ravit, 9, are members of Havurah Shalom.

Initially Sacha taught Judaic studies at Portland Jewish Academy, and her theater work was outside the Jewish community. She directed two productions and served as the artistic associate for Miracle Theatre Group, aka Milagro Teatro, where JTC is now in residency.

Sacha credits Aaron with the idea that led to JTC. “Stories are central to our experience as Jews, to how we see ourselves and the world,” says Sacha. “Aaron’s idea was how could we use theater as a really effective vehicle for story – to use that tradition in a new way. Theater is a vehicle for stories to gather community around complex conversations. That is central to all the programs we’ve developed.”

She says her relationship with Milagro and its founder and executive director José González have provided a model and mentorship to help JTC create a theater company responsive to and of service to the community – one that is culturally specific, yet resonates with the broader community through universal themes.

Sacha believes part of JTC’s work is to increase literacy in the community in terms of the complexities of Israel. “There is a low level of literacy, but strong polarization, so it’s difficult to talk about Israel respectfully and thoughtfully,” says Sacha.

That thought sparked both the current production and JTC’s pilot project in 2008, a series of staged readings in con- junction with a Portland State University summer course, Israel @ 60 Onstage. The series was designed “to use theater to bring together community to experience multiple perspectives at once.”The series also launched JTC’s now traditional “talkbacks” to provide both an opportunity for people to learn more and a forum to talk to each other and reflect.

Since their inaugural year, JTC has brought a series of original performances based on stories to diverse audiences. Their adaptations of Grace Paley, Etgar Keret and PJ Library book selections have been performed at schools and libraries. Life, Liberty and the Pursuit of Well- Being – a biographical play about Jewish American hero and public health pioneer Lillian Wald now has become a JTC touring company show that is now a pilot project in Portland Public Schools in the health and wellness curriculum.

In 2012 JTC piloted its Chapter One concept with a staged reading of My Father’s Paradise to launch the community-wide celebration of One Book, One Community for Jewish Book Month. JTC presented a staged reading of the first chapter of Ariel Sabar’s memoir that included art and foods from Kurdish Iraq and a talkback.

“The first pages of a book are where it happens or doesn’t happen for people,” says Sacha, noting the staged reading was designed to get people into the book so they would read it and participate in other events over the month. “People told me they would hear those voices (of the actors) as they read the rest of the book.”

JTC’s Footnotes concept began during 2012’s Fertile Ground festival with the thematically driven presentation of Café Baghdad. Though not derived from a specific book, this staged reading of memoirs explored the reality of Jewish, Muslim and Christian coexistence in 1920s’ Iraq, when 20% of the population was Jewish.

When JTC returned to the 2013 Fertile Ground festival, the audience’s reception of a staged reading of an excerpt from A Pigeon & a Boy inspired the company to choose the novel as its first season-long project.

“Both audiences and artists involved were stirred by the experience,” says Sacha. “Shalev’s beautiful language popped to life on the stage, and the themes of the novel seemed deeply resonant with audiences of all backgrounds. Perhaps it was the language, the love story, the mystery, the flight of the pigeon or the meditation on home – audiences encouraged us to take them on the journey of this book. And it was a journey we wanted to take.”