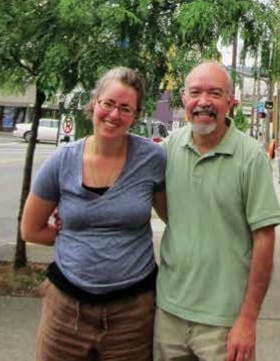 Jewish Theatre Collaborative, Portland’s Jewish theater ensemble, celebrates its fifth anniversary this year. Fledgling arts organizations come and go, and the fact that JTC launched its inaugural season in 2008, at the beginning of the Great Recession, makes this five-year milestone all the more noteworthy. But JTC has done more than merely survive; it has thrived, despite numerous challenges, including its most recent – the loss of its home theater space at Theatre! Theatre! in Southeast Portland earlier this year. “There are a limited number of performance venues in Portland,” says JTC Artistic Director Sacha Reich. “We lost two spaces in Southeast this year.”

Fortunately, JTC has found a new home at Miracle Theatre Group, aka Milagro Teatro, located on SE Sixth and Stark, in inner Southeast Portland. In their joint news release, Miracle Theatre notes, “This is not a new relationship but an evolution of an artistic affinity a decade old.” That longstanding relationship extends to Reich and José González, Miracle’s founder and executive director. When Reich returned to Portland 10 years ago, she directed two productions for Miracle. She also served as their artistic associate. “We’ve stayed close,” says Reich. “The leadership at Miracle has played a significant role in mentoring me as I try to figure out what JTC could be to both the Jewish community and the broader community. José in particular has provided guidance on a number of things for JTC, from audience development to funding. There’s a respectful relationship between our two companies.”

Officially, JTC will be in residency at Miracle, and the two companies will share office space and facilities, including Miracle’s main stage, costume shop and storage areas. “Part of our mission is to go to people where they are, and that’s been important from the beginning,” says Reich. “We’ll still perform at satel- lite venues around town, but having a home takes away the unpredictability of where we’re going to be long term. Knowing we have a home for the foreseeable future gives us an enormous amount of security, so more of our at- tentions can be focused on what we’re doing, rather than where we’re doing it.”

While this residency is a win-win for both JTC and Miracle, it goes beyond mere logistical or financial gains. Olga Sanchez, Miracle MainStage’s artistic director, explains, “It makes us really happy because we’ve had a long artistic and collegial relationship with Sacha; she’s our friend.”

Reich agrees. “This residency is much more than a rental; Miracle is really saying, ‘Anchor yourselves here and come in.’ ”

The two theater companies also share similar artistic goals. “For 30 years, our work has been dedicated to the Latino community; it’s culture specific,” says Sanchez. “Sacha’s work with the JTC is also culture specific. We share interesting inquiries: how do we serve our com- munity and its stories but also realize we’re part of a much larger community? We’re a minority. How do we make ourselves accessible to the community at large? How do we support our artists and our cultural aesthetics and the telling of our stories, and also connect to the larger community that is hungry and curious about who we are and where we’re coming from? Neither Milagro nor JTC is interested in isolating ourselves artisti- cally. We both want to find what makes us culturally identified but also universal.”

With JTC sharing office space with Miracle, Reich and González and Sanchez will be in regular contact. “It will be easier to collaborate on how to reach out to the larger community with our sto- ries and figure out how we draw people in. How does culturally specific work live in a diverse world, and how do we maintain our cultural identifiers without becoming a museum?” asks Sanchez.

Reich adds, “We’re going into a situa- tion without a lot of learning curves. It’s an exciting period for JTC. This season we’re presenting the next generation of our programming, and we’ll be able to focus on the work rather than worrying about logistics.”

Once JTC is fully settled in its new home, both Reich and Sanchez look forward to collaborating on productions together. Reich is also pleased to be able to present all of JTC’s productions on Miracle’s MainStage, a black box-style theater that seats approximately 120. “You can make very good art in that space,” says Reich. “We’re really thrilled to be able to welcome audiences there.”