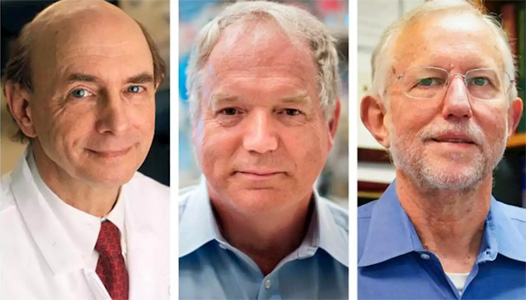 On Oct. 5, a Jewish scientist was one of three professors jointly awarded the 2020 Nobel Prize in Physiology or Medicine.

Harvey J. Alter, along with Michael Houghton and Charles M. Rice, received the prestigious prize for the discovery of the hepatitis C virus.

“For the first time in history, the disease can now be cured, raising hopes of eradicating hepatitis C virus from the world population,” said the committee in a statement. They announced the prize at the Karolinska Institute in Stockholm.

Alter, 85, is an intramural researcher at the U.S. National Institutes of Health. Houghton, who is in his 70s, is a virologist at the University of Alberta in Canada. Rice, 68, is a virology professor at Rockefeller University in New York.

The three made seminal discoveries that led to the identification of a novel virus.

Prior to their work, the discovery of hepatitis A and hepatitis B had been critical steps forward, though the majority of blood-borne hepatitis cases remained unexplained. The discovery of the hepatitis C virus revealed the cause of the remaining cases of chronic hepatitis, as well as made possible blood tests and new medicines that have saved millions of lives.

Alter demonstrated that an unknown virus was a common cause of chronic hepatitis, while Houghton used an untested strategy to isolate the genome of the new virus that was named hepatitis C. Rice provided the final evidence showing that the hepatitis C virus alone could cause hepatitis.

Liver inflammation – or hepatitis, a combination of the Greek words for liver and inflammation – is mainly caused by viral infections, although alcohol abuse, environmental toxins and autoimmune disease are also significant causes.

Hepatitis A is transmitted by contaminated water or food, and generally has little long-term impact on the patient. Hepatitis B is transmitted through blood and bodily fluids, and represents a more serious threat as it can lead to a chronic condition with the development of cirrhosis or liver cancer.