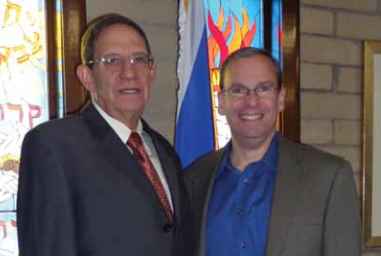 First and foremost, J Street founder and President Jeremy Ben-Ami wants everyone to know that “We believe in the right of the Jewish people to a national homeland in Israel, in the Jewish and democratic values on which Israel was founded, and in the necessity of a two-state solution.”

Ben-Ami and Carmi Gillon, the former director of Israel’s Shin Bet Security Agency featured in the Oscar-nominated ﬁlm, “The Gatekeepers,” spoke at Temple Chai in Phoenix. They discussed the challenges and opportunities Israel faces in the years ahead as it balances the risks of a negotiated peace in order to secure its future.

Ben-Ami sat down and talked about J Street being the political home for pro-Israel, pro-peace Americans ﬁghting for the future of Israel as the democratic homeland of the Jewish people. His replies have been edited for brevity and clarity.

CN: J Street has been experiencing a growing acceptance among America’s mainstream Jewish organizations. To what do you attribute this rise?

JBA: It’s natural for it to take awhile to get comfortable to new voices in the community. There are some pretty deep emotional feelings out there, and we are ﬁnally able to see that everyone is learning that we are clearly a pro-Israel organization. We may disagree on some matters of policy, but I’m sure what we all want is the same long-term goal, which is a safe and secure democracy. Once people saw that was truly our aim, the acceptance began to follow.

CN: What are you doing to overcome continuing reluctance of some to engage with J Street?

JBA: We continue to reiterate our basic principles and mission for one and try to reassure them. The other part we are doing is to share our personal stories and let the public get to know us as people. I want everyone to know that I come from a family that has been in Israel for over 130 years. My grandparents helped to found Tel Aviv. My parents fought for independence. My great grandparents were among the ﬁrst settlers in Petah Tikva and the ﬁrst aliyah. My father was an activist and leader in the Irgun, working for Israel’s independence and on the rescue of European Jews before and during World War II. Letting people in on our backgrounds helps to break down the remaining oppositions. It’s so important for us to answer any and all questions that people may have for us. Hopefully this will help erase any misimpressions that happened at the very beginning.

CN: What was the message of J Street’s 2013 conference theme “Our Time to Lead”?

JBA: It had several layers. The ﬁrst is that as Americans, we want to be strong and have strong American leadership in the eﬀort to reach the two-state solution. It’s wonderful that the two sides are talking, but (it is) without a strong mediator in the room working with both sides. It’s our time to lead in the peace process. Layer two is that in the American Jewish community, J Street feels that this is a very important moment for those of us who do believe in the two-state solution, that it’s our time to step forward and make our case. As the president and secretary of state pursue peace, they’ll need political and communal support, and we need to step forward and provide that. President Obama was in Israel in March and spoke to groups of young people to let them know that sometimes they need to be on the cutting edge and get out there and let their leaders know what they want and start the groundswell of letting everyone know what it is they want and take risks.

CN: You just mentioned the president. What are your thoughts on his views toward Israel?

JBA: The president has been a tremendous advocate of Americans’ interest in a peaceful solution in the Palestinian/Israeli conﬂict. His vision is persuasive that it’s necessary to make these changes and the path we’re on is not advantageous to anyone. He has three more years, and we’re all going to be working to get to the ﬁnish line together.

CN: Is it acceptable for us to criticize Israeli politics, as the Israelis do?

JBA: Absolutely, this is one of the fundamental arguments of J Street. It is healthy for us to open up and have a vibrant debate on what is essential in Jewish life. Argument is an essential and important way of life for the American Jews and the community in Israel. Some of our greatest learnings come from the debates of the scholars. Obviously the ﬁnal choices have to be made in Israel, but we should deﬁnitely be talking about what’s going on and how to make the changes. It’s terrible for us to remain silent.

CN: When you see the media describing you as a “dovish” group, how do you feel about it?

JBA: I personally disagree vehemently with the label, because the positions that J Street takes are the same as the security chiefs and prime ministers of Israel take – as well as the members of Knesset – all right-of-center parties. In fact I’m here with Carmi Gillon. The reasons we take these positions are out of a realistic assessment of what’s in the best interest of both Israel and the United States. The label of either hawkish or dovish clouds more clear-eyed decisions. Ending the conﬂict and creating two states for two peoples is the only way for Israel to remain a Jewish state and democratic in the long run. That is simply a statement of our analysis and where the future is headed.

CN: Do you think the twostate solution will come to fruition?

JBA: Well, there are only two choices: ongoing conﬂict or the two-state solution. I truly do believe that one day we will see two lands for two people. It will take a lot of compromise and sacriﬁce. This is actually a moment of opportunity. The Arab world is deeply distracted with their own problems. There is a conﬂuence of force that gives (us) another go at making this happen. Carmi Gillon (as shown in “The Gatekeepers”) supports J Street’s position on the peace process. A two-state solution is the only pragmatic resolution to the Israeli/Palestinian conﬂict and the only solution that will ensure Israel’s long-term security and interests in the region. The U.S. needs to push both sides to achieve a negotiated agreement. J Street is the only American advocacy organization solely focused on achieving this goal.