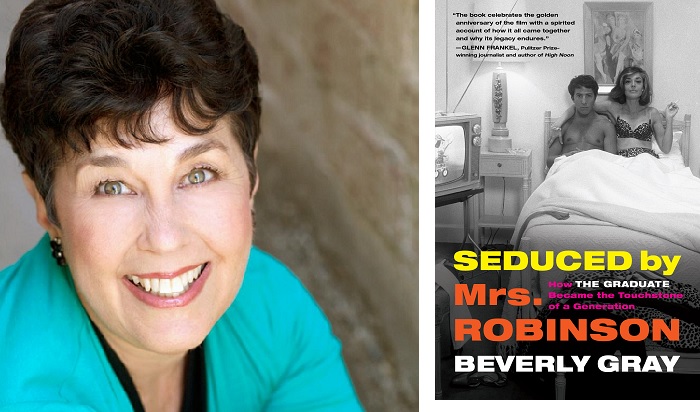 Beverly Gray will be in Oregon to talk about and sign her latest book, Seduced by Mrs. Robinson, How “The Graduate” Became the Touchstone of a Generation, at 7 pm, April 12, Bloomsbury Books, 290 E Main St., Ashland.

The path that led her to write this, her third book, didn’t seem on the horizon when she was completing her doctorate in contemporary American fiction at UCLA. She had planned a career in academia when she received two very different job offers. One was to work with B-movie legend Roger Corman, and the other was to teach English at a girl’s school. “I went to my professors and asked them which they thought was the better option, and they said, ‘Take the movie job.’ ” says Beverly.

She’s never regretted her decision, although she does admit to making some “pretty sleazy movies.” But she learned a lot – including not to take herself too seriously. At New World Pictures with Corman, her duties included editing scripts, writing publicity material, casting voice actors and collaborating with directors.

“I love working with writers and improving others’ ideas,” she says. Beverly teaches aspiring screenwriters at the world-renowned UCLA Extension Writers’ Program. “I’m trying to help the students be the best writers they can be, given the way they choose to approach it. I don’t promise anyone fame or fortune, or failure, but I want the script to be as good as they can make it – given what their goals are for it.”

Beverly’s first two books were Roger Corman, Blood-Sucking Vampires, Flesh-Eating Cockroaches and Driller Killers and Ron Howard, from Mayberry to the Moon … and Beyond. She was looking for inspiration for a third, when she realized the interesting turn that movies took in 1967 – they reflected real life.

“The baby boomers had been molded by our memories of JFK in 1963, the civil rights movement (both the positive, idealistic side and the other side with civil disturbances and riots) and the Vietnam War,” says Beverly. “The war was affecting our outlook on a day-to-day basis.”

One of the era’s films that particularly interested Beverly was “The Graduate.” “It does not mention the things going on – like racial strife and the war,” she says. “But the movie was very clever and powerful, and young people immediately connected with it.”

Beverly comments that “The Graduate” is like a Rorschach test; when she talks to people about the film, they all view it through the lens of what was on their mind at the time – from sex to feminism.

“For me, the whole party situation at the beginning of the film, where everyone welcomes the homecoming of this graduate and then proceeds to tell him exactly how he should live his life – that I really understood. It was exactly what I was feeling right about then,” Beverly says.

The underlying Jewish component of the film also fascinated Beverly. The director, Mike Nichols, himself a Jewish immigrant who came to the United States from Berlin as a child in 1939, was looking for a leading man who was out of the mainstream, someone who didn’t seem to fit into the context in which he found himself.

Beverly remembers a favorite quote from Nichols: “I kept looking and looking until I found Dustin, who is short and dark and Jewish, which is the way I envision myself.” Hoffman’s character resonated with a generation of young people who didn’t feel quite right themselves.

Seduced by Mrs. Robinson features insight about how the film was made, the various decisions that had to be reached and compromises made. It also touches on parts that aren’t necessarily obvious, such as the art direction and camera work. She also assesses how and why the movie is still with us today.

“It was really a fun book to write, and I enjoy talking about it,” says Beverly.

For more information about Beverly, including her entertaining blog, Beverly in Movieland, visit beverlygray.com.