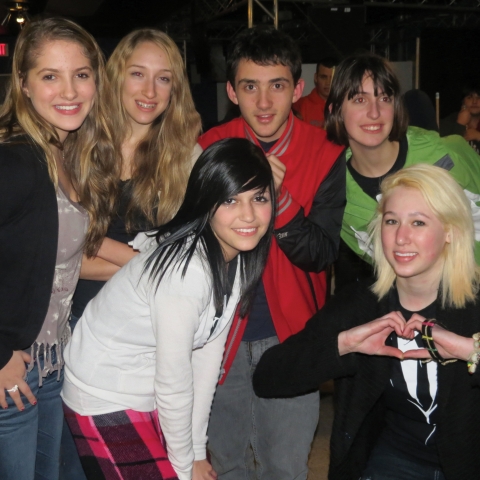 The Jewish Theatre Collaborative partnered with PJ library to bring their touring hit, “Hanukah: The Power of Light” to audiences around Portland this holiday season. Performers Darrell Salk and Sara Fay Goldman brought to life this stage adaptation of two of PJ library’s beloved holiday classics: Eric A. Kimmel’s “When Mindy Saved Hanukkah” and Patricia Polacco’s “The Trees of the Dancing Goats.”
Salk and Goldman played more than a dozen different characters during the course of the hour-long page-to-stage production.
During December, Hanukah: The Power of Light engaged and entertained more than 550 audience members at Gresham and Midland Libraries, Buckman Elementary School, Miracle Theatre and the Mittleman Jewish Community Center.
JTC’s year-round touring show Naftali, Story Voyager on the Yiddish Seas, also featuring Darrell Salk and Sara Fay Goldman, has been picked up by Young Audiences for their school roster and is available for performances year round. To schedule a performance, contact Sacha Reich at sacha@jewishtheatrecollaborative.org or at 503-512-0582.

25 students begin Melton Arab-Israeli conflict course
On Jan. 10 at Shaarie Torah, 25 students began a Melton course to study the history of the Arab-Israeli conflict using curriculum from Hebrew University in Jerusalem.
“I am tremendously excited to be studying in depth about the history of the Arab Israeli conflict with an instructor whose roots are in the Middle East. I expect that what we will learn will be unbiased, fair and objective. In other words, it will be in line with Melton’s core values,” said Brad Pearlman, one of the students and Melton vice president.
These students are taking one of many courses offered by Portland’s Florence Melton Adult Mini-School this winter with many beginning in February or March. Other courses include Genesis, History of Israel, Using Hebrew Roots to unlock Jewish texts for study and prayer, and perspectives on Intermarriage. To learn more, visit www.meltonportland.org.

Portland Melton reaches interfaith families, gains national attention
Portland Melton Director Sarah Liebman was invited to present a program on fact that 65% of Portland’s new Melton core students are part of an interfaith family at the North American Melton Directors’ Meeting held in Los Angeles Jan. 15-18.
“We have seen that Melton gives the non-Jewish spouse greater understanding and appreciation for Jewish practice and enables him or her to participate in Jewish education for their children. It helps the Jewish spouse explain the meaning and value of Jewish customs to a partner, in-laws, and children. Liebman attributed part of Portland Melton’s success in reaching interfaith families to the Holzman Foundation’s creation of a scholarship fund for interfaith families.
In addition to presenting at the Melton conference, Liebman will be teaching a course she developed on perspectives on intermarriage at the Portland Melton School starting Feb. 14. Register at www.meltonportland.org.