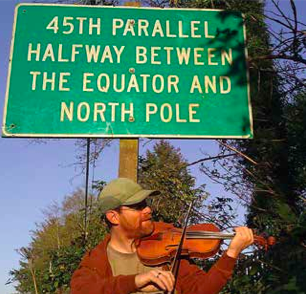 Greg Ewer, founder and artist director of 45th Parallel, shares his love for the violin, chamber music, the Oregon Symphony and the opportunity to push musical boundaries in Portland.

His replies to the following questions have been edited for brevity and clarity.

Where did you get the name for the chamber music 45th Parallel?
I wanted a name that would evoke the area where I live. When I was first driving from Texas and moving to Portland, I remember passing the sign that said 45th Parallel, half way between the equator and the North Pole. That 45th Parallel sign was such an exciting and exotic revelation for me.

When did you first discover Oregon?
While in my master’s program at Rice University, I was a teaching assistant under Sergio Luca. Sergio was the founder of Chamber Music Northwest. He invited me to Portland in 1999 as his stage manager for the Cascade Head Music Festival. A friend from school who was living here took me to Powell’s and around Portland and to the Gorge. That summer I promised myself I would move to Portland.

Did you move to Portland with your sights on the Oregon Symphony?
I didn’t move here thinking I was going to play in the Oregon Symphony. That happened later. I loved the city, so I moved to Portland with the idea I would get into the early music scene and play chamber music with my long-time friend, Adam LaMotte, who in 2012 was nominated for a Grammy. We believed there was an appetite for chamber music. He convinced me it would be a great place to start a chamber series.

When did you move from Texas to Portland?
In 2000 I moved to Portland and started the Magnolia Chamber Music Ensemble with Adam LaMotte and a few other talented friends. We shared a stu- dio in the 333 Hancock Building with a painter, Elise Wagner. For three years we practiced while Elise was painting. It was a great environment. I was working at Paul Shuback’s Violin Shop to pay the bills. In 2001 I started playing with the symphony. The symphony became a big part of my life. I remember it being difficult to deal with the decrease of my chamber work.

You missed the smaller venue?
When you play in an orchestra, the skill set you use is very specific. In addition to orchestral playing, most classical musicians have an extremely strong desire to be active and play their instruments outside of an orchestra. That is just a given.

Did your family history play a role in your musical world?
My grandparents grew up in Berlin. Being Jewish, they knew they needed to leave in the late 1930s. They made their way to New York, and even though they did not play instruments, their world was rich with music. My dad plays both violin and piano. In fact, my dad became a physician but not before having the opportunity to study with the great Russian violinist Tossy Spivakovsky.

What choice did your dad give you regarding music?
I remember this very clearly – I could take violin lessons or piano. My brother was studying piano, and I didn’t want to compete with him, so I choice the violin. By the time I got to high school, I had put in lots of years and hours. In 1983 I started taking lessons from the associate concertmaster of the Houston Symphony, Albert Muenzer, who really inspired me to get good. I loved the way he sounded when he played.

When did you know it was time to move forward with 45th Parallel?
In 2009 I realized it was up to me to create the opportunity for myself. My colleagues would welcome it. Everybody was organizing concerts on the side. I was around an extremely talented and motivated group of musicians. We were all feel- ing a need to play music outside the orchestral repertoire. The orchestra is really fun. It is just this desire to explore and have a voice that is just a little more autonomous and independent.

What is your responsibility as artistic director?
I am the curator. I look into the community for musicians I would like to collaborate with. We bring together musicians who play classical, jazz, folk – or classical and baroque on period instruments. Normally these different musicians would not be working together. The collaborations sometimes result in something new, but other times it puts these different forms of music in an entirely new light. We have worked with musicians from Oregon Symphony, Portland Baroque Orchestra, bands like 3 Leg Torso and Jackstraw, and Irish fiddler Kevin Burke. We have worked with Cantor Ida Rae Cahana and Oregon Symphony Concertmaster Sarah Kwak. Last year we brought the iconic violinist Ida Haendel to Portland. My secret weapon is my wife Becky (marketing and creative director of Portland Jewish Academy and Mittleman Jewish Community Center). In addition to her marketing and graphic design skills, she is on top of all the behind the scenes (activities).

You are bringing chamber music to young audiences. How did that transpire?
My neighbors are teachers at Alice Ott, a small middle school in the David Douglas School District. I learned from them it was a high poverty, high diversity school. I contacted the principal, James Johnston, a real risk taker who was named Oregon’s 2013 Middle School Principal of the Year. I presented the idea of a mini residency where musicians come in and sup- port their music program. I then wrote a grant to the Herbert A. Templeton Foundation. We are involved in classroom instruction, coaching and informal lunchroom concerts.

How is it going?
It is amazing. It is one of the most exciting things I have been a part of in the last couple of years. I see it as being a big success. This is just the beginning; many in the community including the Oregon Symphony have begun efforts to expand it. We are improving the arts in schools. We are doing the work that the community knows is important but just doesn’t always know where to get the funding.

Where can people hear 45th Parallel?
We are at several venues in town. We play at The Old Church. We also play at the Alberta Rose Theatre. I am always looking for new informal, intimate and inviting venues where it is easier for the audience to feel a connection to the people on the stage.

Can you think of someone who gave you great advice?
A long time ago Sergio Luca told me something that really resonated with me: As a classical musician, you will find that it is not as important to be famous as it is be active and make a difference where you live.

What is the difference between a violin and a fiddle?
There really is no difference other than the way you play it. Typically violin is used in classical context and fiddle is used in folk context. But I use the same instrument whether playing classical or folk.