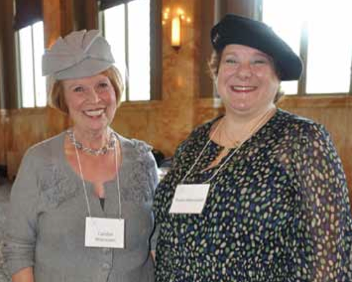 Carolyn Weinstein, a principal broker with The Hasson Company, has more than 30 years of experience in the real estate industry. Her enthusiasm for her job is evident: “I love finding the right home for the right person, it’s just so exciting. It doesn’t make a difference if the house is worth $100,000 or $2 million.”

Weinstein’s passion and expertise combined with her altruism just landed her the 2013 Portland Metropolitan Association of Realtors’ Good Neighbor Award. This presti- gious honor, which recognizes an extraordinary commitment to improving quality of life in the community, is awarded to one of the more than 6,000 Realtors in the Portland metro area. On April 10 Weinstein will receive the award at the Portland First Citizen Award Banquet, which will be held at The Nines Hotel.

Over the years, Weinstein has found great personal as well as professional fulfillment through her job. “I’ve made many, many friends through the business. Now, I work with my daughter. She and I have worked for 10 years – that’s great fun!” Weinstein, who is a Life Member of the Portland Metropolitan Association of Realtors’ elite Masters Circle, entered into her vocation after serving as executive director of Neveh Shalom for two years. An appraiser on the finance committee invited Weinstein to work with her. After a few appraisals, Weinstein soon realized that people, not figures, were her forte. She explains, “Once I passed my exam, I kept getting letters saying, ‘Come work with me.’ Even though people said the real estate market was just on its way down, and it was not a good time to do this, I said I’d try it. So I did,and it’s been a success story ever since.”

Weinstein’s involvement with the Jewish community is as lengthy as her real estate career. Since 1964, she has orchestrated a wide variety of fundraising efforts for the Jewish Federation of Greater Portland. Not only has she personally organized and trained 191 phone solicitation volunteers for the Federation, but she has served as president of the Jewish Federation Women’s Division. In addition, Weinstein has served on the board of directors of the Oregon Jewish Community Foundation, the Jewish Review, and Jewish Family and Child Service. With her daughter, she co-chaired a 2011 event for the Jewish Family and Child Service and the Community Warehouse that raised more than $50,000. Seventy-five percent of Weinstein’s charitable efforts support the Jewish community. She explains, “It’s been very important to me; my life has revolved around Judaism.”

Other causes championed by Weinstein include Dress for Success, the Goose Hollow Family Shelter, Our Children’s Store and the Washington County Adopt-A-Road program. This past year, the Realtor raised more than $28,000 for the Community Warehouse, an organization that redistributes do- nated household furnishings to needy neighbors. The Portland Metropolitan Association of Realtors will donate $1,000 to this organization in Weinstein’s honor.

In addition to serving as a top Portland Realtor and supporting a wide variety of charitable causes, Weinstein also educates schoolchildren and adults about Portland’s historic and architectural riches. She conducts tours through the Urban Tour Group of Portland and has lead mini-missions of Jewish Portland for various federation groups.