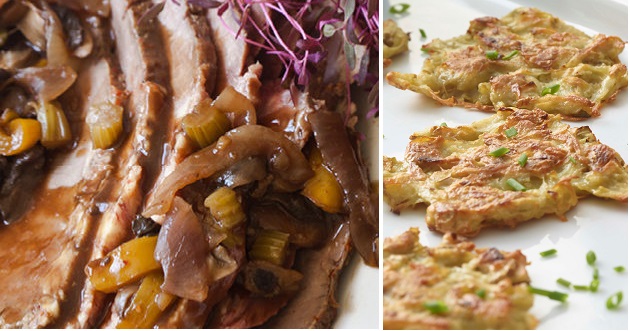 Hanukkah can be a lonely holiday in Portland, especially when it gets cold and dark and you don’t see candles lighting many windows. We’re far, far away from the traditional bastions of cultural Judaism, and perhaps more importantly, their wide selection of delis. In Portland, I’ve mainly experienced Jewish tradition at the dinner tables of friends and family rather than in public places. I hope those of us hosting Hanukkah dinners will be welcoming to those who don’t have a place to go. But if you’re new in town and don’t have anyone to cook for you, or you’re hosting more people than you know how to cook for, we’ve got you covered with this guide to Hanukkah take-out options.

(Note: not everything on this list is certified kosher, so be sure to ask before you order if that’s a concern.)

If there’s one thing that smells like American Hanukkah, it’s the redoubtable latke, marrying our national love of potatoes with our passion for frying the shit out of them. But like most fried foods, the difference between “fresh from the pan” and “sat around for a while” can be significant. I inventoried Portland’s (few) dinner-time latke purveyors, with the added constraint that I didn’t open the takeout box until 20 minutes had elapsed. Applesauce or sour cream I leave to your discretion.

These aren’t potato pancakes so much as lemon-shaped balls of deep-fried mashed potato. Purists and seekers of home-cooked simulacra may object to this geometric innovation, but the more spherical shape does retain heat longer. After 20 minutes the crunchy dark brown shell reluctantly gave way to reveal a warm, creamy interior. They weren’t fork tender, but the increased structural integrity made them basically finger food. (1038 SW Harvey Milk)

To her credit, the server furrowed her brow when I ordered, suggesting some alternatives to the lukewarm latke that awaited me. While the fresh version my companion ordered was perfectly satisfying and traditionally constructed, mine didn’t fare well in the box. The outer radius hardened a bit, while the inner core remained soft and pliable. It still looked the part, but a Kornblatt’s latke is best enjoyed in the deli. (628 NW 23rd)

A dark-horse contender, the latkes at Stammtisch go under the Germanic mouthful kartoffelpuffer. But a potato pancake is a potato pancake, and these represent the form perfected. Two exactingly engineered golden-brown discs lay invitingly in a high-end apple jelly. A tantalizingly thin yet crispy shell surrounds a remarkably warm interior and yields easily to the fork. Salty almost to the point of tasting like bar food, I’d still hold these up as the ideal takeout latke experience. (401 NE 28th)

(Honorable mention goes to Mother’s Bistro, which won’t have Hanukkah food on the menu until Dec. 8, but I can vouch for their matzo ball soup. [212 SW Harvey Milk])

This one’s pretty easy, since brisket’s a popular cut of beef people just happen to eat on Hanukkah. Popular barbeque joints like Reverend’s, Russell Street BBQ, Podnah’s Pit and the People’s Pig all have well-regarded briskets for between $18 and $23 a pound. Half a pound per person should leave enough for sandwiches the next day (an essential consideration).

New Seasons will have leek/ricotta and apple/raisin kugel at their deli, along with other Hanukkah staples. Kenny & Zuke’s hadn’t finalized their menu, but will likely also offer sweet and savory options. For Sufganiyah, the Beaverton Krispy Kreme and Safeway on Southwest Barbur have kosher options; otherwise you can’t hurl a cruller in this town without hitting a doughnut shop with something jelly-filled.

So you have a houseful of guests and a catering budget to match? Not a problem: Both New Seasons and Whole Foods will have Hanukkah hot bars, with the latter offering an eight-person prix fixe for $129.99. Kenny & Zuke’s will have a holiday à la carte menu, and Kornblatt’s will deliver for large orders.

This article appeared in the Nov. 22 Portland Mercury and is reprinted with permission.

Fire up that grill!

A taste of camp

'Getting Hanukkah to go' has no comments