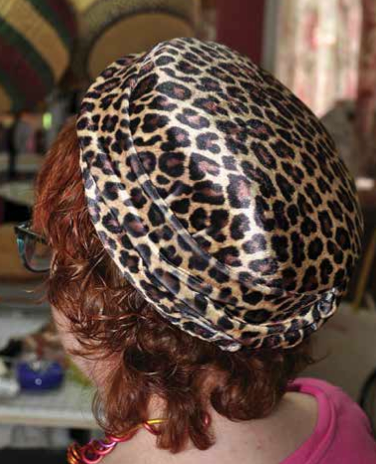 Local artists and art lovers alike eagerly anticipate the annual Portland Open Studios tour, which takes place during the second and third weekends in October, but probably no one is looking forward to it more than Diana Unterspan. Unterspan is a fiber artist who works primarily with wool and silk to create both decorative and wearable art; she recently started making hats, which have become her best-selling items.

“I don’t think there are too many Jewish milliners left,” she observes. If you take the Open Studio tour, you can meet Unterspan in her studio on Saturdays and Sundays, Oct. 12-13 and 19-20, from 10 am to 5 pm. Unterspan’s affinity for both fiber and clothing dates back to her childhood, when she spent many happy hours in her grandfather’s tailor shop. “My father’s father, who lived with us, was a tailor from Minsk,” Unterspan explains. “He started with a shop on the Lower East Side and later moved out to Brooklyn. I remember hanging out there, playing hide and seek among the clothes.”

The feel and smell of the clothes, coupled with hearing the customers speak Yiddish and other languages, captured young Diana’s imagination. Sewing, clothes and fibers became inextri- cably linked with exotic distant places.

“I was a creative child, a combination science geek and cre- ative geek,” says Unterspan. “I was an early reader, and my mom encouraged my odd experiments. Since I was (and still am) physically small and an introvert, my favorite times were spent alone, doing experiments, reading, finding wildflowers and, of course, playing dress up with my mother’s clothes and hats.”

Since Unterspan and her husband moved to Portland in 2006, she has devoted herself full time to her art. Her small home studio overflows with vibrant colors, skeins of wool, bolts of cloth and miscellaneous objects from buttons to pieces of driftwood. Several projects in different stages of development rest on her worktable. On the day I visited, Unterspan was blocking a forest green hat wool hat (shaping the wet wool on a wooden milliner’s form). As the wool dries, Unterspan plays with folds or pleats, trying out different ideas. Damp wool is fungible, which allows for a wide range of experiments. When it dries, it will retain the last shape Unterspan chose for it, but she can always wet the hat again and start over if she doesn’t like the result.

Although she is best known for her hats, Unterspan has only been making them for a few years. “When I moved here I saw the ORA NW Jewish Artists show, and I thought, ‘I have to be a member of this group!’ I was invited a couple years later.” While sitting at her booth at the ORA Celebration of Art, Unterspan worked on a small felt bowl. On a whim, she turned it upside down and noticed it worked equally well as a hat. “So then I made four full-size felted hats and they all sold. Nobody was buying my fiber art, but the hats were selling like hotcakes.” Unterspan enrolled in classes with Dayna Pinkham, whom she calls “the premiere hatmaker in the Northwest.”

“I learned an incredible amount about hat-making,” Unterspan adds. “Forms, ropes, underpinnings, kinds of stitches you use, how to measure people’s heads properly.” Soon Unterspan was selling her hats at craft fairs and galleries in Portland and Beaverton. Custom orders began trickling in. “I hit the big time when I walked into the Real Mother Goose, and they put a dozen of my hats in the main window. The Real Mother Goose is the premiere arts/crafts gallery in America; it’s such a huge honor that they like my work.”

Unterspan’s favorite hat is an updated version of the Jackie Kennedy pillbox, featuring a leopard skin print. Unterspan was inspired by the Bob Dylan song “Leopard Skin Pillbox Hat” from his 1966 album “Blonde on Blonde.”

In addition to her hats, Unterspan makes kippot, tallitot and other Judaica. She also creates framed decorative pieces made of mixed fibers and other objects. Both the prayer and an Alan Ginsberg poem inspired “Kaddish,” one of her favorites. “The dark images filled with small sparkles of metallic threads remind also the living tissue, which lets us move and make changes in the world. All the edges are purpose- fully left raw and unfinished, just like real life.”

Working with fiber, particularly silk – “There’s some- thing about silk; I can smell silk and it’s not the same as polyester” – reaffirms Unterspan’s connection to her Jewish roots. The tactile and olfactory qualities of animal fibers are as important to Unterspan as the art she makes with them. “It’s intensely rewarding to use fibers in their raw state, even to see the animals who produced them. I love the feel and smell of wool and silk in my hands as I work.”

Elizabeth Schwartz is the program annotator for the Oregon Symphony, co-host of the Yiddish hour on 90.7 FM KBOO Community radio and a freelance writer living in Portland.