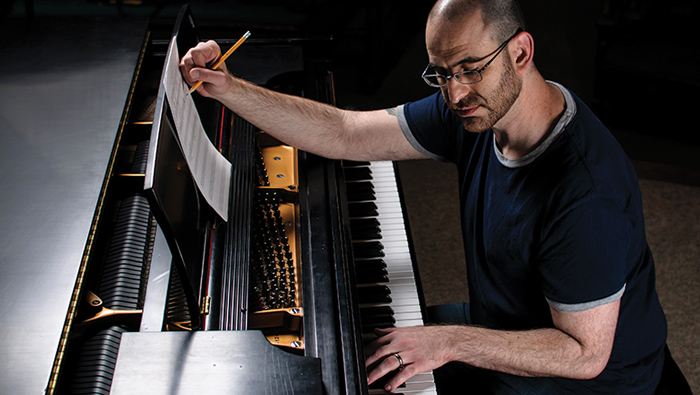 Either way you say it – Music Man or Man, Music! – Ezra Weiss loves jazz. His enthusiasm is contagious, his involvement is impressive. Portland can thank Ezra’s Oberlin College buddy, Zack Hickman, for suggesting that they move to Portland after graduation in 2001. Besides rave album reviews and airtime, he teaches at Portland State University. He leads his own sextet and The Ezra Weiss Big Band. Northwest Children’s Theatre will produce his version of “Cinderella” this winter.

If you are a jazz fan, you may have seen Ezra headlining at some of the USA’s greatest clubs. The list is long and among them are Nighttown in Cleveland; Ryles in Boston; Dizzy’s Club Coca Cola, Smalls and Tonic in New York City;

Triple Door in Seattle; and our own Jimmy Maks before it closed.

The following interview has been edited for brevity and clarity.

At what point did you know music would be your life’s work?

I can’t pinpoint a specific moment or event where I knew I would be a musician. I don’t think I ever really considered doing anything else. In college I considered a double major in music and English, so I could fall back on being an English teacher if the music thing didn’t work out. I quickly realized if there were any chance of becoming a professional musician, I would need to devote 100% of my energy to it. I dropped the English major.

I got my start in musical theater at 10 years old. I was introduced through my dad’s record collection, a lot of great classic shows. About that same time I started playing in the school band. Then rock bands outside of school. Towards the end of high school, I heard Miles Davis’ “Kind of Blue.” I loved how it had the same sense of storytelling as the musicals, with characters and drama. At the same time, it was nonfiction. It wasn’t actors pretending to be somebody, it was real people expressing themselves. They were improvising; it was like they were expressing their thoughts as they were thinking them, just like characters in musical theater. Playing jazz was the closest we could be to being characters in a musical. That’s what made me want to pursue it.

You wrote an article in Jazzed Magazine entitled “The Importance of Listening.” It transcends the art of music and spills into all walks of life. Can you sum up your thoughts?

Listening to music is so important for musicians, especially young musicians. Listening is how we develop our own taste and our own sound and get inspired. Technology has made it easier to have access to music but harder to really listen to it. There’s so much available for free through the Internet that we get overwhelmed. Very different from when I was growing up. We would go and buy an album and listen to it a bunch of times to really get our money’s worth. I advise students to set aside time for listening. I tell them to buy albums and listen to them enough to get their money’s worth.

Who were your jazz idols growing up? Who do you listen to now?

Growing up, I listened to Ray Charles, Frank Sinatra and Carmen McRae. I was more focused on musical theater, first the classic shows and then Stephen Sondheim’s musicals. Towards the end of high school, I got a few jazz albums that had a huge impact on me. Charles Mingus, Herbie Hancock, Miles Davis, Kenny Garrett and Joshua Redman. I still love all those people, but there are a few jazz composers/arrangers today who I listen to all the time: Maria Schneider, Billy Childs and Vince Mendoza. Those three provide me with all kinds of inspiration! There is the songwriting of Joni Mitchell and the sensitivity of Shirley Horn. I find myself constantly coming back to listen to them.

What are you listening for?

Pleasure. Well, that’s an oversimplification. I think I listen to music because it expresses something I relate to, an empathetic connection. Sometimes it can be a sad thing. But there is comfort in hearing the music express an understanding of that sadness. There are times when I find pleasure in hearing new things.

You work with the Portland Jazz Composers Ensemble. What is their mission?

I’m blessed to get to work with the PJCE. I am grateful that they commissioned new music from me. They are really interested in promoting the creation of new music by local composers and making that music connect with our local community. I’ve just started working on a large collaborative piece for them with writer S. Renee Mitchell and vocalist Marilyn Keller. Their Artistic Director Douglas Detrick has been amazing, helping us develop the scope of this piece and how it will connect with the community. PJCE puts so much effort into supporting the creative process.

Did your family celebrate Jewish holidays?

Yes we did. My favorite memory was having our whole extended family come from out of town to our house in Phoenix for Passover. Aunts, uncles, cousins, grandparents – everybody! What a fun time to be a little kid.

You speak highly of Oberlin Conservatory Professor Wendell Logan. What made him stand out?

Wendell Logan was possibly the most knowledgeable person I’ve ever met. He really introduced me to the importance of culture in music, particularly the importance of African-American culture in jazz. I’m teaching jazz arranging now; it’s made me think a lot about Wendell Logan. While composing, I used to ask myself what Wendell would’ve had to say about whatever I was working on. Now I’m asking myself what he would say about my teaching. He was from an older generation. Our relationship was formal. While many students would call him Wendell, I called him Mr. Logan until after I graduated, when he finally looked at me, laughed and said, “Call me Wendell.” He never praised my work directly. I was surprised to hear he spoke highly of my work to others. I learned not to seek his praise but to seek his critiques and suggestions for improvement. And to find what I like in my music for myself, my own voice. By my senior year I’d go over to his house once in awhile, and I honestly don’t really remember what we talked about, just the slow cadence of our conversations. Whatever I know about writing music, I owe to Wendell.

What brought you to Portland?

My college buddy, Zack Hickman, had taken a road trip around the country, and he said he thought Portland would be a great place to live. Zack, Kelly Roberge and I decided we would move to Portland after graduation. Zack got a call to do a short tour, so Kelly and I went to Portland. The singer/songwriter Zack was going to tour with for a few months ended up getting signed to Sony Records, so Zack moved to Boston to continue working with Josh Ritter. Kelly and I were in Portland. Kelly left after a year to go to grad school. I stuck around.

You wear many hats – composer, teacher, bandleader, dad. Which is your favorite?

I love them all. Being a dad is the one I think is the most important. I make that my top priority.

Tell us about a favorite album you produced.

I’m proud of the different albums for different reasons. But I think of them like a photo album. They bring up memories for me of a certain time in my life and where I was at that time. I focus on what they mean to me personally more than on which is the highest quality. I am proud that they are pretty different from each other.

Any advice for up-and-coming artists?

Don’t seek external validation for your work: awards, fame, money, even other people liking your music. You have no control over those things. Just ask yourself what you’re wanting to say with your work, and if your work accomplishes that. If it does, then call it a win. If not, then keep at it until it does. If that’s not enough for you, then a different line of work might suit you better.

Your thoughts on the jazz scene in Portland?

Portland has an amazing jazz scene. For the size of the city, we have a disproportionate number of great players. Some of the greatest musicians I’ve heard in my entire life live in Portland. It would be nice to see enough venues come up for all of these great players to have enough work. But the jazz club scene here ebbs and flows. I’m hoping Portlanders will keep coming out to support live music.