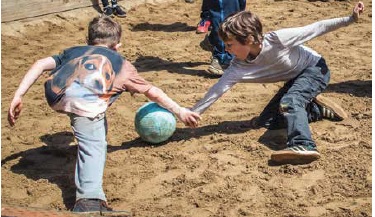 Ga-ga has been a favorite game at Jewish summer camps for decades. Recently, the game has gained mainstream popularity and can be found at camps and playgrounds around the world.

Deemed a “gentler version of dodgeball” the game is played in a ga-ga pit. The ga-ga pit is usually shaped like an octagon or hexagon with short walls atop a smooth surface.

The rules are simple and easy to follow, which makes the game ideal for even the youngest of players. The game begins with a referee throwing the ball into the center of the pit. The players will scream “Ga!” for two bounces and then play begins.

A player can hit the ball with their hands, but picking up the ball and throwing it at another player is prohibited. A player is “out” when a ball hits them at or below the knee. A player who knocks the ball out of the pit is out. If a player catches the ball in the air, the last person to hit the ball is out. The last player standing is the winner.

A second ball can be added to speed up the elimination of players. Once the game ends, everyone is back in for the next round. Those are the basics, but rules, ball types, pit surfaces and sizes can vary widely.

The prevailing thought is that ga-ga originated in Israel and was brought to Jewish day camps by Israeli youth working as counselors. The name ga-ga translates from Hebrew to “touch-touch.”

Another theory says that the game originated at Camp Idylwold in upstate New York. John Crosley was the owner of the camp and a similar game called “Crosleyball” was played at that camp from the late ’50s until it closed in the late ’80s.

But in 2017, Stephen Silver wrote an update to an article he wrote in 2016 where he was trying to find the true origin of the game. He debunked theories that ga-ga started in the Israeli Defense Forces and that Sacha Baron Cohen had played it at a championship level.

Stephen did unearth a theory that holds merit. A man from Maryland named Steven Steinberg said he invented both the game and the name.

In the article Stephen Silver writes, Steinberg was a counselor at Camp Milldale, then a JCC camp in the Baltimore area, as a 17-year-old in the summer of 1975, where his charges were a group of 6-year-old boys. He says he started the game for the same reason it’s still played today at countless summer camps: to keep campers busy on rainy days.

The game, Sternberg says, began when he would take the kids to a covered, wall-less shelter near the woods. They liked to play with a bouncing ball, and in order to keep it from rolling down a nearby hill, Steinberg would place benches on their sides, which kept the ball bouncing back. This led him to develop “a form of dodgeball,” in which the boys would hit the ball and knock out opponents by hitting them below the knee – the idea being that the kids’ shins were about the size of the ball.

As for the name? Steinberg says that during a moment of frustration, he told his campers that they “all look like a bunch of babies”  – at which point some of the kids began chanting “goo-goo, ga-ga,” which soon became the name of the game. When Steinberg had to fit the name on a written activity schedule, it was shortened to ga-ga.

How to explain the theories that place the origin of the game prior to 1975? Steinberg says he doesn’t doubt that similar games may have been developed independently of his version, like the Crosleyball that was played as far back as the 1950s – “it doesn’t take a rocket scientist to come up with a game like this,” he says – but he’s adamant that the name ga-ga was definitely his invention.

Mr. Steinberg’s story was also published in the Baltimore Jewish Times in July of 1992, long before the game gained the popularity it is enjoying today.

So, when you drop your child off at camp this year, and they tell you about the game they played with a funny name that was so much fun, you can smile and say, “Have I got a story for you.”

'Everyone’s gaga for ga-ga' has no comments