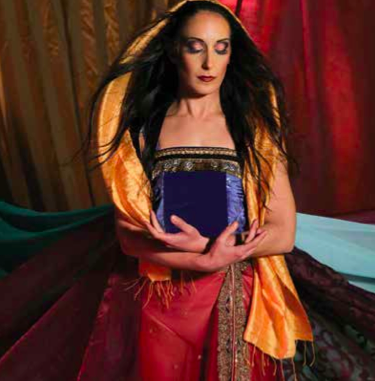 A beautiful, courageous and savvy Jewish girl charms the king, outsmarts the bad guy and saves her people. What’s not to love about the Purim story? But now it’s been re-imagined as a daring ballet driven by the beat of live rock and gospel music resonant with power and spirit. It doesn’t get much better than that. Eugene is the lucky venue that snagged this world premier of “The Book of Esther: A Rock Gospel Ballet,” and the Jewish Federation of Lane County has been quick to reserve a large block of discounted tickets for the Sunday matinee on May 11 as a fundraiser.

This original work was conceived and choreographed by the Ballet Fantastique’s artistic director, Donna Marisa Bontrager, and her daughter, Hannah Bontrager, the dance company’s executive director, in an unprecedented collaboration with the national award-winning UO Gospel Singers led by Andiel Brown.

The legendary Esther is probably the most enthralling of the relatively few women mentioned by name in the Jewish Bible, and one whose gutsy decisions and astute actions resonate today with contemporary women. The ballet’s narrative begins when Queen Vashti is banished by the drunken King Ahasuerus, and most of us are familiar with the high drama that follows. For thousands of years, knowing the story has been no spoiler to the excitement it generates with each retelling. And what a retelling this is!

“It’s that dramatic, theatrical narrative which so attracted us to ‘The Book of Esther,’ ” Hannah tells OJL. “Ever since we formed Ballet Fantastique 14 years ago, it’s been about retelling compelling stories. Unlike classical ballet, which in a more abstract way is about movement set to music, we are starting with the narrative, and then the dance and music grow organically from that. In this, I think we’re unique, not only in Oregon but in the nation.”

Ballet Fantastique’s previous productions include “Pride and Prejudice” set to jazz in the Roaring Twenties, and “Cinderella” as a rock ballet. The core dance members are two men and six women, including Hannah and her sister, Ashley. “We were very much born into a family of dance,” Hannah says. “We used to put on performances in our basement even before we learned to write. We’d rope in our less-than-willing friends and cousins to participate.”

The Ballet Fantastique production of “The Book of Esther” will run Friday, May 9, to Sunday, May 11, at the Soreng Theater in the Hult Center, Eugene. To order discounted tickets ($28 tickets for just $26) for the 2:30 pm Sunday matinee on May 11 as a fundraiser in support of the Jewish Federation of Lane County, contact jewishfederationlc@gmail.com.

Their Canadian-born mother, Donna Marisa, worked for many years with New York ballet companies and was also a concert pianist. She was one of 10 dancers invited to perform as part of the international Feast of the Tabernacles in Jerusalem, Israel.

In midcareer, Donna Marisa discovered the Russian Vaganova Syllabus and became an expert master teacher in that pedagogy. She uses it exclusively in training the members of Ballet Fantastique and believes in never giving an audience something too “predictable.” At the same time, she takes pride in producing original work that is accessible and fun to experience.

For “The Book of Esther,” Mordechai is being played by Andiel Brown, who has a solid background in dance in addition to his leading the UO Gospel Singers.

“With a chorus of 25 voices, we’re not just having the Gospel Singers stand around in the background,” Hannah says. “They’ll actually interact with the dancers at times and be part of the story. The musicians as well are on stage.”

That’s an example of the process involved in each original Ballet Fantastique production. “It’s a conversation between the choreographers, musicians and dancers, suggested by the story, and evolving slowly from each of these sources and the musical score,” Hannah says. “Artistically and logistically, there have certainly been some challenges in staging our production with such a large choral group, but things have progressed harmoniously.”

'Eugene Arts Scene: The Book of Esther Rocks Eugene' has no comments