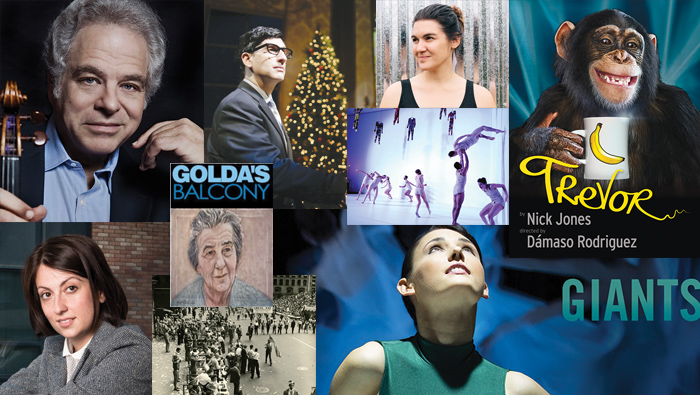 Please join us at the PSU campus for brunch,
music, a panel and performances. Featured reading by
award-winning poet Alicia Jo Rabins, Artist-in-Residence.

Tickets: Free and open to the public
Information: pdx.edu/judaic

PORTLAND CENTER STAGE AT THE ARMORY
Presents
Hershey Felder as Irving Berlin
Nov. 30-Dec. 30
A tour de force performance takes us from Czarist Russia to the Lower East Side — and ultimately the world. Hershey Felder’s masterful creation of character and musical performance makes this evening with
Irving Berlin unforgettable.

TRIANGLE PRODUCTIONS!
Presents
Golda’s Balcony
March 9-April 1
Featuring Wendy Westerwelle as Golda Meir. From the pogroms of Russia to the halls of Knesset, the story of Golda Meir is the story of the state of Israel in the 20th century.

OREGON BALLET THEATRE
Presents
Giants
Oct. 8-15
Trace the evolution of ballet in the 20th and 21st centuries with George Balanchine’s “Serenade” (1935); William Forsythe’s “In The Middle, Somewhat Elevated” (1989); and the world premiere of OBT Resident Choreographer Nicolo Fonte’s
“Giants Before Us.”
Tickets: obt.org
503-222-5538

ARTISTS REPERTORY THEATRE
Presents
TREVOR
Starts Sept. 6
This heart-wrenching new comedy stars Trevor, a 200-pound chimp intent on reviving his showbiz career. Swinging between reality and fantasy, TREVOR takes aim at the nature of humanity and the lies we tell ourselves.

The Economy of Kindness: How Kindness Transforms Your Bottom Line

'Entertainment Spotlight' has no comments