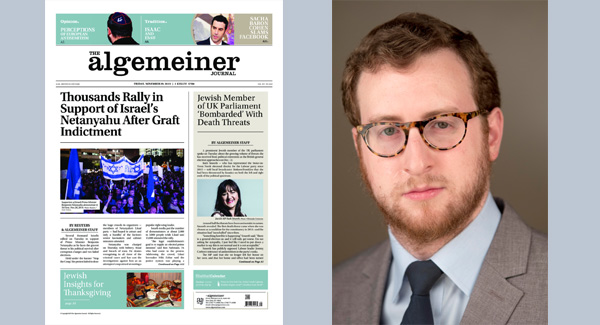 Dovid Efune is the editor-in-chief and CEO of the Algemeiner Journal, better known as The Algemeiner. The Algemeiner is a New York-based newspaper covering American and international Jewish and Israel-related news. He is widely credited with transforming The Algemeiner from a Yiddish language print publication into a significant international online destination for Jewish, Israel and Middle East-related news. Still, he admits, “We have a fantastic team, and we have worked together – there are a lot of people that have taken Algemeiner to where it is today.”

He further defines the work they are doing at Algemeiner, “We view ourselves as the voice for Jewish people and Israel that is able to capitalize and understand all of the great new opportunities of the information age, and make sure that our voice is heard and respected and is present in the great global battleground of ideas.”

Publisher Cindy Saltzman was fortunate to catch up with Dovid, and he graciously answered a few of her questions:

CINDY: What do you feel that Algemeiner is doing, or trying to do differently, then some of the existing organizations or media that are fighting anti-Semitism?

DOVID: Our most valuable currency is credibility. There are rules to journalism, which we take very seriously. We have a particular area of focus and we have a perspective, as all media outlets do, but we’re not advocates, we are not in the advocacy business.

We are journalists, and in that sense, we focus our energies on helping the wider community understand the stories that are as much of an issue and our greatest concern to our community. Journalism is a historic calling that comes with its own set of rules and its own approach.

We’re very particular about ensuring that is the central pillar for everything we do.

CINDY: Do you feel that the United States and Europe are facing the same kind of concerns only on different levels, or is it completely different from what we are all going through?

For example, Islamist anti-Semites target Jewish schools, kosher supermarkets, synagogues and Jewish museums in Europe. Intersectional anti-Semitism exists there as well, In England, the most successful anti-Semitic party in modern Europe is in England – the Labour Party of Jeremy Corbyn.

Al three forms exist in different ways in different environments. I would say the deadliest form of anti-Semitism in America today is the white supremacist anti-Semitism that was the ideology behind the Pittsburg and the Poway shootings.

The ideology with the greatest growth opportunity, especially on American college campuses, has been the intersectional anti-Semitism. Importantly, they have done a pretty decent job at keeping Islamist anti-Semitism at bay, but it still exists in America as well.

CINDY: What do you feel is the biggest threat to a thriving Jewish community today?

From a military perspective, the greatest threatening entity that engages in undermining Israel’s interests at every turn, and therefore the long term safety and security of the Jewish community, is going to be the Iranian enterprise. The Islamic republic and anything that it stands for – the regime as it is.

In terms of ideologically, I’d probably refer to it as the phenomenon of intersectional anti-Semitism. There are different forms of anti-Semitism, most of the more traditional forms have subsequently been marginalized or exist in the margins of society.

To gain mainstream acceptance and growth and carry the opportunity for anti-Semitism – it is contained within the metamorphosis of the ideology.

The form that it takes today is what we call intersectional anti-Semitism. That type of anti-Semitism is championed by the likes of Jeremy Corbyn or (Ilhan) Omar, for example. What is most scary and frightening about it is that it contains within it the possibility for mainstream and widespread anti-Semitism.

For the first time in 70 years, anti-Semitism is becoming a top-down ideology as opposed to a lateral ideology.

We also have the tools to push back. We have a different calling today, and we owe it to those that came before us to seize the opportunities with both hands and take ownership and responsibility to engage in the kind of self-defense that they didn’t have the chance to do in years past. It’s physical, but it’s also rhetorical.

CINDY:  Do you see a correlation between what the politicians are doing and what’s going on with the BDS movement on college campuses. Do you think one builds on the other, or do you feel there is a connection with that intersectional anti-Semitism on campuses with professors?

DOVID: American college campuses and college campuses around the world are the front lines for this brand of anti-Semitism that I’m calling intersectional anti-Semitism. There’s no question about it; I would call it the birthplace of this ideology. It’s also where we see its most pernicious impact and effect.

CINDY: What do you see as some positive changes that are happening in the Jewish community? Positive things that give you hope now that have changed or evolved over the last decade or so.

DOVID: The first thing to keep in mind is throughout history, our future as a people has very rarely been secured by majorities, and most often by the committed few.

That starts with the Exodus from Egypt. There are commentaries on the Bible that say only a small minority of Jews actually left Egypt. It continues with the building of the second temple. Also, there was a small minority, only 40,000 people that traveled with the prophets Ezra and Nehemiah to rebuild what should have been considered the apex of Jewish civilization. The story of Hanukkah that everybody celebrates today, it was just one family that carried the banner. Zionism at the turn of the century was a minority ideology.

I’m also encouraged by Americans. It’s incredible to see the response of society to the shootings that have faced the Jewish community recently. People to people, sports stars, cultural figures, just everybody wants to weigh in and express solidarity with the Jewish community.

I’m still of the view that America is different, and there is something about American society and the fabric of the American mindset that has a great appreciation for what the Jewish people stand for and a sensitivity to the persecution and suffering of others and minorities. We also have to be clear-eyed and understand that no society is immune and safe and insidious ideologies can spread, and they can spread fast, and the effort to keep them in the margins is a constant one.

CINDY: What is your “Why?” Do you feel that there is something else you personally rather be doing, or is this your life work, and did you realize that when you started?

DOVID: I don’t want to project too far into the future because life takes us in interesting places. I think the cause of trying to assist in some way in the Jewish community, and among friends of the Jewish state, to navigate the tumultuous waters and great challenges, but also unprecedented opportunities of the information age, is something I would always like to be very heavily involved in, in one form or another.

CINDY: How do the events you are doing play into everything that you are trying to accomplish? How important are those like your “Jewish 100” and East and West Coat Galas?

DOVID: At the end of the day, that’s how you bring together and mobilize the community. When you’re able to bring people together and talk about your concerns and help support the voices that are sometimes lone rangers in far-flung places, and you can offer them the support of a community and give power to their voices. That becomes the inspiration for the whole year. We have major events in New York and Los Angeles. We have other events throughout the year, that’s 100% a center point of the work that we do.

CINDY: What are your biggest challenges?

DOVID: Biggest challenges – growing fast enough. We need to grow even faster. We’ve been very blessed. We’ve attracted a lot of support for the work that we do. We’ve had our fifth straight year of double-digit growth, but the task that we’ve taken on our shoulders is a monumental one.

The job of educating the public and the community about the power of journalism and the need for investment in journalistic enterprises to help empower the Jewish community is one that’s been a slow upward climb. We’ve made a lot of progress, but we need it to happen faster. That’s the biggest challenge that we have is upping the pace.

'Dovid Efune: Fighting anti-Semitism and building community with the iconic Algemeiner' has no comments