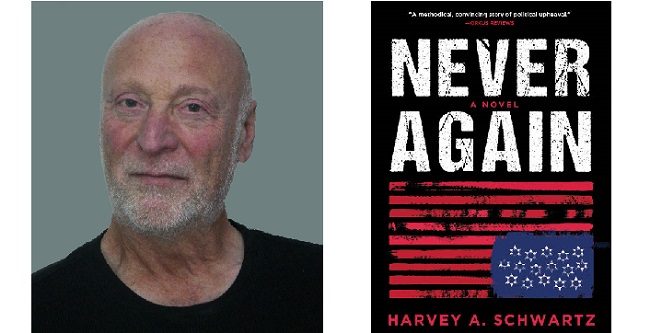 By Harvey A. Schwartz

The touchy feely phrase “What you believe becomes your reality” is making the rounds of pop psychology. People who claim uncommon wisdom promote this phrase as the road to everything – from financial well-being to a fulfilling sex life.

What if you believe, as many folks now do, that with anti-Semitism on the rise, something akin to the Holocaust could happen in the United States? A recent survey by the Conference on Jewish Material Claims Against Germany showed that 58% of Americans believe the Holocaust could happen again. The recent massacre of 11 Jewish worshippers in Pittsburgh can compel us to think the unthinkable. Could organized anti-Semitism become a new American reality? If so, how can it be prevented?

How did we get here?

First, some history. Jews have been hated by one nation or another almost as long as there have been Jews. Not just by biblical Egyptians and Romans but throughout European history. A brief overview for EurAsia:

Even in the United States, Gen. Ulysses S. Grant ordered all Jews expelled from Tennessee, Mississippi and Kentucky in 1862. (Grant went on to serve as president 1869-1877.)

In almost all of these nations, Jews were as fully integrated into their societies as American Jews are today. Before Jews were expelled from Paris, they owned half of the city’s property. Spanish Jews were politically powerful, synagogues were as large and ornate as cathedrals. And within a year, Jews who refused to flee the country or convert to Catholicism were killed.

German Jews filled World War I trenches fighting for their homeland, even fighting against English Jews and French Jews. By 1933 Jews were expelled from the German military, and the concentration camps Dachau and Buchenwald were opened. In 1927, according to a paper published by the International School for Holocaust Studies, 54% of all marriages by German Jews were with non-Jews, just about the same percentage as in the United States today. These German Jews, and probably the English, French, Spanish and even Egyptian Jews felt as safe, as assimilated, as much a part of their country’s fabric as American Jews do today. The lesson of history is that what has happened in the past can happen again in the future. And the present.

How could it happen here? History does not flow smoothly like a river. Dramatic changes happen quickly, set into motion by sudden, unanticipated events. Historians refer to these events as trigger events. The World Trade Center destruction of Sept. 11, 2001, was a trigger event. Since those two airplanes brought the towers down, America, and much of the world, has dreaded the next terrorist shoe dropping. And the next. Attitudes toward Muslims among Americans changed that day, drastically.

The Unite the Right Rally in Charlottesville, Virginia on Aug. 11, 2017, was a trigger event, amplified by President Donald Trump declaring that there were “very fine people on both sides,” fine people including neo-Nazis chanting “Jews will not replace us.” White supremacists, once classified as part of the lunatic fringe, were ushered to a dangerous place of legitimacy on the political spectrum.

I once represented a Mississippi-based white supremacist organization in a free speech case. The organization’s name? The Nationalist Movement. The American president declaring himself a nationalist was a dog whistle to white supremacists throughout the country. Nationalism led to the first and second world wars, to the Holocaust. Charles de Gaulle put it best when he said, “Patriotism is when love of your own people comes first; nationalism, when hate for people other than your own comes first.”

Most recently, the shooting of 11 Jewish worshippers in Pittsburgh was a trigger event. These murders were as blatant and direct as anti-Semitism gets, people killed for no other reason than because they were Jews, killed where Jews would be known to gather. In their synagogue. On the Sabbath. And Trump’s reaction echoed criticism of Jews slaughtered in the Holocaust – that they died because they were too cowardly to fight back. The Jews killed in Pittsburgh would not have died if they would have shot back, Trump said.

These are all trigger events, rungs on the ladder of increasing anti-Semitism in the United States, with acceptance, if not outright support coming from the White House itself. But what sort of trigger event could turn anti-Semitism into public policy, into an American Holocaust?

Are we pulling our own trigger?

I fear that closing the doors to immigrants and refugees may soon build into a fateful trigger event for America. One of President Trump’s first official acts was to ban asylum seekers from predominantly Muslim nations. In recent days, he extended that ban to asylum seekers on the southern border, effectively banning Hispanics. My forthcoming novel, Never Again, imagines a scenario where political turmoil in Israel leads to an exodus of unwanted Israeli refugees to the U.S. Is it too far-fetched to believe that current migrant bans could be extended to Israeli refugees?

America wouldn’t do that, you say. Google the story of the SS St. Louis, a ship stuffed with a thousand German Jews fleeing Hitler in 1939. President Roosevelt sent the Coast Guard out from Miami to turn the St. Louis away. Half the Jewish asylum-seekers on board ended up dying in the Holocaust.

That is but one hypothetical trigger event. The only limit on possible others is lack of imagination. No one can anticipate what the event might be, but the list of possibilities keeps growing. Recognizing that we might be one or two trigger events from America turning on its Jewish citizens, as countries have been doing for a thousand years and more, is the first stop in preventing it from happening.

Harvey A. Schwartz is a retired civil rights lawyer. He spends his summers on a Dutch barge cruising throughout the waterways of France. His new novel, Never Again releases this month. Learn more at www.harveyaschwartz.com.