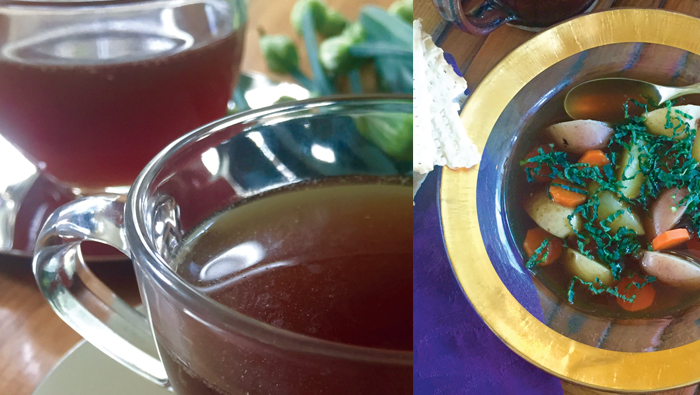 Foods that are restricted during Passover are well known to most observant Jews. Chametz includes anything made with wheat, oats, rye and barley; additionally, Ashkenazi tradition forbids kitniyot, which rules out beans, corn and rice. For the carbohydrate addict, that means no bread, cereal, pizza, pasta or pilaf for eight days.

Feeling satisfied becomes a bit tricky during this time when we seek to remain observant. For those who follow a diet that is mostly made up of lean meat and loads of fruit and vegetables, these restrictions may not feel so noticeable, but for those of us who enjoy our toast and coffee for breakfast, eight days of eggs and Kosher for Passover matzah can become a bit tedious to say the least. If only there were an all-around, delicious, nutritious go-to alternative that is allowed during Passover. Well there is, and it’s called bone broth.

Food bloggers have gone crazy touting the benefits of brewing a big pot of bone broth, not only because of its sensational flavor and versatility, but also for its amazing healing benefits. Bone broth is chock full of vitamins and minerals, is great for healthy skin, hair and nails, improves painful joints and is dirt cheap to make. Generations of seasoned cooks have added chicken feet to their stock to amp up the natural gelatin that, when consumed, actually helps fill excess holes in the gut lining, which leads to better digestive health all around. Some studies indicate when there is plenty of gelatin in the diet, the body’s need for protein from meat sources can be reduced by as much as 50%!
Broth is a traditional food that your grandmother (or great grandmother) likely made often. Start with bones from healthy grass-fed animals (beef, chicken, duck or a combination). Then load up the pot with an array of nourishing vegetables, herbs and spices. Homemade broth is far superior to any boxed version, which may contain unhealthy MSG or added salt. Inexpensive and nutrient-dense bone broth sipped from a mug has been called “Nana’s penicillin” and can be a soothing and immune-boosting meal for someone recovering from illness or injury. With the addition of cooked meat, carrots, potatoes, celery or shredded Tuscan kale, you have a satisfying and filling meal that’s great for lunch or dinner.

Preheat oven to 375º. Rough chop all vegetables (no need to peel). Lay out bones and vegetables among two baking sheets and drizzle with a little olive oil. Place in oven and roast for 1 hour. After vegetables and bones have browned nicely, put them in large stockpot and cover with cold, clear water. Add parsley, peppercorns, salt and bay leaves. Add apple cider vinegar and allow to sit for 20 minutes. (The acid helps make the nutrients in the bones more available.) Bring to a boil, reduce to low and simmer gently, skimming foam as necessary. Allow broth to cook for about five hours. Strain and place in containers. Broth will last up to a month in the refrigerator or for up to a year in the freezer.

Lisa Glickman is a private chef and teacher who lives in Portland. She has made TV appearances on COTV in Central Oregon and appeared on the Cooking Channel’s “The Perfect Three.”
She can be reached at lisa@lisaglickman.com.

'Chef’s Corner: Fill up with Nutitrious Bone Broth' has no comments