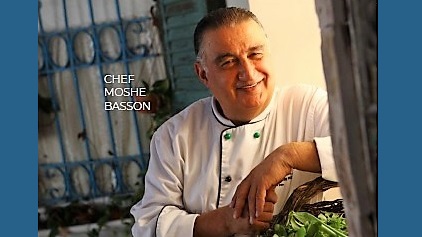 In the heart of Jerusalem, situated at the meeting point between the old and new city, sits The Eucalyptus kosher restaurant. Owner and head chef Moshe Basson specializes in foods that are local and regional, with roots deep-seated in the history of the area and its people. The chef uses wild plants and herbs that he gathers himself on foraging expeditions in the Jerusalem hills.

One of the signature dishes at The Eucalyptus is maqlubah, a traditional dish cooked by the Bedouin people. “I serve it as they would: on a large communal platter, the pot turned over to release the entire dish at once (the name maqlubah, in Arabic, means turned upside down),” says Moshe. 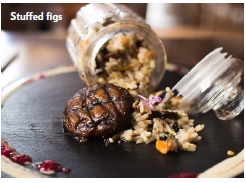 An original dish on the menu is stuffed figs that are filled with chicken and spices. It is such a popular item that it remains in high demand even after a couple of decades. Moshe has also added a vegan version that is also popular.

According to Moshe, one of the simplest dishes to make is Jerusalem artichoke soup. “It has a unique, earthy flavor and takes a bit of expertise to peel it and cook in a way that it gets tender, but it is worth the additional work since it renders a lovely velvety texture,” he says.

Although Moshe didn’t plan on becoming a chef, when his brother opened a restaurant he found himself experimenting, and it sparked a newfound joy of cooking. He remembers as a child growing up next to Beit Safafa, an Arab village, and smells of dishes that were cooked by his friend’s mothers. (He was unable to taste many of these dishes because they mixed meat and dairy in their cooking.)

“I would ask about the spices they used,” he remembers. “I would pick up knowledge of new herbs, and the wild plants the Arab mothers cooked with, and I was tremendously interested in the origins of cooking with them.”

Even though he has traveled around the world, his favorite place to be is in Israel in his garden, feeding his chickens and growing fruits and vegetables.

Moshe was born in Iraq, and his parents moved to Israel when he was 9 months old. Keeping traditions of Jewish Iraqi cooking flourishing is very important to him. “I have brought that element into my kitchen at the restaurant, taking typical regional dishes my mother cooked for me as a child and infusing them into the menu,” he says. These dishes include tomato and mint soup and ingiriya – a beef stew with tamarind and quince.

While many chefs find keeping a kosher kitchen a hindrance to modern cooking, it comes naturally to Moshe, since he looks for plant-based ingredients whenever possible, both for health and flavor.

“We make our own almond milk, which we use to enrich our sauces, or it gets turned into almond yogurt,” says Moshe. “It is by far a more authentic representation of our region than butter or cream, since almonds are indigenous to the area.”

Also, the Jewish emphasis on eating during celebrations is something that gets re-created in the restaurant. Their tasting menus are all served family style, to the center of the tables, so that you are actively sharing and exchanging words over the food, more like at a family dinner on Shabbat or Rosh Hashanah. “Food is tastiest while shared,” he says.

Moshe also believes that cooking brings people closer together. He helped start Chefs for Peace; a nonprofit that aims to give a common goal and voice to cooks from Jewish, Christian and Muslim backgrounds, both Israelis and Palestinians.

“(Chefs for Peace) is about creating a camaraderie and empathetic connection through a shared act of making food,” says Moshe. “I love the tactile satisfaction of preparing food, but much more than that I love the opportunity it gives me to connect to people from all around the world, who are completely different than me in every way, and still find a common language with them through food.” 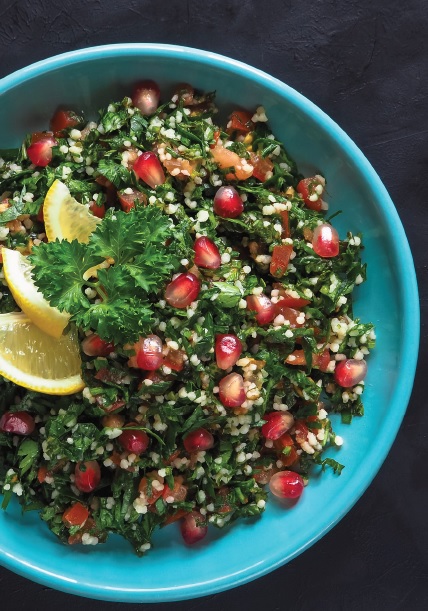 1 pomegranate, remove the seeds and separate from the pith

Finely dice the tomatoes and cucumbers and add to a large bowl.

Finely chop the coriander, parsley and mint leaves, then add them to the vegetables.

Stir the bulgur with a fork to fluff it up, then add to the vegetables.