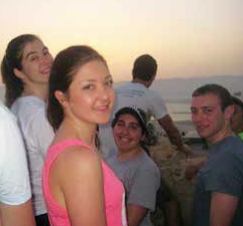 Not every girl gets to lead services chant the entire Torah portion of the  week when she becomes a bat mitzvah. Portland Women’s Tefillah, led by Erica Goldman, has provided that opportunity to girls (and women) of all backgrounds since 1984, when the well-known Jewish educator cofounded the group  embarked on what was to become a 30- year adventure in Jewish music, learning and worship.

“It was one of the most thrilling processes of my life to learn all the can-tillation systems, how to chant from the Torah and Haftarah, how to render the prayers, to learn the traditional prayer chants,” says Erica of her years of preparation to lead such a group. From 1995 until her retirement in 2011, she was a music specialist, middle school tefillah coordinator and choir conductor at Portland Jewish Academy, and she continues to teach at the Florence Melton School of Adult Jewish Learning.

The bar or bat mitzvah, held near the 13th birthday, marks the spiritual transition from childhood to adulthood, when a Jewish child becomes obligated to observe the commandments. Claire Benson, 20, now a creative writing student at Wellesley College, recalls how dramatic that transition was.

As a middle-school student at PJA, Claire prepared for her bat mitzvah under Erica’s tutelage. “Dr. Goldman is a great teacher,” she says. “Her experience with music is vast – unparalleled in our community – and that was a wonderful attribute of her teaching…I had a choice between melodies that I wanted to sing durin services, and she was very attuned to personalizing the ceremony while teaching me as much as she possibly could.”

My mom’s side of the family is Catholic, my dad’s side is Jewish,” Claire notes, “so in order to become a bat miztvah through Women’s Tefillah, I have to convert legally. That was also a very definitive part of the process. I ended up having an Orthodox bat mitzvah. I led the entire service … and did all eight readings plus the Haftarah. Normally a girl at a bat mitzvah would read one or two.”

Claire is active in Hillel on the Wellesley campus, and last summer she visited Israel through Birthright Israel.

Alexandra Perrin, now a 17-year-old senior at Riverdale High School, says that although she is a shy person, she led the entire service at Women’s Tefillah for her bat mitzvah. The bat mitzvah continued at Congregation Kesser Israel, the Orthodox synagogue to which her family belongs. “The luncheon and my bat mitzvah speech were at Kesser, so it incorporated both my shuls,” recalls Alex.

She says Erica was her tutor for the service and Torah reading, and Rebbetzin Aviel Brodkin of Kesser Israel helped her interpret the Torah portion and prepare her speech.

“I had actually learned a lot about that parashah when I was a student at PJA, so to be able to understand it a little more deeply made it even more personal,” she says. “It was very nice to be able to share my knowledge with other people and make my bat mitzvah something special.

“To me a bat mitzvah doesn’t necessarily have to include reading from the Torah or leading the service,” she reflects. “It depends on the individual and what they’re comfortable with. It wa totally my choice to read from the Torah and to lead the service.” Alex said her decision to become a bat mitzvah at the Women’s Tefillah did not arise from the notion “that women play a limited role in Orthodox Judaism. I think that women’s role in Judaism is beautiful and equally as important as a man’s role.”

Alex is active in her youth group, NCSY, and she recently spent a month in Israel on an NCSY-sponsored summer program through The Jerusalem Journey. She also learns with Portland NCSY director, Rabbi Doovie Jacoby.

“Portland Women’s Tefillah provides a place for all women and girls to learn the essential skills of leading a service and celebrate becoming a bat mitzvah in the context of a women’s group,” says Erica. “I think it’s very important to have this option in the Jewish community.”