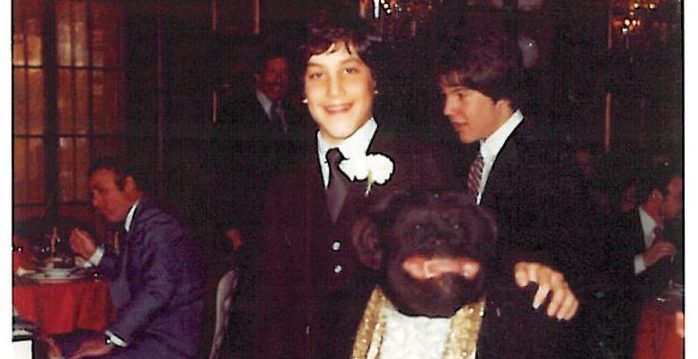 Photo: The author’s bar mitzvah party featuring Mr. Jiggs the chimp was an example of over-the-top extravaganzas popular in the 1970s and 1980s.

Perhaps the most iconic ritual in Judaism, the bar mitzvah is steeped in meaning and tradition. For generations Jewish boys, and more recently girls, have heard the call of the Torah and stepped up to the bimah, ready to assume the mantle of adult responsibility within the Jewish community, just as their parents did before them.

Recently, while contemplating the upcoming b’nai mitzvah (plural form of bar mitzvah) of my twin sons, I found myself wondering how this ritual began and how it has changed over time. Some of the answers I found along the way may surprise you.

Despite the common perception that the bar mitzvah is a timeless rite of the Jewish people handed down from antiquity, the Torah does not mention bar mitzvah. The Torah tells us that the age of Jewish adulthood is 20, because that was the earliest age that an Israelite man could serve in the military and pay taxes. In Pirkei Avot or “Ethics of the Fathers” in the Mishnah, 13 is designated as the age for learning the Torah’s 613 commandments or mitzvot. Some people consider this the reason 13 became the age for becoming a bar mitzvah. The Hebrew term bar mitzvah translates to “son of the commandments.” Bar mitzvah is sometimes translated as “subject to the commandments,” because it is the age when a Jewish boy can fully participate in Jewish life and rituals. He has attained all the rights and responsibilities of being a Jewish man simply by virtue of having turned 13. In addition, he is bound by the ethical precepts and teachings of the Torah. He can read from the Torah scroll, wear tefillin and be counted in a minyan.

The bar mitzvah ceremony originated in 13th century France; however, it did not become prevalent across Europe until the 16th century. It was then firmly entrenched within the Jewish life cycle. Initially, it was a simple, austere ceremony. The bar mitzvah boy was called to read from the Torah, and the father placed his hands on his son’s head while reciting the following blessing: “Blessed be the One who has freed me from punishment because of him.” The father is thanking G-d for relieving him of liability for any offenses committed by his son. While this sentiment may seem rather callous to contemporary ears, it is an acknowledgement of the boy’s independence from his father and his transition to adulthood.

The bar mitzvah ceremony expanded over time to incorporate additional ritual elements. Along with the Torah reading and its attendant blessings (aliyah), the maftir (concluding Torah reading) and the haftarah and their related blessings were added. The mitzvah project so beloved today had its origins in tzedakah given to local charitable organizations by the parents on behalf of their son. Another inclusion was the d’var Torah. The bar mitzvah boy expounds upon either the week’s Torah portion or some other point of Jewish theology or doctrine.

The bar mitzvah evolved again when Jews reached the New World. Initially all Jewish congregations in the New World were traditional, or what we might refer to today as Orthodox, as Reform had not yet emerged as a movement in Europe. By the mid-19th century, however, a large influx of German Jews brought new strains of Judaism that were evolving in Europe.

By the latter half of the 19th century, Reform Judaism had become the dominant branch of the Jewish practice in America. Reform congregations began replacing the traditional bar mitzvah with a new ritual called confirmation. Modeled on the Christian ceremony, Reform Judaism held that age 13 was too early to be considered an adult; therefore, the ceremony took place at age 16. The bar mitzvah was deemed an atavistic holdover from the Old World. In emulating their Protestant neighbors, Reform Jews adopted confirmation as a more dignified, solemn and modern ceremony. Confirmation was also an egalitarian occasion decades before the earliest bat mitzvahs, with girls participating as equals alongside their male peers.

While confirmation may have eclipsed the popularity of the bar mitzvah for a time, the trend in Reform circles after World War II gravitated toward a revival of ritual and aspects of traditional observance. Thus, the bar mitzvah, which never entirely disappeared, made its triumphant return as the preeminent Jewish rite of passage. The return of the bar mitzvah in the Jewish life cycle, combined with postwar affluence, created the perfect storm in the form of the contemporary American bar mitzvah party. What had originated in Medieval Europe as a Kiddush and a light nosh at the home of the bar mitzvah boy expanded to become a festive meal in the boy’s honor. The rising prosperity of Jews in the 20th century ultimately led to opulent displays of conspicuous consumption. The phenomenon of the ostentatious bar mitzvah may have reached its zenith in the late 1970s and early 1980s as evidenced in the highly entertaining book Bar Mitzvah Disco, which takes a fondly nostalgic view of such over-the-top celebrations. My own bar mitzvah in 1981 was emceed by a performing chimpanzee named Mr. Jiggs, who wore a tuxedo, drank cocktails, smoked cigars, rode a small motorcycle and roller-skated among the guests while snapping pictures with a camera. Not exactly PETA approved, but it was a blast!

The 20th century brought a shift in women’s fortunes. The roaring ’20s ushered in an era of sweeping social change that began in 1920 with the 19th Amendment granting women the right to vote. With the confirmation ceremony already having established the precedent of a Jewish coming-of-age ceremony for girls, girls soon insisted on participating in Jewish life on equal footing with the boys (see article on the evolution of the bat mitzvah). The first recorded bat mitzvah took place in New York City, when Reconstructionist Judaism founder Rabbi Mordecai Kaplan’s daughter, Judith, became a bat mitzvah on March 18, 1922. Remarkably, my daughter Sela’s 13th birthday falls on March 18, 2022, exactly 100 years after Judith Kaplan’s historic bat mitzvah.

The b’nai mitzvah offers young people a forum to express themselves and have their voices heard in a manner befitting their newfound adult status.

My sons are studying with a tutor, Aaron Peterson, as they prepare for their b’nai mitzvah. Aaron says the bar mitzvah can help kids with their confidence and self-esteem. “Ideally, you want to give them that experience, just so they have it as part of their identity, of coming to adulthood and having the responsibility of leading the service and leading Torah chanting, that’s a big step. … I think it kind of hits them, ‘whoa, I’m actually in front of all these people, and showing them what I’ve learned, and I’m being given an aura of respect because of what I’ve done.’ It’s something that a lot of students don’t get to have as they grow up – a platform where they can give a speech where they state their opinion.”

As I watch my children go through their b’nai mitzvah journey, I can’t help but marvel at the journey of the bar mitzvah itself. From its humble origins in Medieval Europe to grandiose extravaganzas, it has been a journey of faith. After nearly eight centuries, the one constant of the bar mitzvah is change. Yet no matter how the ritual has evolved over time, the essence of the original ceremony has been retained – that of marking the passage from childhood to adulthood. The bar mitzvah ensures the continuity of the Jewish people by passing the torch to the next generation. After all, it is said in the Talmud that “Whoever teaches his son teaches not only his son, but also his son’s son; and so on to the end of generations.”

The b’nai mitzvah journey has an impact

So what is it like to become a bar or bat mitzvah in the 21st century? Does it just feel like a big test? Is the focus merely on the party and presents? Has the spiritual component been lost?

I recently spoke with my nephew, Jack Koontz, 15, and my niece, Janie Koontz, 16, about their bar and bat mitzvah experiences.

Janie explains how her bat mitzvah journey affected her: “I feel like I’ve become more spiritual, having bonded with G-d. Now you’re an adult in Judaism. It definitely makes you feel stronger and more connected to your religion.” Janie says she wasn’t nervous or scared during her bat mitzvah but instead felt “weirdly calm.” She felt a bit of a letdown afterward because after all those months of intense study, it was over in less than two hours.

“Judaism is going to be a part of my life,” she says. “Now I’m wanting that connection to my religion.”

Jack says becoming a bar mitzvah made him feel as if he “had accomplished something big in Judaism – it’s a good feeling to have.” He also wants to share his Judaism with his wife and kids when he has a family of his own someday.

Avrel Nudelman has been a bar mitzvah tutor in Portland for the past 18 years. He says he has seen the theme of children being inspired to continue their pursuit of Jewish learning.

“The best satisfaction I can get is when I see my former students involved in Jewish life,” says Avrel. “While it is different for everybody, the goal is to make it a positive memory and to make kids want to continue their Jewish education.”

Some of Avrel’s students have grown up and become tutors or even religious school teachers themselves. This is especially encouraging as the bar mitzvah is often criticized as being the endpoint of a child’s Jewish education, when it is really meant to be just the beginning.

While some kids might be nervous or apprehensive prior to their b’nai mitzvah, Avrel stresses: “It’s not a performance. It is a process of putting in the time, connecting with teachers and enjoying learning about Judaism.” 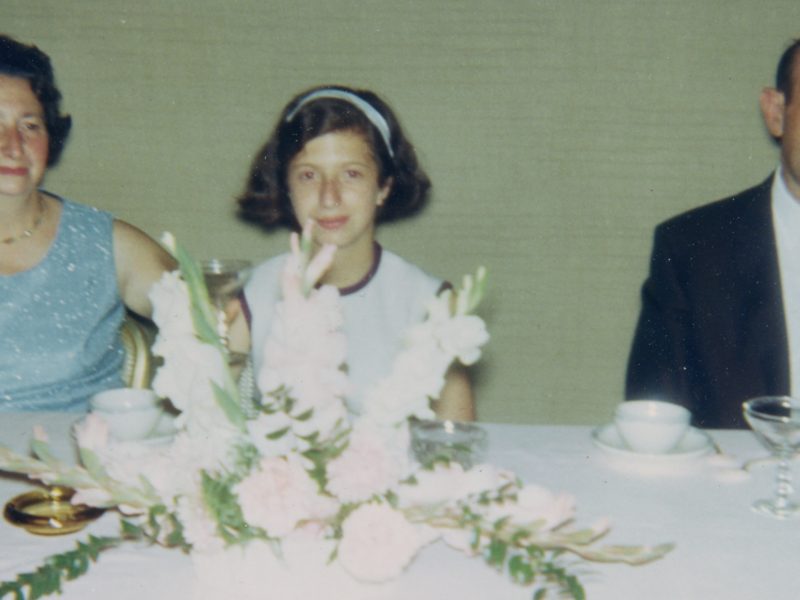 Evolution of the bat mitzvah