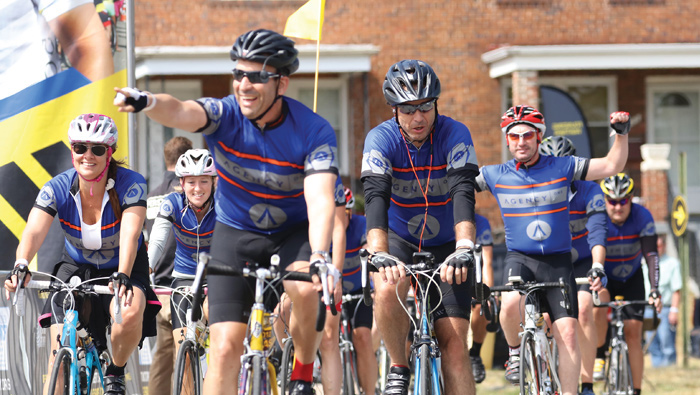 “How could I leave Ronni and our kids with so much more in life to experience?”

“How could I not be there to give Ronni and our kids advice, just as my father does for us today?”

“Who would walk my daughter down the aisle?”

These are just a few of the worries that invaded Jason Mendelsohn’s psyche after discovering he had stage IV human papillomavirus-related tonsil cancer that had spread to several lymph nodes in his neck. After a radical tonsillectomy and neck dissection, in which 42 lymph nodes were removed, Jason underwent seven intense weeks of chemotherapy and radiation to rid his body of the invading cancer cells.

Jason Mendelsohn was 45 years old when he discovered a bump on his neck while taking a financial exam for his Orlando insurance company, The Ashar Group. After an unsuccessful course of antibiotics and steroids, Jason was encouraged to undergo a needle biopsy and CT scan. Those tests confirmed squamous cell carcinoma related to HPV. “I had no symptoms,” explains Jason. “Zero. If I hadn’t felt that bump on my neck, my cancer would have spread throughout my whole body.”

Jason has been happily married for 20 years. He and his beloved wife, Ronni, are raising 14-year-old twins, Ryan and Lauren, and an 8-year-old son, Adam. The thought of not growing old with his wife and lifelong partner and missing out on watching his kids grow into adulthood was heartbreaking for Jason. Immediately after learning about his diagnosis, Jason began filming videos to share with his kids in case he didn’t live to watch them grow up.

“It was devastating,” Jason says. “I had never even heard of HPV-related cancer before my diagnosis.” Luckily for Jason, his treatment was successful and he is now committed to spreading the word about HPV-related cancer. Jason has hit the speaker circuit to help educate people about HPV. He’s participated in the Washington “Ride to Conquer Cancer Bike Ride,” and has raised more than $20,000 to benefit cancer programs at several of the hospitals where he received treatment.

HPV is the leading cause of oropharyngeal cancers (cancers of the back of the mouth and throat). The HPV virus is a sexually transmitted virus that many people are exposed to when they first become sexually active. In fact, genital HPV is the most common sexually transmitted disease in the United States, affecting as many as four out of five women by the age of 50 and, according to the Population Reference Bureau, nearly 50% of males older than 18 are infected with HPV.

While it is known that HPV is passed during intimate body-to-body contact, it’s not completely understood how the virus is spread. Most studies point to oral sex as the culprit. But some data suggest that even French kissing may be enough to pass the virus between individuals.

Women infected with HPV are at risk for developing cervical cancer. Men who contract HPV can not only infect women, but also are vulnerable themselves to oral cancer, throat cancer, infertility and potentially death. According to the Oral Cancer Foundation, white, nonsmoking men in their 30s and 40s are actually the most at-risk population for developing HPV-related oral cancers.

“What people don’t realize is that there is a vaccine that virtually eliminates the risk of contracting HPV,” says Jason. Doctors believe that Jason got the HPV virus back in college, decades before the cancer developed. HPV can lie dormant for many years before manifesting as cancer. Each year around 8,400 people in the U.S. are diagnosed with oral cancer caused by HPV.

HPV vaccines are recommended for all preteen girls and boys between the ages of 9 and 16. The key to successful vaccination is to immunize your children (with the series of three HPV vaccines) prior to their becoming sexually active.
“I tell people … that their kids are likely to get it. But you can virtually eliminate the risk by getting the vaccine,” says Jason. “So why wouldn’t every parent get it for their kids?”

Jason Mendelsohn is on a mission to spread the word about HPV, oral cancer and the effectiveness of the vaccine to protect children from the harrowing experience of facing cancer later in their lives.

“My life was a living hell for 10 months,” he says. “If I can save one family from going through that, by simply giving their kids a vaccine, that’s the most important thing I can do.”