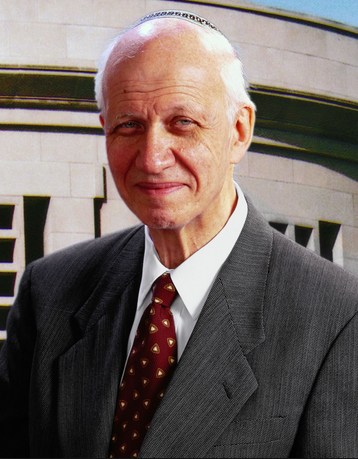 Renowned Jewish-Christian and Holocaust scholar Rabbi Irving (Yitz) Greenberg and noted Jewish feminist Blu Greenberg are coming to Portland for a four-day community experience. “Reshaping the World after the Holocaust: a Weekend of Learning,” April 24-28, is presented by the Oregon Holocaust Resource Center. The Greenbergs, who are husband and wife, will serve as keynote speakers and will lead the weekend of activities, including lectures, presentations, classes and commemorative community events.

“What began as an idea to gather support for the Oregon Holocaust Memorial and Education Endowment Fund has grown into a four-day learning experience for our community,” says OHRC Executive Director Sonia Marie Leikam. The weekend, chaired by community leader Mark Rosenbaum and organized by the OHRC with the help of legions of volunteers, will present a series of events and programs to remember those who suffered in the Holocaust and to learn from the lessons of that horrific chapter in human history. Events are open to the entire community and built on community-wide program partnerships.

“As the generation that lived through the Holocaust gets smaller and smaller, our need to study and understand its implications gets larger and more important,” says Rosenbaum. “Rabbi Yitz Greenberg and Blu Greenberg are seminal thinkers in the area of post-Holocaust studies. Their lectures and study-group sessions present a unique opportunity for the citizens of Portland to listen to and ask questions of the best of the best.” Spread across venues including the Oregon Jewish Museum on opening night, Congregations Beth Israel and Shaarie Torah, Portland State University, the Multnomah Athletic Club and the Mittleman Jewish Community Center, the event will raise funds to preserve and sustain the physical and educational components of the Oregon Holocaust

Memorial. Partnerships with the Jewish Federation of Greater Portland, Portland area synagogues, the Archdiocese of Portland, Ecumenical Ministries of Oregon and educational, arts and cultural institutions are expected to draw a broad audience. A host of individual and corporate underwriting sponsors are supporting the four-day event.

“Our goal is twofold – to raise funds for the Oregon Holocaust Memorial and Education Endowment and to nourish community with programming to engage, inform and inspire audiences,” says Leikam.

For more than 30 years the OHRC has touched thousands of lives – from school- children hearing from a survivor about the events of the Holocaust, to educators receiving resources and training on how to talk to their students about genocide and human-rights violations, to casual visitors to Washington Park who come upon the Oregon Holocaust Memorial unexpectedly, to survivors and their families who find at the memorial the opportunity for peaceful contemplation.

Rabbi Greenberg is a leading Jewish thinker who has written extensively on post-Shoah theology, on the relation- ship of Judaism and Christianity, and on the ethics of power and religious/ cultural issues of pluralism after the Holocaust. He served as executive director of the President’s Commission on the

Blu Greenberg is an American writer specializing in modern Judaism and women’s issues. She is the author of On Women and Judaism: A View from Tradition (1981) and Black Bread: Poems, After the Holocaust (1994). She is active in the movement to bridge Judaism and feminism. In 1997 and 1998, she chaired the first and second International Conference on Feminism and is co- founder and first president of the Jewish Orthodox Feminist Alliance. She also has tried to build bridges between women of different faiths by helping to set up “Women of Faith” and by her involvement in the “Dialogue Project,” which seeks to unite Jewish and Palestinian women.