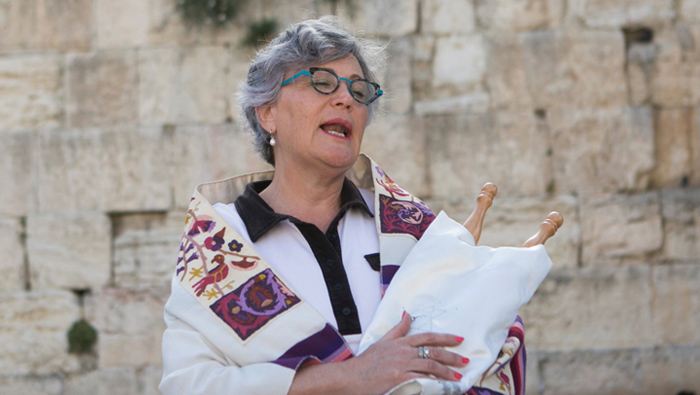 Founded in 1988 to secure women’s rights to pray and read Torah at the Western Wall, Women of the Wall has become not only a battle for women’s status and pluralism in Israel, but also a role model for women seeking parity in other countries and religions.

“This is a marathon and we still have a long way to go,” says WOW Executive Director Lesley Sachs, who will be in Portland April 24-26. In Portland, Lesley will meet privately with a variety of groups and present a public update April 26 on the accelerated pace of the marathon that has resulted in significant steps from Israel’s Supreme Court and government in 2017. “I’m optimistic change is coming,” says Lesley.

“The Western Wall is the most visited site in Israel, both by visitors and Israelis,” she says. “It is the heart of Judaism. … The Western Wall is our center in so many ways, so the battle to keep women quiet there of all places is so meaningful.”
WOW seeks to enable women to pray at the Wall with the four Ts: Tefillah, Tefillin, Tallit and Torah.

But in 1988 when the First International Jewish Feminist Conference held services at the Kotel, services were disrupted by verbal and physical assaults from ultra-Orthodox men and women. Those disruptions have continued over succeeding decades.

Every Rosh Hodesh, WOW holds prayer services in the Women’s Section of the plaza. “It’s very violent. Ultra-Orthodox women stand with whistles and shout. We are double body-searched (to ensure no woman smuggles a Torah into the plaza). … We have so many women join us, but it’s not easy. We’re all suffering abuses and bruises.”
Among the women who have joined WOW for Rosh Hodesh are Neshama Carlebach, who detailed her experience in the March issue of Oregon Jewish Life, and Portland Rabbi Rachel Joseph.

“When I prayed with Women of the Wall 10 years ago as a rabbinical student, it was a transformative experience,” says Rabbi Joseph. “I was filled with gratitude and pride. Yet, despite all the pride, I also felt remarkably sad. As a typical North American Reform Jew, I had never before felt afraid at the Kotel, but this day was different. The throngs of angry, shouting, shoving people surrounding us had a look of malice that was shocking. On our way out, people threw water bottles, and a classmate of mine was hit by a rock. How, in the Jewish Homeland, could any Jew – let alone Jews praying at our holiest site – be treated that way by their own community?”

“I never imagined that in 2017, women would still be prohibited from raising their voices in prayer at the Kotel. However, as much as ever before, the religious extremists continue to hold authority and power over all Jews in the State of Israel – from school funding to liberal rabbinic recognition – and over all activity at the Kotel.”

Lesley says that the Western Wall administrator, Rabbi Shmuel Rabinowitz, “runs the Wall not as an Israeli or Jewish site, but as his own private synagogue.”

Lesley has been arrested five times at the Kotel – four times for wearing a tallit and once for smuggling a Torah into the Western Wall plaza. Though courts have ruled women have the right to read Torah at the Wall, Rabbi Rabinowitz created a regulation prohibiting anyone from bringing a Torah into the plaza. Men are permitted to borrow one of the 200 Torah scrolls kept there, but women are not permitted to use one.

The pace of change picked up in 2009 when the social media revolution enabled WOW to bring its narrative to journalists and Jewish communities around the globe. Progressive and liberal Jewish groups in North America and elsewhere began to urge the Israeli government to recognize religious pluralism, especially as it concerns the status of women.

“It is focusing attention on the point that the Israeli government does not accept any way of being Jewish that is not Orthodox,” says Lesley, adding that Diaspora Jewry is concerned about Orthodox control of marriage, divorce and especially conversions.

“Revolutions such as this don’t happen a lot in a person’s life,” says Lesley. “It’s exciting and invigorating. This is a battle to engage and involve and influence Israel and North American Jewry.”

When Lesley visits Portland this month, she will share the ongoing battle and the latest developments with Portlanders. The Portland visit, part of Lesley’s four-state tour, is sponsored by the Jewish Federation of Greater Portland in partnership with Congregation Beth Israel.

“The Women of the Wall is an important movement that increases religious pluralism in Israel,” says JFGP President and CEO Marc Blattner. “The Jewish Federation remains supportive of openness and inclusion in regard to Jewish tradition and practice.”

Rabbi Joseph, CBI’s associate rabbi, notes that the Reform Movement and Congregation Beth Israel have always supported pluralism in Israel and egalitarian prayer at the Kotel.

“The issue of civil and religious rights for non-Orthodox Jews in Israel is one of the most important issues facing Progressive Judaism worldwide,” says Rabbi Joseph. “And the Reform Movement is lucky to have a political voice in Israel through the Israel Religious Action Center led by Anat Hoffman,” who also serves as board chair of Women of the Wall.

“I am excited to bring this conversation to the Jewish community of Portland and Congregation Beth Israel,” says the rabbi.

“I am forever hopeful that when I return to Jerusalem, I will feel no hesitation or anxiety when I wrap myself in my tallit at the Kotel, singing out loud alongside women and other Reform Jews without scrutiny or fear of repercussions,” she says. “It is said that, among other reasons, it is so powerful to pray at the Kotel because you have the eyes of all of the Jews of the world on your backs, as they face east to pray. Now, the eyes of every Jew in the world should be on the Wall and the Israeli government as the deal for egalitarian prayer plaza stalls.”

In the first three months of this year, Israel’s Supreme Court and government have moved to address those issues. On Jan. 11, the Supreme Court ruled that the Western Wall administrator and state agencies “must explain why the petitioners should not be allowed to pray in accordance with their custom at the traditional plaza, or alternatively allow them to pray in accordance with the custom at a place which has access to the Western Wall similar to the traditional site.” At the end of February, Prime Minister Benjamin Netanyahu appointed Knesset minister Tzachi Hanegi to find a compromise in the next three months.

Lesley says she hopes that results in Robinson’s Arch finally being upgraded into a proper prayer area. Located on the south end of the Western Wall, the arch supported a staircase that led up to a gate into the Temple Mount. Boulders that have fallen over the past two millennia make the area look more like an archaeological site than a prayer plaza. The current wooden platform, which Lesley says resembles a parade platform with scaffolding, does permit people to get close enough to touch the Wall. But it needs to be a larger, more permanent structure. Additionally, access to the lower part of the Wall on the Herodian road needs to be expanded by removing fallen boulders.

If the area is turned into a pluralistic plaza with equal access to the existing plaza, Lesley says, “Most people from North America and Israel will choose to come to the pluralistic plaza because that is the way they pray. This new plaza will become ‘The Plaza.’ ”

The pluralistic plaza would include a low symbolic mechitza setting aside an area so that Orthodox women who wanted to pray with the four Ts could do so in a women’s-only setting. When full access to the Wall is available at the arch, Lesley believes it also will meet the needs of Orthodox women who split from WOW believing the arch is an unsatisfactory location for prayer.

The desires of the ultra-Orthodox also would be satisfied by the new plaza.

“We would leave the women’s section (of the current plaza) to any woman who wants to continue to pray according to Rabbi Rabinowitz’s outlook,” says Lesley. “When we have an alternative, we will leave their area. This will be a respectful thing for the ultra-Orthodox women, too. That is the beauty of our agreement.”

In addition to changing the status of women in Israel, Lesley says the movement also has a lot to teach women involved in other battles. Mormon women seeking to enhance women’s status within their religion have been inspired by WOW. In 2015 a young Mormon woman invited Lesley to participate in a panel discussion on Women and Religion at the Parliament of the World’s Religions, an international convention that drew about 9,500 people to Salt Lake City.

“She told me, ‘Women of the Wall are our heroes, our role models,’ ” says Lesley.

Lesley believes many women’s movements can look to WOW for inspiration.

“Participants in the Women’s March can learn a lot about resilience from the Women of the Wall,” she says. “A lot of North American women feel they will need to be vigilant to retain their achievements for women’s rights over the past few decades.”

Prayer parity is not Lesley’s first battle for women’s rights in Israel.

“I have been a feminist activist ever since I finished my army service,” says Lesley. “When I was in the army, women held menial positions. … The hierarchy was so clear and sexual harassment was horrible at the time.”

So when she started college in Haifa, she began volunteering at Women to Women. She moved to Jerusalem after graduation and began volunteering at the Israel Women’s Network, where she soon joined the staff, ultimately rising to executive director. The Network relied on legislation and litigation to improve women’s rights in Israel and especially in the Israel Defense Forces.

“We represented a woman (Alice Miller) who wanted to be a pilot, and we won and we changed the entire IDF.”

Now women serve in virtually every position in the IDF.

“Opening up the IDF was closure of a circle for me,” says Lesley.

Though at that time Lesley did not herself pray at the Western Wall, she began volunteering with WOW and became the executive director in 2008.

She describes the ultra-Orthodox assault on women praying halachically at the Wall as patriarchal and chauvinistic. “It’s not about religion, it’s about power and dominance,” she says.

“We set out to pray with the four Ts at the Wall,” says Lesley. “We are accomplishing and changing so much more.”